The Board of Education on Monday took formal steps toward allowing police K-9 dogs to search school property for drugs. 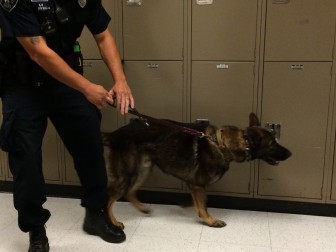 “The policy from the Board of Ed really speaks to a belief in the importance of having substance-free schools,” Luizzi said at the meeting, held in the Wagner Room at New Canaan High School. “I have been in schools that had searches. It can be difficult, complex to put in place, but certainly worthwhile.”

Under the draft policy— based on a template supplied by the Connecticut Association of Boards of Education—the Board of Ed would “permit the administration to invite law enforcement agencies or other qualified agencies or individuals to search school property with dogs trained for the purpose of detecting the presence of illegal substances, when necessary to protect the health and safety of students, employees or property and to detect the presence of illegal substances or contraband, including alcohol and/or drugs.”

Luizzi said he has met with Police Chief Leon Krolikowski and that the draft policy had been reviewed by the chief. It’s similar to what’s been adopted by school districts in towns such as Wilton, Greenwich, Monroe, Shelton and Brookfield, Luizzi said.

The school board’s action follows strongly worded comments in April from both police officials and residents urging the district to allow the K-9 searches. Police since 2015 have asked for it. The question resurfaced earlier this year following the arrest in April of a New Canaan High School coach after authorities found him to be in possession of 20 bags of heroin. (The arrested man’s coaching permit was found to have expired, and a recent Board of Ed meeting, the NCHS athletic director outlined new steps the district is taking with respect to ensuring proper certification as well as some common difficulties surrounding the certification process.)

Under the draft policy the Board of Ed is considering, the use of trained sniffing dogs would be subject to the administration’s authorization, and the principal or a designated person would be present during the search.

Also, parents and students would be notified of the new policy through its inclusion in a handbook as well as on the district’s website.

All school property—lockers, classrooms, parking areas, storage areas—would be searchable under the policy. Even so, dogs will not be used in rooms occupied by people except for demonstrations, and in those cases the dog may not sniff anyone, according to the draft policy.

Individuals would not be subject to a search, under the draft policy, and all sniffing dogs would be kept away from students.

Only the dog’s handler would be able to say what constitutes an “alert” by the animal. If the dog does alert his handler in a specific place, “the student having the use of that item or place or responsibility for it shall be called to witness the search,” the draft policy said.

“If a dog alerts on a locked vehicle, the student who brought it onto district property shall be asked to unlock it for inspection.”

Before conducting a search that results from an alert, official will try to get the relevant student’s consent and “an effort shall be made to protect the student’s privacy to the greatest degree possible,” the draft said.

It continued: “If because [of] a dog alert, a student’s property is searched, the student’s parents shall be notified by the school administration. Law enforcement agencies will be given full authorization to investigate and prosecute any persons found to be responsible for illegal substances on school property.”

Board member Penny Rashin said, given that the searches could take place at the elementary and middle school levels, she was concerned about a provision in the draft policy regarding efforts to obtain the consent of student’s prior to searches. Luizzi said the board could discuss creating an age limit for that.

Board Chair Dionna Carlson asked what happens if a student declines to give his or her consent for a search.

According to Luizzi, at that point the administration could choose to search an item such as a backpack anyway if it had “probable suspicion,” though police would not be authorized to conduct such a search, as law enforcement abides by a more rigorous standard of “probably cause.” If at that point district officials found something illegal, it would be incumbent on the school to turn it over to police, Luizzi said.

Board of Ed member Maria Naughton asked why one piece of the CABE guidance regarding communication with parent had been eliminated—a sentence saying that “the school shall host an informational meeting for parents and their children regarding this policy and practice”—saying simply including the policy in the student handbook was “too passive.”

Naughton suggested holding an information session for parents or making the policy part of Back To School night.

Luizzi said the challenge is that the policy, as written, assumes the information session would be annual.

Carlson suggested that the policy could be communicated to parents via email.

Board members decided to take up the draft policy as a second read during the group’s Aug. 20 meeting, with an eye on adopting it ahead of next academic year.