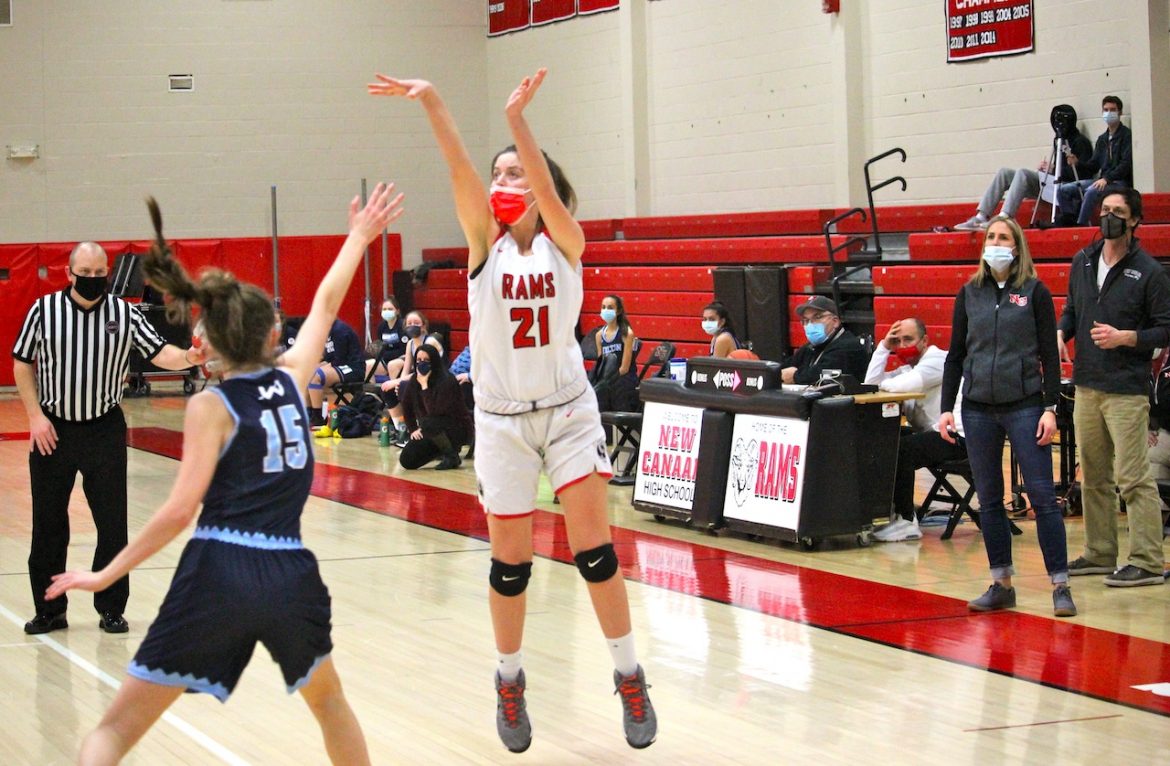 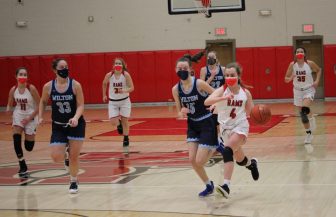 Saturday afternoon against Wilton the Rams almost matched that total in the first quarter alone en route to a 57-23 blowout win over the Warriors.

“The girls showed up to play today,” New Canaan head coach Kim Palmer said. “Everybody had an impact and it’s great to see that, when you can get a real true team win. We shot well and one of the things I’m most proud of is that we took care of the ball. Turnovers have been our Achilles Heel this year and today we were able to control the ball and make smart decisions.” 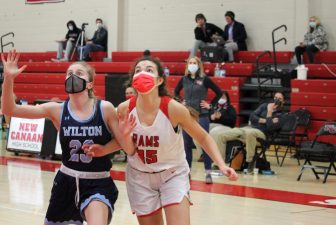 A dozen New Canaan players landed in the scoring column, led by Junior Meghan Driscoll who had 12 points, all on three-pointers. Junior Anna Barnard scored 11 and senior co-captain Emma Gibbens had 8 points for the Rams, who improved to 2-2 on the season.

New Canaan opened by scoring the first 18 points of the game. Driscoll set the tone early, draining a three-pointer from the corner for the contest’s first points at the 7:24 mark and adding another trey a minute later for a 6-0 lead. Sophomore Lucia Crovatto hit a free throw and Gibbens sank a jumper from the foul line to extend to a 9-0 advantage halfway through the first quarter. 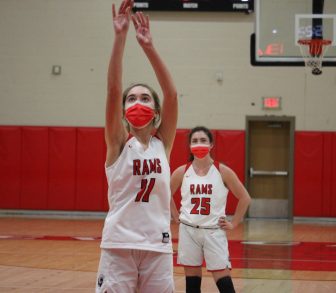 Senior co-captain Cameron Murphy banked in a shot to make it 11-0 and sophomore Natalie Plosker took a feed from senior co-captain Quinn McKiernan and laid it in to give the Rams a 13-0 lead with 2:51 left in the quarter. Barnard sandwiched two baskets around a McKiernan free throw for an 18-0 score with 1:26 remaining in the opening quarter.

Wilton finally got on the board with 56 seconds left as Anna Joy hit a foul shot. Junior Faith Hibbert hit a three, Senior co-captain Olivia West added a field goal for the Rams and Ashleigh Masterson added one for the Warriors to make it 23-4 after one. 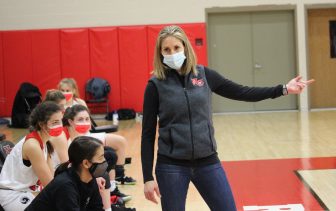 The Rams continued to build their lead in the second. Sophomore Katherine Wronski came off the bench to pace New Canaan with five points in the quarter. Sophomore Maddie Donaldson added a three and Plosker, Gibbens and junior Sophia Rwambuya added buckets for New Canaan which outscored Wilton 14-4 in the quarter for a 37-8 halftime lead.

New Canaan continued to add to its advantage in the third. Driscoll hit a pair of three-pointers and McKiernan added another. Meanwhile the New Canaan defense constantly forced Wilton turnovers and held the Warriors to just a pair of free throws in the third quarter. Senior Abby Van Dussen provided a big defensive lift off the bench for the Rams, who had a 46-10 lead heading into the final stanza. 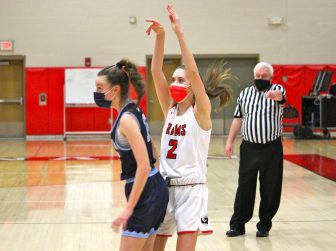 Cameron Murphy with a shot for NC. Credit: Terry Dinan

Wilton—playing its first game of the season due to COVID protocol—managed to find some offensive rhythm in the fourth, outscoring the Rams 13-11. It was too little too late as New Canaan coasted in the final minutes for its second win of the season.

“One of the things we talked about before the game was confidence,” Palmer told NewCanaanite.com. “We didn’t have a big scouting report on Wilton since this was their first game. So we just focused on ourselves and being confident in our strengths and doing whatever it takes to get the W. That means everyone has to participate in some form or fashion. And that’s what happened tonight.”