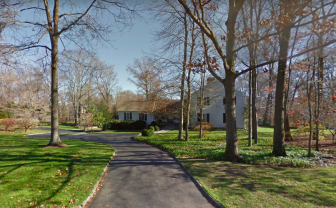 The Butler Lane neighborhood of the Airbnb rental. Streetview photo

According to Planning & Zoning Commission Chairman John Goodwin, “there is a disconnect” in applying the regulations to Airbnb.

“It’s definitely an item to discuss,” Goodwin said at P&Z’s May 29 meeting.

He referred to an email from Butler Lane resident Dave Hunt that NewCanaanite.com obtained following a formal request.

According to Hunt, it’s “quite disconcerting to have transient, total strangers in a very much family-friendly neighborhood.”

“They park overnight on the street illegally, and we have had several vehicles driving over the curb on the edge of our lawn—though I can’t say that any have been her customers, the frequency of problems has risen since she started running the Airbnb,” Hunt said in the letter. “I have not asked the Police to enforce this, but am about to do so.”

The New Canaan Police Department’s public information officer said no such complaint has been received.

A search of Airbnb‘s website shows that four New Canaan homes for short-term rentals through the service—one around lower Weed Street ($333 per night), a four-bedroom home in the same area advertising as “an artist’s retreat” ($180), a house below the Merritt with a pool ($140) and a house on a cul-de-sac near the parkway’s Exit 36 ($95).

Hunt said there has been “only one untoward incident,” in which one tenant “wandered (evidently) drunkenly up her neighbor’s driveway.”

“But that neighbor has 4 children under the age of 10 and is quite reasonably concerned about allowing them out to play unattended in their own yard with the Airbnb next door,” Hunt said.

He continued: “It seems to me totally wrong to have a commercial establishment in a residential neighborhood (except for the few preexisting things like a couple of nurseries, etc. which are grandfathered in). This is nothing more than a small hotel business.”

Goodwin said P&Z would review Hunt’s email and take up the matter at a future meeting.

“In any case, I would hope the town can find a way to regulate these activities, if they have to be allowed at all, so that all neighborhoods can continue to feel safe and maintain the character they have always had, which has never included transient occupants,” he said in his letter.

P&Z’s next regular meeting is scheduled for June 26.