A set of proposed zoning regulations now before the town risks punishing the New Canaan Historical Society as the donor- and member-supported nonprofit pursues a long-term goal of developing an “Education Center” on its campus above God’s Acre, a member of the organization’s Board of Governors said last week. 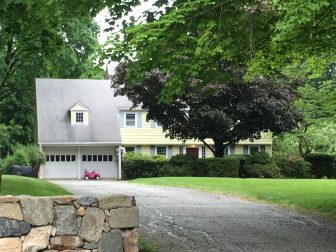 The rather specific requirements for a “child care center” that the interim town planner has proposed for the New Canaan Zoning Regulations “could, under some circumstances, be punitive to the New Canaan Historical Society” by preempting the organization’s plans, Nick Yanicellli told members of the Planning & Zoning Commission at their regular meeting.

“I trust that P&Z reviews every site plan for anything that happens, and will have an opportunity modify and deny certain aspects of the plan, under a special permit,” Yanicelli said at the May 29 meeting, held in Town Hall. “But it has to be clear this is not ‘spot zoning’ because somebody has another idea of what should go there instead of an Education Center, and while everything else is grandfathered, the Historical Society shouldn’t be precluded from moving forward.”

He added that, “to my knowledge, the town has never ever supported the Society in any way, shape or form.” 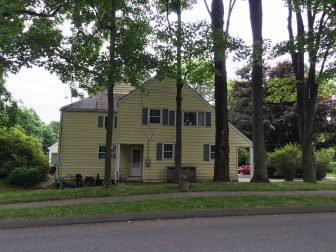 The same house as seen from the access road to The Inn. Credit: Michael Dinan

“It is the repository of all the essential facts and reports of the town. It houses all the archival records related to the town’s history and it is a resource for town officials, local businesses and residents throughout the community. It is long past time for the Town of New Canaan to kindly reach out and support the Society, instead of trying to put up some obstacles against its future.”

The comments come as P&Z considers proposed new regulations regarding child care centers in New Canaan—an effort kickstarted after the Historical Society signaled that it was pursuing such an operation for a 3,585-square-foot Colonial that sits on .88 acres at 65 Oenoke Ridge Road, adjacent to the organization’s main campus. Yanicelli noted in his comments that the Historical Society is in discussions with a neighboring nonprofit organization to do a “land swap” that would open up the possibility of an Education Center.

Currently, a property owner may run a day care center or nursery school in a residential zone in New Canaan with a special permit from P&Z. The regulations require that, first, there’s adequate parking and pick-up and drop-off areas, and second, that the facility is operated by a resident of the property (see page 45 here).

In January, an attorney representing the New Canaan Historical Society proposed that the regulations also allow a religious institution, club, organization or philanthropic group to meet that second requirement.

The attorney, Amy Zabetakis of Darien-based Rucci Law Group, said the change was intended to broaden the regulations’ language, adding that day care centers are licensed and regulated by the state, according to minutes of the Jan. 30 meeting. If approved, she said, existing nursery schools would be grandfathered.

Another attorney, Ed Mellick—speaking on behalf of Joseph Bucciarelli, owner of an Oenoke Lane property directly across from the Historical Society’s house—said in January that the proposed text amendment should be considered in connection with a specific application.

“He expressed a concern that the proposed text amendment would make existing day care centers/nursery schools non-conforming,” according to the minutes. “In addition, he questioned why the New Canaan Historical Society was getting into the day care/nursery school business and asked the Commission not to make a decision at the current meeting.”

For the next P&Z meeting, Zabetakis submitted a slightly revised version of the new proposed amendment. In it, she removed the language ‘nursery schools’ (which the state doesn’t use), instead defining what would be allowed by P&Z with a special permit as “day care centers” licensed by the state so long as they, first, made adequate provisions for parking, pickup and drop-off, and second, that the facility is operated—not by a resident—but by a religious institution, club, organization or philanthropic group.

Interim Town Planner Keisha Fink prior to the Feb. 27 meeting supplied P&Z Commissioners with a review of how nearby towns handle such facilities in their own regulations. Though they’re uniformly general—Darien, for example, allows child care as a permitted accessory use, or principal use by special permit—Fink brought forward a proposed set of regulations that appear far more detailed and, in some cases, restrictive.

For example, the conditions for a special permit on a “Child Care Center” would include a restriction that “no area of recreational activities shall be located within 150 feet of the front yard property line” and that “if the center is located in a single use freestanding building, the center must be adequately sound insulated so as to guard against noise interference with neighboring uses.”

“The uses shall be in a building on a lot having such size, shape, landscaping screening, outdoor play yard space and parking so as to provide for the health and safety of the children using the facility,” the proposed regulations said.

Nancy Geary, the Historical Society’s executive director, told P&Z at its May 29 meeting that she was troubled by some aspects of the proposed text changes. For example, she said, “recreational activities” are not defined, so it’s unclear what children would be allowed to do within 150 feet of the front property line.

“If that is supposed to be a playground or some kind of fixed structure that can’t be with 150 feet, I don’t really understand the reason for that distance,” Geary said. “If you look at any area nursery schools—they’ll be grandfathered in, because this would not apply to them—but none of them would be in operation. So if this is truly a safety issue, 150 feet, then the other schools that are existing are not safe as it is.”

She noted that P&Z would be able to see during the special permit process exactly what a prospective day care center operator would do with a site “and to set an arbitrary standard right now in the regulations doesn’t make sense.”

“I know it came out of a reaction to the Historical Society’s proposal, and that particular lot is very small, but even if you are looking at all nursery schools in the area, 150 feet is a big setback,” she saId. “And for a private home, you couldn’t have a child playing soccer with some friends … It just is too great a distance and it doesn’t make sense.”

Geary, Yanicelli and Mellick all addressed P&Z at the meeting (though the minutes from the Commission’s Feb. 27 meeting said the public hearing on the matter had been closed).

Mellick said at the meeting that he and his client had objected “because we didn’t have any idea of what was being proposed” other than the text amendment itself that Zabetakis had put forward in January. What Geary described to him and Bucciarelli at a subsequent meeting “isn’t necessarily anything that Mr. Bucciarelli would be upset with, the way we discussed it,” Mellick said.

“This is in no way in opposition to anything the Historical Society wants to do or any future application, just to make that clear,” he told P&Z.

Mellick cautioned P&Z against adopting regulations for a “child care center”—as opposed to a nursery school, which is allowable by special permit—because it would allow a child care center in any residential zone.

Though an applicant would still need to obtain a special permit, such facilities do not limit the number of children in them and there’s no real age restriction, since a child is defined as anyone up to age 18, he said.

“So I’m not sure why the Commission would want to add this as a permissible institutional use in residential zones when you do not need to do that for a nursery school,” Mellick said.

P&Z Chairman John Goodwin said the group had been give “more food for thought” and the group continued the matter to a future meeting.

One thought on “‘The Town Has Never Ever Supported the Society’: New Canaan Historical Society Officials Voice Concerns About Proposed Zoning Regulations”