Sometimes when we spot a candidate for our “New Canine-ites” feature—where we fetch a mini-profile of a local dog—it’s all we can do not to drive off the road.

That was the case on a recent afternoon when we spotted Callie Cardon, a massive, brindle English mastiff, walking along Forest Street. 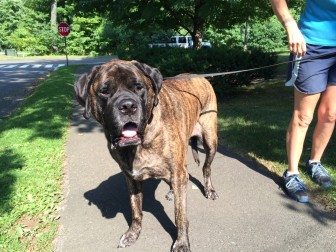 At the other end of the leash was dog-walker Brenda Costigan, who puts Callie’s weight at 208 pounds and age at about five, calls the big girl “as sweet as can be.”

And she’s not big on walking, or eating, Costigan said.

Though even getting Callie around for a short walk in the neighborhood is a triumph, the dog loves to romp at home, Costigan said.