A Weed Street family is adjusting its plan for a backyard shed after next-door neighbors raised concerns about the structure’s visibility from their own property. 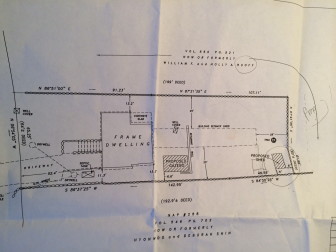 The proposed plan for the shed and pergola—marked here as a “gazebo,” which it is not—for 51 Weed St.

The lot at 51 Weed St. owned by Maria Fernandez Rebosio and Francis Power is long and narrow, with most of the .27-acre property extending behind the family’s two-story Colonial. The Ruoffs’ .89-acre lot next door runs along the northern edge of the Rebosio-Powers’ property line and includes some land behind it, running up to the Metro-North Railroad tracks.

The Ruoff house itself sits further back along the property line—meaning that from their family room, master bedroom, breakfast area and patio, the Ruoffs can turn and look out across the Rebosio-Powers’ back yard.

The Rebosio-Powers’ plan to place a 8-by-12-foot gambrel shed in the southeast corner of their lot—deep into a 25-foot setback designated for the area—would spoil the family’s view, Holly Ruoff said at the Aug. 4 meeting of the Zoning Board of Appeals. 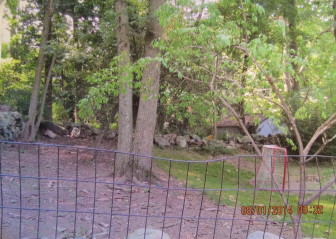 As originally proposed, the shed would be located a bit behind where the goal is pictured here, looking into the property at 51 Weed St. from number 59. Contributed

“Allowing the setbacks to do what they are supposed to do is what we would like to happen, because they will very significantly mitigate the impact of that shed on all the views from our house,” Ruoff said at the meeting, held in the Douglas Room of Lapham Community Center.

“That is this area in the back of our house and that’s where we live,” she continued, her husband and son in attendance. “The breakfast room and [patio] outdoors. Even though our property is very large, that is where we spend our time, so we [would] see that shed from all angles, from the bedroom, from the family room, every which way and we would very much appreciate having the setbacks respected so that that impact is minimized.”

The ZBA, chaired by Carroll Yanicelli, ultimately approved the Rebosio-Powers’ plan for the shed, though respecting the backyard setback—in other words, requiring that it be no closer than 25 feet to the eastern property line—and with a condition that trees at least six feet tall be planted so as to screen the shed from the Ruoffs. 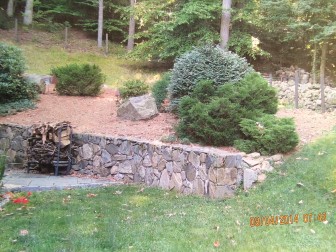 This is the Ruoff’s backyard patio area at 59 Weed St. Contributed

Maria Fernandez Rebosio agreed to the plan, though she said she was concerned about eating into a flat area of the family’s backyard where her two boys play. Little of the backyard, already tiered and separated by a retaining wall because of its topography, is flat.

“We moved to this house because we never had a back yard before,” Fernandez Rebosio said. “This is the first time we had a back yard and if I need to get rid of the shed, I will kill the shed in favor of them [the two boys] having a play space.”

In a 5-0 vote, the board granted the Rebosio-Powers’ application for variances for the shed—on the above-listed conditions—as well as their request to put up a 14-by-16-foot pergola directly beside the house.