Inspiration, strength, perseverance, personal growth, and confidence are not words many young girls are used to hearing every day. 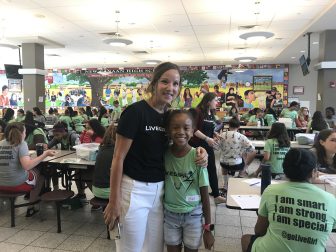 Yet at Camp LiveGirl, where 5th- through 12th-graders gather together with adult mentors, the girls learn what it truly means to have their “power.”

The organization that runs the camp, LiveGirl, was founded in 2015 by New Canaan resident Sheri West after her own family’s transformative experience with the Fresh Air Fund.

Launched with a group of 80 hosting girls for a week in the summer, Camp LiveGirl has grown into providing a group of 140 girls from all over Fairfield County that attracts volunteer counselors and high-profile speakers and mentors that believe in empowering young women. LiveGirl has also launched year-round efforts dedicated to provide development and mentorship opportunities for girls.

In addition to hearing from speakers, girls are organized into teams of eight to nine girls and matched with high school volunteer leaders to make personal connections and guide them through the sports and musical theatre options offered in the afternoon. 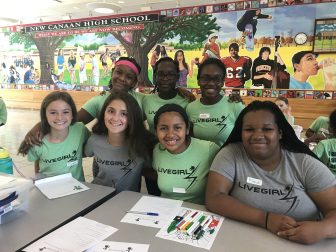 Counselors with their team of campers work on crafts and worksheets. Credit: Catherine Gorey.

This approach is designed to maximize opportunity for the campers, according to West.

“All of this is intended to teach these girls that they have super powers inside of themselves,” West said. “The power they need to change the world is already inside.”

The design seems to be effective, with both campers and counselors embracing West’s teachings of empowerment.

Amelia Wyckoff, 18, has been working with the organization for a more than  a year, first as a summer counselor and then as part of the high school fellows program, says the organization has allowed her to pursue her passions of social justice and gender equality.

“I heard about LiveGirl and all that it was doing, and I just knew I had to be involved,” Wyckoff said. 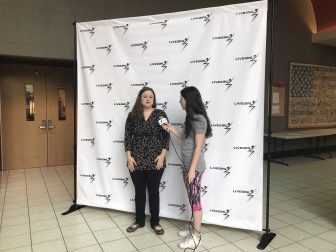 As part of the fellows program with a focus on advocacy, Wyckoff played a key role in the organization’s round year programming like after school workshops and leadership summits, coordinating closely with state Rep. Caroline Simmons (D-144th).

Wyckoff also worked to start a youth advisory board made up entirely of high school students.

“The hope of that is really to not only allow the teenage voice to be more heard and to have the kids have a direct impact on the programming, but to also teach leadership skills to the high school mentors,” she said.

Wyckoff said she identifies with the mission of LiveGirl, citing the “incredible” differences she sees in all the girls by the end of the one week camp.

“They’ve come out of their shell,” Wyckoff said. “They feel more empowered to share their opinions they become so much more confident and comfortable in themselves in every way.”

“It’s really amazing to see the changes that they all go through,” Wyckoff continued. “It’s been a great experience, it’s really empowering.” 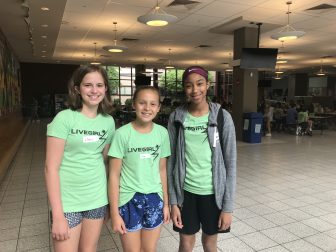 For the campers it gives the girls a unique opportunity to be surrounded by so many forms of boundless encouragement and support from fellow women and girls.

Mateja Moyer from Trumbull, is one of the older participants in the camp, has been coming back each summer for three years. She says the camp and speakers have taught her to cast aside other people’s doubts when pursuing her personal goals.

“It helps me to believe in myself, and not care as much about what other people think,” Moyer said.

Maggie Murphy of New Canaan, 12, has only been at the camp for a few days but said she has already experienced a difference.

“I like that we get the opportunity to be ourselves and just be confident,” Murphy said.

Libby Holland of Stamford, a participant in the camp for two years, said the camp’s speakers have shown her “that girls really can do all this stuff.”

It has also helped her to realize the gender imbalance that is too often seen in our society, Holland said.

“I think it puts things in perspective that things have to change, things can be changed, and the change starts with all of us here,” she said.