The idea for Camp LiveGirl—that’s a short ‘i’ in ‘Live,’ a verb—came to the West family over the winter. 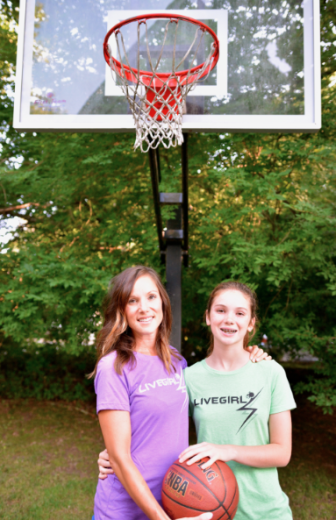 Transformed after hosting a Fresh Air Fund girl from Queens, N.Y. last summer, mom Sheri and dad Brian gathered the kids (Conor, then an 8th-grader, Olivia, 6th and Donovan, 2nd) to discuss how else they could make a difference, now that their Fresh Air Fund guest, Janiyia Rodriguez, had aged out of the program.

“We all felt very grateful, but we were cognizant that there are plenty of Janiyias out there, and as a family, we brainstormed about some way we could touch more lives,” Sheri recalled on a recent morning.

What was born at that family meeting will materialize next Monday, as 30 middle school-aged girls from Bridgeport and Stamford join 20 similarly aged New Canaan girls for a unique, weeklong camp designed to empower, educate and engage its participants through multiple sports, identity- and confidence-building exercises, camaraderie, healthy living instruction and inspiring and informative speakers.

Dubbed ‘LiveGirl’ because the Wests call their daughter ‘Liv’ for short, the camp is not only a deeply personal effort led by Sheri West that follows months of planning—it also results from a coordinated effort across a large swath of the New Canaan community. 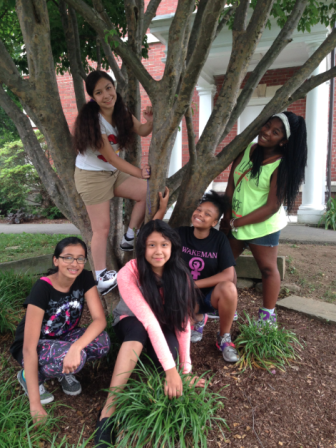 The camp is focusing on girls specifically, she said, because “boys, in my humble opinion, have more access to successful mentors and role models in the world, and more access to sports which can teach resilience, and so on. We’re focused on this age range because, as a parent, that is the abyss. It’s when kids face increased demands, peer pressure. This is just a critical time in their lives and I feel that it’s important to provide a connection. You can put them on a positive path. If they miss out, they can spiral downwards from there.”

The fees for the participating girls from Bridgeport (Trumbull Gardens housing complex and Wakeman Boys & Girls Club) and Stamford (from that city’s Boys & Girls Club), who will be bused in daily from those cities, are offset by dues from New Canaan families with girls in Camp LiveGirl. Each day of camp starts with a sports- or healthy outdoor living-related activity, and afternoons include leadership sessions and special speakers. 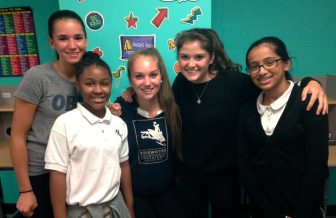 Sheri, who has met weekly with the out-of-town girls (“I want those Bridgeport girls to have a connection so that when they get on the bus in July, they have a personal connection”), also recruited what she’s calling an “exceptional group of high school students,” eight rising NCHS juniors and seniors who will work as camp staff as part of an unpaid internship for the week.

One of those “team leaders,” 17-year-old rising NCHS senior Abigail Farley, said she views the camp as a rare opportunity to connect with girls from different backgrounds.

“I think especially growing up in New Canaan, you don’t necessarily get to meet people from other towns, especially with such different backgrounds,” Farley said. “It’s also not just a sports camp, but they’re bringing in these amazing women and role models, so that was my favorite part.”

Those women role models include senior business executives such as a senior vice president of investor relations from Nielsen, a professor in the Child Study Center at Yale School of Medicine, president of a multi-service construction company headquartered in New York City and entertainment executive who serves as chair of the Hispanic Latino Advisory Council and as a national board member of Girl Scouts of America.

Laura Magnotta, associate director of development at Wakeman Boys & Girls Club, said the 12 participating girls there are “excited and invigorated” about the camp, which is “all they are talking about.”

Though Wakeman is a full-day camp, its clients don’t’ go on field trips, Magnotta said, and in fact some of the girls participating from Bridgeport didn’t know how to pronounce ‘New Canaan’ when first introduced to Camp LiveGirl.

More than getting out of their home city, she said, “the fact that they are going to be able to be in a camp with only girls really excites a lot of them.”

“They have a gender perspective where they love being empowered and in charge,” Magnotta said.

She relayed an anecdote about one participating girl who had been at an all-girls function in the spring. When one of the adult women at the function asked a group what they wanted to do when they grew up, this particular girl said she wanted to be a basketball player.

“And I thought I the back of my head: ‘I have never seen this girl play basketball.’ We have a lot of leagues where kids shoot hoops but she may not get on the court because most of the time, the guys are on the court. And all of the sudden she’s so excited to play basketball with LiveGirl. All these things come out that I never would have known.”

Wakeman itself lacks the resources that normally would be needed to send its campers to something like LiveGirl “and it is really an honor that Sheri West looked at us and said, ‘You are a valuable organization with valuable children that deserves to go to this.’ Many of these girls are not necessarily athletes. Most of them have never played a sport besides gym class, so this is an opportunity to learn how to be a good teammate rather than an actual sport, and how to be leaders in their own right.”

Egan, a longtime girls track and cross-country coach and a father of three girls himself—two NCHS grads who have gone on to collegiate swimming, and a rising senior—said the age range on which Camp LiveGirl is focused is “really the right time” for a leadership camp that touches on “what opportunities are out there.”

“I know there is a positive self-confidence piece that is included in the day’s activities and I think for both girls coming from Bridgeport and Stamford, and from New Canaan, that is a really important message to get when you’re at a point in your lives when you’re starting to figure things out,” he said.

Asked about how she tailored her well-established sessions for this group of middle school girls, Domino said that for girls, “one of the biggest things is body image.”

“There is a lot about drama and a lot about natural hormones spiking, so they are sometimes feeling great about themselves and their interpersonal relations, and other times they question who they are, so what we really focus on is by understanding and by feeling strong and smart and empowered from within, that helps them to actually build their relationships with others from a point of positivity, of strength, rather than one of drama or cattiness or jealousy or other types of things. We really focus on each kid’s unique assets or attributes and end up with great group dynamics.”

Sheri said that future plans include building on this year’s camp through a leadership series that runs through the school year, and drives traffic to the LiveGirl website—an interactive destination for middle-school aged girls that also includes a resources section.

Members of the West family have followed through in unique ways since conceiving of Camp LiveGirl: Olivia (‘Liv’) has been a one-person focus group for everything from camp offerings to individual communications, Conor built and manages the website, and the company where Brian works, Nielsen, is not only providing a speaker but also backpacks and T-shirts.

For Sheri—a New Canaan resident for eight years who grew up in a central Michigan farming community, daughter of a schoolteacher and General Motors union worker—part of what each participating girl in the camp should take away is something that she reminds her own kids about nightly: That they’re “smart, strong and special.”

“I am excited to see where LiveGirl goes and committed to following through, and to making a difference. I feel so blessed in the world and that the right thing to do is to pay it forward.”

2 thoughts on “‘Smart, Strong and Special’: New Canaan Camp To Bring Together Girls from Neighboring Communities”