Introduced to Fresh Air Fund by her grandmother three years ago, New York City’s Janiyia Rodriguez says her favorite part of the nonprofit’s signature program so far has been playing games with her host family, the Wests of New Canaan, and spending time in the water.

“I like the Adventure Park in Bridgeport which is basically a zip-line with obstacles in it, and it’s awesome,” Janiyia said on a bright and sunny afternoon this week at the Country Club of New Canaan pool, host mom Sheri West and West’s daughter Olivia nearby.

Ms. West said: “Ever since she’s been here she’s spent almost all of her time in the water, so we gave her the nickname of ‘little fish.’ ”

The Wests are one of 17 New Canaan families hosting a Fresh Air Fund child this summer, said town resident Teri Reed. A nonprofit agency that since its founding in 1877 has provided summer experience to more than 1.8 New York City children from low-income communities, Fresh Air Fund through a special program places 6- to 12-year-old inner-city children into the homes of volunteer host families for one- or two-week visits in the summer.

Among the 17 local families participating, the Wests are one of five first-time hosts—others in town have welcomed the same child into their home for repeat visits, including one for 10 years, Reed said. 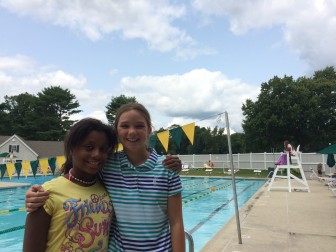 Ms. West said that Janiyia and her family have participated in plenty of fun summer activities.

“We’ve been bike riding, camping in our backyard, watching movies, and we actually went to see ‘Charlotte’s Web‘ which was fun because Janiyia thinks she might want to be an actress when she grows up, so that was a fun experience,” Ms. West said.

Ms. West also mentioned how Janiyia and her daughter have bonded over the two weeks they have been together.

“Janiyia and Olivia are the same age and they’ve really hit it off famously,” she said. “They’re calling each other besties and it’s been like a two week sleepover for them because they stay up every night giggling and laughing.”

Each girl has kept a journal of her experiences this summer, according to Ms. West.

“I’ve also been having Janiyia keep a journal every night so when she goes home she can share it with her grandma and her mom,” Ms. West said.

On a recent trip to Art and Soul on Main Street, the two girls each painted pottery blanks of dogs.

“We both painted the same type of puppies,” Olivia said.

Ms. West added: “But now, after Janiyia returns home, they’ll both have the Siamese pup so that they can think of each other.”

Ms. West said that hosting Janiyia has been a great experience that works both ways.

“I think that forever I’ll think about life differently because of Janiyia and our time with her, because she has made me appreciate my blessings more and I’m very thankful for that,” she said.

Here’s a promotional published this year by Fresh Air Fund:

Host a Child through The Fresh Air Fund