A motorist traveling up Main Street into town on Wednesday night collided with another vehicle at the Cherry Street intersection, officials said. 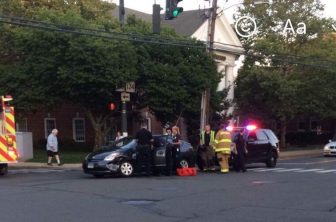 A Toyota Prius that appears to have run a light at Cherry and Main Streets in New Canaan collided with another vehicle coming through the intersection on Aug. 23, 2017. Credit: Matt Walsh

New Canaan Police on scene said a woman operating a black Toyota Prius traveling northbound on Main Street appeared to have run a red light at the busy intersection, colliding with a Volkswagen operated by a man and attempting to pass through it.

The New Canaan Fire Department and New Canaan Volunteer Ambulance Corps also responded. The driver of the Prius was being treated on the scene by EMTs.

No one was seriously injured, officials said.

It isn’t clear whether she will be charged.

—Matt Walsh contributed to this report