Officials put down a baby mink last week after a car on Wahackme Road ran over the animal, breaking its back.

The call came in at 8:30 a.m. on Aug. 7 as an injured ferret on the corner of Wahackme at Bayberry Road, but turned out to be a mink—a carnivorous species that exists in New Canaan though it is not often seen, said Animal Control Officer Maryann Kleinschmitt. 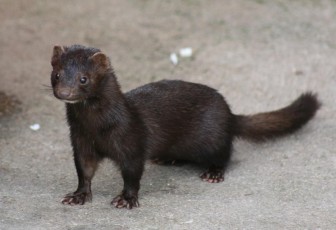 “I had never seen one [before],” Kleinschmitt said. “I know that we have fisher cats and weasels out there, but I’ve never seen a mink. They’re usually out at night, though since we have a baby, that does tell us they’re here. There is a lot of protected territory up around Irwin Park, so I’m sure we have a lot of different critters there.”

When hit by a car, a reflex kicks in with a mink where they jump up high into the air “which is why you never see a crushed mink” in the road, Kleinschmitt said.

In this case, Kleinschmitt said she picked up the animal to see if it could be transported and rehabilitated, but “it could not use its back legs and its back was broken.”