New Canaan Police Officer Tom Callinan steered an unmarked Chevy Tahoe off of Farm Road and into the South School lot on a recent weekday morning, circled and swung back around, parking the SUV so that he could see clear across the intersection, the access road into New Canaan High School and Waveny beyond spread out before him. 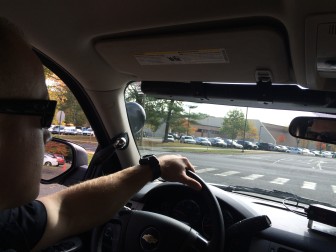 Not long after—at exactly 11:58 a.m.—a black Jeep Laredo 4×4 brazenly ran the stop sign (“He didn’t even pump the brakes”) and swung left into the NCHS lot, prompting Callinan to pull forward and pull over the 17-year-old motorist.

This time, the teen—whom Callinan said was “extremely respectful” and apologized straightaway for the moving violation—received a written warning that will go into his driving record in case it happens again.

During the same late-morning enforcement shift, Callinan from the same vantage point pulled over a woman traveling along Farm who had dropped her hand the moment she spotted him watching (“She just dropped her phone,” he said as he pulled out and hit the flashers)—another day in the life of a New Canaan police officer addressing what the department’s chief has called “a new traffic safety epidemic” in town: distracted driving. 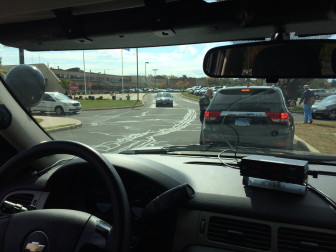 NCPD Officer Tom Callinan pulls over a 17-year-old motorist returning to the high school around noon on a recent weekday. The young motorist, who (legally) had a passenger with him, ran the stop sign at the entrance to the high school. We’ve blurred out the license plate here. The driver received a written warning. Credit: Michael Dinan

The proliferation of cellphones and nonstop, borderline obsessive use of the mobile devices among young people especially (who have little driving experience to start) has created a new hazard on New Canaan roads that officers such as Callinan combat daily.

During a ride-along with Callinan—a Bronx native who left a career in finance to pursue police work and is the nephew of a NYPD cop—NewCanaanite.com got a feel for what distracted driving enforcement looks like from the “other” side.

While people holding a phone up to their ears may be the most obvious example of yapping illegally, and dangerously, on a cellphone, other indicators for police include holding the wheel with one hand (the other texting away, or what have you), quickly putting down a hand or arm, seeing whether a motorists mouth is moving though there are no other passengers in the car (often an indication that someone is on speakerphone) or just plain bad driving, Callinan said: For example, distracted drivers often come to a stop sign and fail to look either way before proceeding, because they’re so focused on their conversation that the physical act of driving is secondary.

Often, Callinan said, he learns during stops that motorists think just because they’re not talking on a cellphone that they are not breaking the law—they may be changing the song on an iPhone, for example, or using its GPS capabilities.

“They think just because they’re not engaged in a phone call, it’s not a violation, but it still is engaging with the use of a mobile device while operating a motor vehicle,” he explained.

During the stop on the high school road, and the separate stop of the woman who dropped her hand, several passing motorists and pedestrians peeked to see what was going on—hopefully a bulletin to people that police are enforcing distracted driving laws, Callinan said, regardless of whether the stop they’re witnessing leads to an infraction summons.

“It’s a deterrent factor,” Callinan said. “Maybe next time they do the right thing. I’m doing my job if I can just create a little safer roadway for everybody. That’s the goal.”

It’s a worthwhile one: Officials estimate that 3,328 lives have been lost to distracted driving.

Police Chief Leon Krolikowski feels strongly enough about the problem that he set up a Halloween witch outside the department who had flown into a tree with a “don’t text and fly” message on her.

“Distracted driving is the most significant threat to traffic safety we have seen in many years. Distracted driving has become a trend with deadly, real consequences,” he said. “The entire New Canaan community must work together on making our roads safer. To tackle this ever-increasing problem, our department is focusing on ways to change the behavior of drivers through education, enforcement, and educating Connecticut Legislators that they must enhance the penalties for distracted driving—the same tactics that have curbed drinking and driving and increased seat belt use.”

While that’s happening, Krolikowski said he’s encouraging all New Canaan parents to print out and sign this Teen-Parent Safe Driver Agreement, which is connected to passenger restrictions.

For the first six months after obtaining a driver’s license, a new driver may only have an instructor, parent or legal guardian in the car. For the second six months, a new driver can add immediately family members. Until a new driver is 18, he or she may not drive between 11 p.m. and 5 a.m. unless it’s for work, school, medical necessity or religious activity, the law says. All passengers of a motorist younger than 18 must wear a seatbelt in the car, front and back. Until a driver turns 18, he or she may not use cell phones (even if hands-free) or other mobile electronic devices while driving. This includes any hand-held computers or other device with a video display.

The passenger and curfew restrictions do not apply to: