Though the spending plan for the office of New Canaan’s highest elected official calls for an overall 4.5% reduction, items within it such as the first selectman’s salary could be adjusted when the budget comes to the Board of Finance, officials said this week. 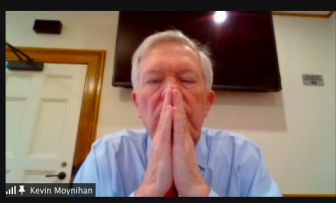 First Selectman Kevin Moynihan at the Jan. 26, 2021 Board of Selectmen meeting. Zoom screenshot

First Selectman Kevin Moynihan’s current salary is $147,000, according to the approved budget for this fiscal year, while the two selectmen together are paid a stipend totaling about $16,000.

“The Board of Finance will be considering compensation,” CFO Lunda Asmani said during a budget hearing Tuesday.

“This is reviewed, typically, every two years, I believe, so they will be looking at first selectman and the selectmen. That will be discussed at the Board of Finance level, and whatever is proposed at that point we’ll make that adjustment to that budget.”

The Board of Finance is scheduled to take up the budget Feb. 9 and to vote on it March 4, sending the proposed spending plan for next fiscal year to the Town Council for review.

Here’s a look at the salaries of first selectmen in similarly sized lower Fairfield County towns:

Overall, compensation for the office of the first selectman—Moynihan, Murphy, an executive secretary and HR generalist—would come to $410,854, under the draft budget. The selectmen budget includes $25,000 labeled “project coordinator,” which appears to be new.

The reason for the overall decline in the selectmen budget is a reduction of more than $20,000 in salary for the first selectman’s administrative officer, according to a draft budget.

In reviewing the overall decrease, Asmani said, “Among the drivers, obviously we have had a change in personnel in the town administrator and so there is a salary differential that’s accounting for that, and then we also had a slight reduction in meals and entertainment.”

He referred to Tucker Murphy’s proposed salary of $130,734, according to a draft staffing table obtained by NewCanaanite.com through a public records request. Murphy took over the job last summer. Her predecessor in the staff position earned a base salary of about $152,000, according to the budget approved last spring.

Moynihan during the meeting addressed Asmani’s comment regarding meals and entertainment.

“The administrative officer put together this budget,” Moynihan said, referring to Murphy. “I really didn’t look at it. And then when you [Asmani] highlighted meals and entertainment, I’d like to point out that that’s a budget that I do not spend. I think we have employee breakfasts out of that, and I think holiday events. But I don’t think since I’ve been first selectman that I’ve had a personal meal or a travel expense. And so I kind of wasn’t aware we even had that line item. I don’t have a credit card like Lunda does.”

In response, Asmani said, “I don’t either.”

Murphy also said, “I don’t either.”

The Town Council is scheduled to vote March 31 on the fiscal year 2022 budget. The legislative body can make reductions prior to a final vote.