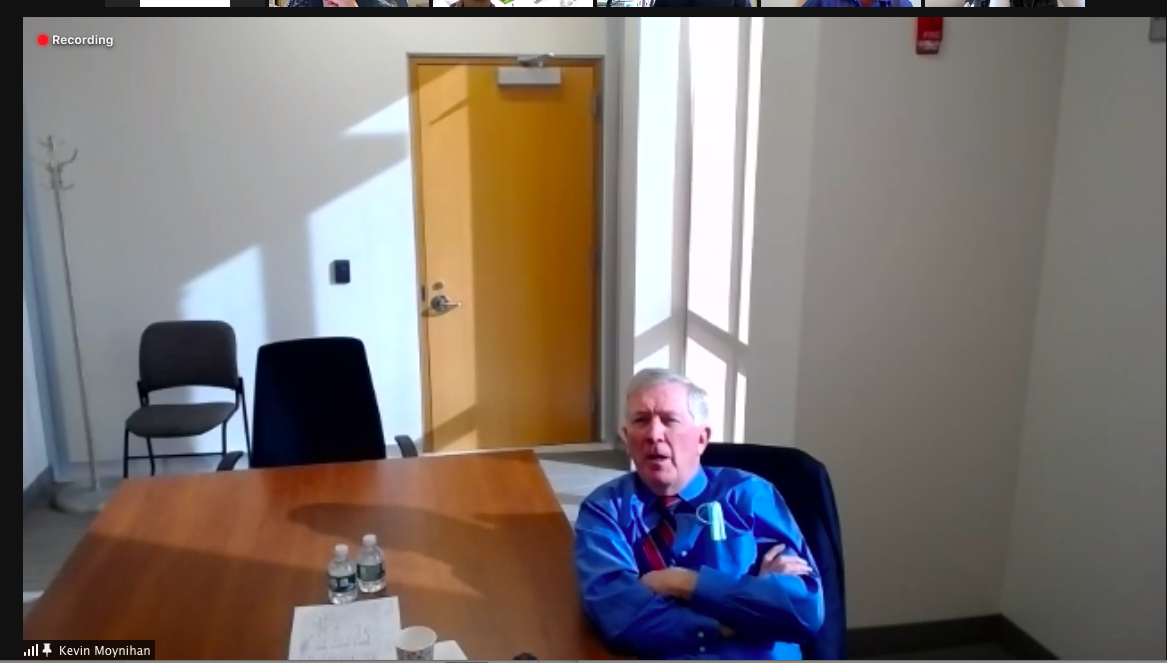 First Selectman Kevin Moynihan during the Jan. 19, 2021 Board of Selectmen meeting. Zoom screenshot

New Canaan’s highest-elected official on Tuesday denied a report made this month by a Parking Commissioner that a fellow member of the volunteer body had been blindsided by the town’s decision to not reappoint her.

During the group’s Jan. 7 meeting, Commissioner Peter Ogilvie said he was “disappointed in the Parking Commission and town government for not having any conversations whatsoever with Pam Crum.”

“I have had a discussion with Pam and she is quite clear-minded and very definitive that she was never told,” Ogilvie said during the Parking Commission meeting.

First Selectman Kevin Moynihan denied that characterization during Tuesday’s regular meeting of the Board of Selectmen.

“Michael [Dinan] reported last week that I made an appointment to the Parking Commission without talking to a member who was not going to be reappointed,” Moynihan said during Tuesday’s meeting, held via videoconference. “That was untrue.”

Neither Crum nor Moynihan attended the Parking Commission meeting where Ogilvie made the assertions. The only other member of the Commission to address the matter during the meeting was Chair Keith Richey, who said in part, “I think he and Pam had had a discussion. It may not have been definitive, let’s just say. And she may have been left hanging in the wind. I agree that’s probably true. But, you know, let’s face it, that happens. But she knew her term was ending on December the first.”

Moynihan on Tuesday criticized this news outlet and reporter, saying (audio embedded below), “Michael [Dinan] reported last week that I made an appointment to the Parking Commission without talking to a member who was not going to be reappointed. That was untrue. And Michael knew it was untrue. He was told it was untrue. So I am getting more and more concerned, Michael, about your reporting untruths. It’s happened several times in the past several weeks. I’m a public figure and you can say whatever you want about me, but you can’t publish untruths about me, so that was disturbing to me and I hope I don’t see that further.”

It wasn’t clear what Moynihan referred to. 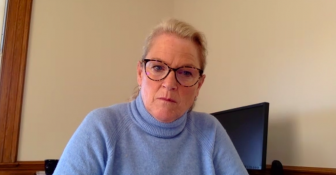 He’s appeared in some of the most-read stories in recent weeks, including the Parking Commission meeting regarding Crum, Tucker Murphy’s complaint regarding a local business, potential use of a town-owned residence in Kiwanis Park as an Animal Control shelter, legal bills regarding God’s Acre and the future of The Playhouse on Elm Street.

Moynihan made his remarks during a portion of the meeting dedicated to the selectmen’s comments on general matters before the town. After he did so, NewCanaanite.com posted a message in the live Zoom window, saying, “Kevin we can only report what is said at public meetings, your attack here is baseless.” Moynihan did not respond.

Tuesday’s meeting marked the first time that Moynihan has criticized news coverage during a selectmen meeting. He used to do so during bi-monthly press briefings. He canceled those in August. Moynihan’s version of events has been at odds with that of town officials prior to Ogilvie’s characterization. In June, then-Emergency Management Director Mike Handler said Moynihan lied about the circumstances of his dismissal from the role.

Here’s an audio recording from this portion of Tuesday’s selectmen meeting: