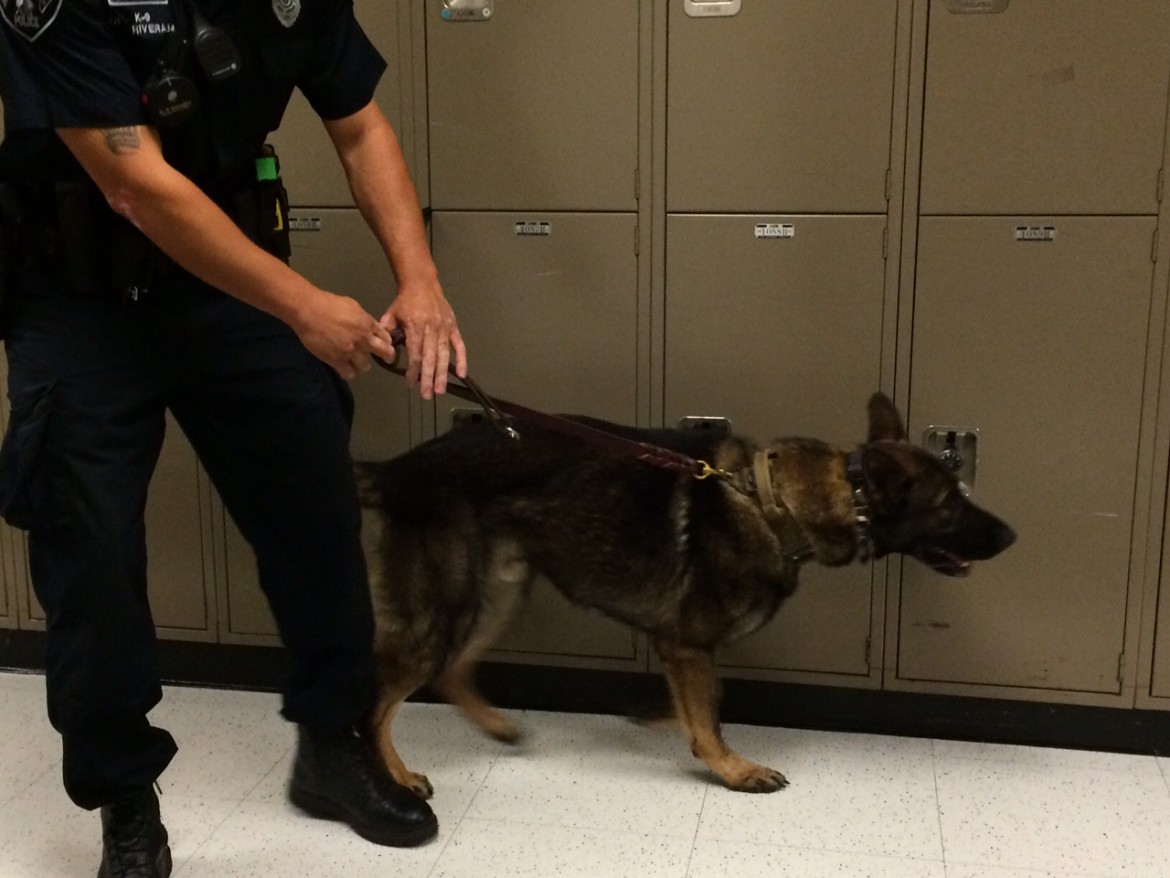 The Board of Education may adopt a policy that would see drug-sniffing dogs allowed in public schools so long as students are not present during searches or criminalized as a result of them, the elected body’s chairman said Wednesday.

Board members have talked about the issue in the last two weeks though they’re “somewhat concerned over because they don’t want dogs necessarily coming into schools and causing a problem as it relates to student stress or health,” according to Brendan Hayes.

“So we are thinking about that carefully but that may be something that the Board moves forward on, so that we have a policy that governs dog searches which would never occur when kids are actually walking around,” he said during a Candidates Debate, held at Town Hall. “The dogs cannot come into contact with the kids. So we would do that very carefully if we chose to do it.”

The Democrat later added, “I met with Chief [Leon] Krolikowski and the superintendent a number of months ago, talking about this specific issue of we will do nothing if it results in kids being criminalized when they are in school. We will absolutely not do that. I don’t believe the Board would ever support that and I’m sure no one here would support that.”

The comments came in response to a question about Board of Ed policies that would address teen substance abuse on school grounds. Moderated by Greenwich’s Jara Burnett and co-sponsored by the League of Women Voters of New Canaan, which organizes the annual event, as well as Channel 79, the New Canaan Advertiser and NewCanaanite.com, the 2.5-hour debate drew a standing-room-only crowd.

Five candidates are running for four seats on the school board that are up for election this year. Three of them currently are held by Republicans, one by a Democrat (Hayes). Republican Julie Mackle Reeves is seeking to retain her seat, while Democrat Steve Eno and GOPers Carl Gardiner and Bob Naughton are also running.

The New Canaan Police Department’s push to allow its drug-sniffing dog, Apollo, to search New Canaan High School followed the observation made by a Town Councilman four years ago that several young people in town were dying of overdoses. After that, Apollo searched NCHS as part of a training exercise prior to the start of school, and the following month, the Police Commission said that authorities should be able to conduct real searches.

A conversation opened between police and district officials, though the effort appeared to lose steam until the arrest in April 2018 of a New Canaan High School coach after authorities found him to be in possession of 20 bags of heroin. (The arrested man’s coaching permit was found to have expired, and a subsequent Board of Ed meeting, the NCHS athletic director outlined new steps the district is taking with respect to ensuring proper certification as well as some common difficulties surrounding the certification process.) After that happened, both police officials and residents urged the district to allow the K-9 searches. Yet after Superintendent of Schools Dr. Bryan Luizzi described such a policy as “worthwhile” during a July 2018 meeting, the Board opted not to vote on the matter, saying it needed more information and time to reflect on what would follow the measure.

Mackle Reeves said during the debate that she was “not a proponent of the drug-sniffing dogs in schools, for the reasons of a child getting caught and it potentially being a devastating experience for them for their lives.”

“So I think we need to still think about that,” she said. “When we talked about it in the Board of Ed, it has always been in the context of when the kids are not in school. So it’s not the kind of thing where if your child has a vaping ‘cartridge’ or whatever it’s called that they will not be caught with it then. So I’m not sure the dogs in this case would play a role anyway. But I think the health education of our kids is the most important.”

Her position contrasted sharply with Naughton’s. He called the idea of a drug-sniffing K-9 in schools “a great deterrent” as long as “you figure out a process between the police and the school.”

“But having those dogs come through would be a huge deterrent, at least, if nothing else, to keep it out of the schools,” he said, adding that counseling and programs on substance abuse would be helpful.

Naughton later said, “I think everybody is very invested in health and wellness and I’m sure lots of drug education has happened with health over the years. The thing with drug-sniffing dogs at the high school is what that does is it’s a deterrent is for kids who are getting into bigger, worse drugs and you can work it out with the police so that it does not become a permanent record. So I think that’s the way to go. You may save somebody’s life later on because of it.”

His last comment drew some applause from the approximately 120 debate attendees.

Eno called the question of whether to introduce a drug-sniffing K-9 at the schools “a tough one.”

“My personal belief is that we should have K-9 search in the schools,” he said. “I know that is not everyone’s belief and that’s OK, but what I think is really important is the Board of Ed and administration needs to move this as quick as they can to closure. Because it’s been out there for at least a year and it just doesn’t seem to be moving as quickly as I would like. And I know there is also a fear around criminal records. But there are also things that New Canaan could take advantage of like Norwalk’s Juvenile Review Board, which is specifically designed for things like this for teens caught with drug possession and every town, I believe, around here except New Canaan sends kids to the Juvenile Review Board. Once they go to the Juvenile Review Board, there is no court record, no criminal record, nothing, so I think that’s something we should look at in connection with the canine search dogs.”

Gardiner voiced concerns about what would follow for a student who is found to be in possession of drugs.

“What does that do to that individual’s life?” he said. “So I guess generally I would prefer to approach this as a healthcare issue rather than a law enforcement issue.”

Gardiner said he worried about kids who have grown up in a post-9/11 world where “there is just so much security around that we didn’t have, and I do wonder how it impacts them and their knowledge of it.”

One thought on “Chairman: Board of Ed Moving Forward on Limited Use of Drug-Sniffing Dogs in Schools”