We caught sight of a Borzoi, or Russian wolfhound, as the leashed animal and its owner walked up Elm Street near Ralph Lauren.

Gregory Melnitsky, a Moscow native who speaks excellent English with a thick accent, has had Charles (or “Sir Charles,” Melnitsky said) since puppyhood. Charles hails from Nebraska originally, Melnitsky said. 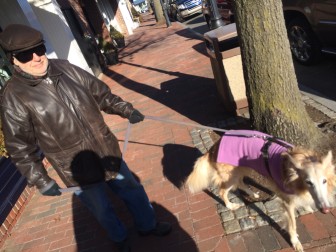 A PhD who immigrated to the United States 25 years ago, Melnitsky said he’s lived in Connecticut for his entire time here. He’d lived in Westport while running a construction mixing materials laboratory for a Fairfield-based company, and moved to New Canaan three years ago.

We mostly talked about Sir Charles, though Melnitsky also noted that his daughter, a town resident, works for GE Capital in Stamford, and that his son is a doctor.

“I enjoy living here,” Melnitsky said of New Canaan. So does Charles. Melnitsky said his daughter purposely acquired a home on 1.5 acres in New Canaan so that the Borzoi could stretch his legs.

“He’s a racing dog. He has to run,” Melnitsky said. 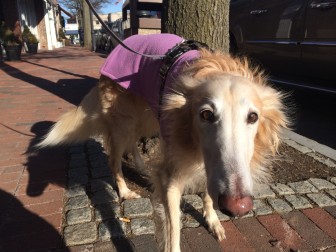 Asked what Charles likes to do in town, he said: “To walk, to run and to communicate with dogs in two parks, in Irwin Park and in Mead Park by the pond. And in the evening here at Elm Street, because he likes downtown activity, restaurants, people, cars, lights. He enjoys this.”

He also enjoys mealtime, or should.

“I cook for him,” Melnitsky said when asked what Charles eats. “I cook for him chicken drumstick, beef liver and lamb. He is crazy about lamb. He likes lamb.”

Before saying goodbye to Melnitsky and Charles in front of New Canaan Playhouse (we walked slowly and Charles had plenty of sniffing to do along that stretch of Elm Street), I asked Melnitsky what he thought about the Sochi Olympics.

He said he “wasn’t crazy” about the games, “And I don’t like to do any PR for Putin.”