“… honor, pleasure, reason, and every virtue we choose indeed for themselves … but we choose them also for the sake of happiness, judging that through them we shall be happy. Happiness, on the other hand, no one chooses for the sake of these, nor, in general, for anything other than itself.” —from Book 1.7 of Aristotle’s “Nicomachean Ethics,” translated by Sir David Ross 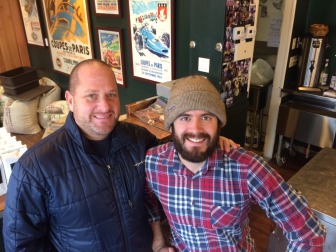 New Canaan’s Matt Konspore and Will Bruno, who own “Choose To Be Happy” with Mike Shullman. Credit: Michael Dinan

In one way, the rapid rise of the phrase “Choose To Be Happy”—the chord it strikes and, if retail experts are right, its potent marketability—should perhaps come as no surprise to New Canaan residents Matt Konspore and Mike Shullman.

On a basic level, the longtime friends became its first adherents and converts—its first “customers.” 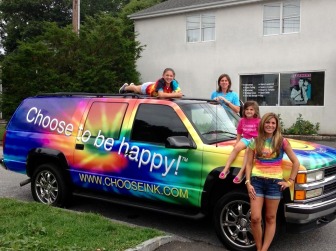 Matt Konspore’s family with the “Choose To Be Happy” automobile. Contributed

A chance remark uttered by a loved one in need nearly two years ago, those four words and the powerful, empowering message they carry took root for the men, and quickly became a kind of byword between Konspore and Shullman at a time when each, in his own way, had been searching for some inspiration.

The friends began texting “Choose To Be Happy” to each other and then, on a lark, Konspore ordered up about 10 T-shirts with the phrase printed on the front, had his wife and kids don them and surprised Shullman at his home—one for every member of each family. 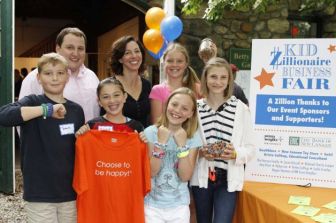 Choose To Be Happy T-shirts and apparel. Contributed

Immediately, anyone who saw Konspore wearing the T-shirt—say, at Zumbach’s Gourmet Coffee on Pine Street, a regular hangout—had a strong, positive reaction, he recalled.

“Everybody was saying ‘What a great shirt,’ and every person that came in said, ‘That is my mantra, where can I buy it?’ ” Konspore recalled Wednesday afternoon from a table at the popular coffee shop.

So Konspore in the spring of 2013 had a few hundred made up, and sold out of them quickly from the back of his car, and Shullman experienced the same phenomenon with the “Choose To Be Happy”-branded bracelets he’d ordered. 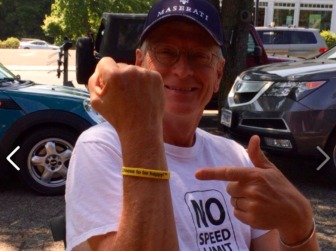 Peter “The Bushman” Bush, longtime FM 95.9 The Fox DJ, with his Choose To Be Happy bracelet. Contributed

Now, following more than 18 months that have seen Konspore, Shullman and friend Will Bruno—a 2010 New Canaan High School graduate now working toward a bachelor’s degree in business administration from the University of Connecticut at Stamford, known to many as Zumbach’s genial manager—sell “Choose To Be Happy” T-shirts and other merchandise locally and in New York City, launch a Facebook page (which now counts 5,000-plus followers), deck out a car with the phrase and trademark it, the local feel-good effort is poised for distribution in an even larger market. 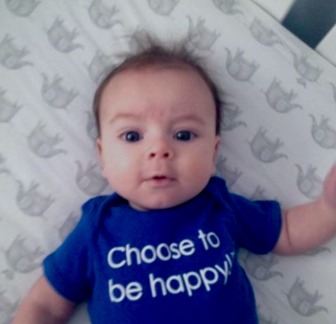 A small-size Choose To Be Happy shirt. Contributed

The trio recently inked an agreement with Manhattan-based retail consulting firm The Grayson Company to bring “Choose To Be Happy”—the phrase, merchandise and message—to prospective retailers and wholesalers in a campaign which, according to Grayson Managing Director Steve Goldberg, has “significant” market potential.

“We see it as a multi-category type of brand that will start in apparel and accessories but has the potential to grow over many different categories,” Goldberg said. 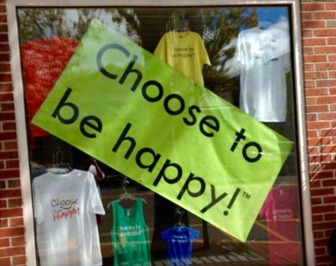 Choose To Be Happy occupied the pop-up store on Main Street in August 2013. Contributed

“We [Grayson executives] have an educated feel for trends and products and things that resonate, and when we were approached with this idea, I think first and foremost, the idea resonated,” Goldberg said. “Most importantly, it is an idea that has an emotion and a passion attached to it. So on a visceral and emotional level, that is what struck us first, that this can tap into a growing sentiment in this country for inspirational product and there is a lot of inspirational product, whether it be in jewelry or other categories, that is really exploding across the country. I think some of it is because people are looking for uplifting messages. And at the community level, there are benchmark companies out there that have tapped into other things that evoke sentiment and build very successful business models around them. And this has attributes of those types of businesses.”

New Canaanites can expect newly branded “Choose To Be Happy” items in 2015, he said—Grayson is in the process of developing logos, graphics and content as part of a larger branding strategy. They will include not just apparel but also mugs, hats and tumblers, and eventually could include iPhone cases, backpacks and gift products—“a broad array” of items to which the phrase may be applicable, Goldberg said. 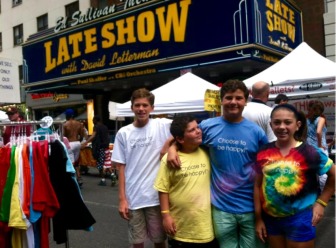 For the New Canaanites who launched the grassroots effort nearly two years ago, the upside of “Choose To Be Happy” as a business is that money made from the good vibes they spread can be re-routed back into causes that help people.

Asked for his long-term vision, Bruno said: “What I imagine is we get some branding and start making money and expand and then start giving money to charities, that is really the endgame here, to give money to Mike [Shullman]’s charity for a rehab center that’s focused on youth, but really just trying to look to improve people’s lives through charities. That is kind of the endgame because everyone who is involved is not looking to get rich, but to help people and get people happy—to have a business that sort of self-sustains that donation.” 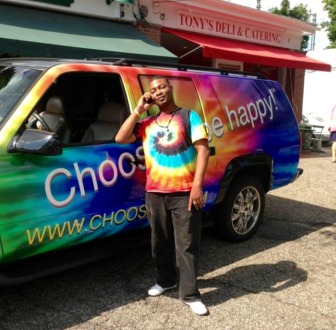 The Choose To Be Happy automobile by Zumbach’s Gourmet Coffee in New Canaan. Contributed

It’s already started working that way, Konspore said, describing a beneficiary of what “Choose To Be Happy” already has raised at sidewalk sales and out of a Main Street location offered up last summer by New Canaan’s Arnold Karp (whom, Konspore said, has been a major and generous supporter of the effort, along with Doug Zumbach).

The beneficiary, Konspore said, had been a local family going through a tough time when the engine on their car seized up—funds from “Choose To Be Happy” were used to purchase a replacement. 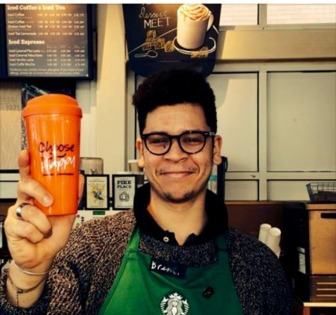 A Choose To Be Happy-branded cup. Contributed

Konspore—who professionally is an insurance agent (Shullman is owner of Russell Speeder’s Car Wash)—said that every location where T-shirts and other goods with the phrase have been sold, strangers started sharing stories of their own hard times and how much the message of “Choose To Be Happy” resonates.

“It’s so simple and the simple things are what people forget in life,” Konspore said. “If you choose to be happy, it is going to help you, and I think especially in this area we’re in, people tend to get caught in the rat race and everyday hustle and bustle.”

And something even more powerful starts to happen when people spot the words on someone else—what Konspore calls becoming “a walking billboard.” 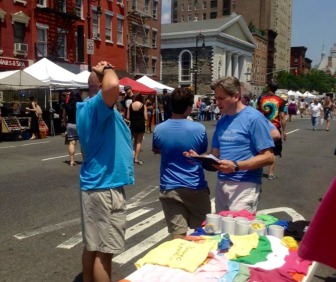 At a table selling Choose To Be Happy goods. Contributed

Bruno said he wears a “Choose To Be Happy” T-shirt often at work and that reactions are swift and powerful: “Their faces will light up and they say, ‘That is awesome.’ The comments are relentless, it always starts a conversation, that positive reaction.”

“One thing I always say when I’m explaining ‘Choose To Be Happy’ is that life is not always good, so choose to be happy, try to cut out the nonsense and try to enjoy the little things,” Bruno said. “Don’t worry about the bad things going on because so much of happiness is a choice and really, what people do so often is they allow things to get to them.”