The volunteer body that oversees God’s Acre at its most recent meeting voted unanimously to approve a proposed flagstone terrace that is to be installed at the top of the parcel on Park Street, opposite the entrance to the Congregational Church of New Canaan. 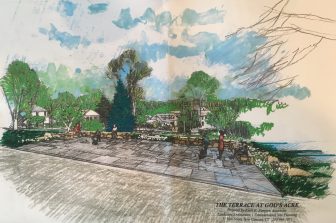 An early-stage rendering of the proposed Terrace at God’s Acre. Specs by Keith Simpson Associates

The Historic District Commission voted 5-0 at its Nov. 21 meeting to approve a required “Certificate of Appropriateness” for what those in charge of the privately funded project have dubbed the “Founders Terrace.”

Conceived as a permanent space where the Town Band can set up for Christmas Eve caroling, the terrace is to include a 24-inch wide sitting walls and is designed to serve as a gathering space for locals year-round, according to the group behind the project.

One member of that group, local landscape architect Keith Simpson, noted while presenting to the Commission that New Canaan in marking the 200th anniversary of its 1801 incorporation held a ceremony in just that spot, with local, state and federal officials, and a makeshift set-up of chairs and speakers. 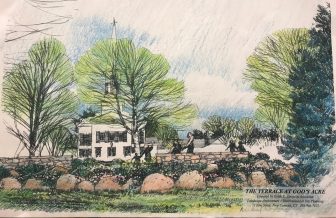 A rendering of the planned Founders Terrace at God’s Acre looking back up toward Park Street. Specs by Keith Simpson Associates

With the terrace in place, “if you had something going on here—and we don’t intend to have any tables or chairs there on a regular basis—but if you ever you wanted to have 200 people here, you just would close off a section of Park Street and extend out,” Simpson said during the Commission’s meeting, held at Town Hall.

The Commission had approved the terrace in concept in February and conducted a site visit in April when the area was staked out. In October, Rothbart said the Commission needed to have more formal discussion prior to approving the Certificate of Appropriateness.

In addition to Simpson, members of the group behind the project who attended the meeting included Leo Karl III, Tucker Murphy and Tom Stadler. They had received approval from both town funding bodies in September for a $50,000 special appropriation for the project, to be paid with private donations.

At one point while Simpson presented, Nissley interrupted him saying, “Thank you, Keith. That’s a signal now that I think we can talk better now and turn to questions.”

Simpson after trying to continue his presentation was stopped again, and said, “Sorry, am I boring you? There are some people here who weren’t here before.”

According to Simpson, leaders from both the church and New Canaan Historical Society have been consulted on the project and are supportive. The terrace is to be marked with a granite plaque and an inscription of some kind noting the important location of God’s Acre, where New Canaan was founded around the Congregational Church.

The Commissioners asked whether there would be any maintenance such as snow or trash removal (the group is raising an additional $50,000 for that type of work and the site should get a garbage receptacle of some kind), whether the terrace would be level with a sidewalk planned for that stretch of Park Street (yes), whether the boulders shown in renderings would be above ground (they generally go about one-third of the way into the ground) and why a beech tree near the proposed site would have to be removed (that’s not part of the project, the tree was tagged separately by the tree warden due to its condition).

Referring to historical findings that some of New Canaan’s founders are buried in God’s Acre, Rose asked whether there’s a Connecticut law that prohibits construction on cemetery sites.

“Does this have any implication with respect to that law?” Rose asked. “Are we clear?”

Murphy said a sonar study of the area  showed that nothing is located below-ground where the terrace is to go.

Karl said, “The history of the burial ground that is available shows them [burials] at the three corners of the triangle, not in this area, but just to be sure we did sonar,” Karl said. “And the other piece is that there is no excavation into the earth.”