That said, the best storyline—certainly the most poignant—might be that of NCHS senior Jarrett Torromeo. 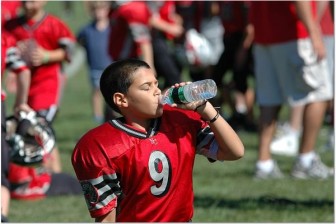 Ever since he started playing football in the third grade, Jarrett ‘JT’ Torromeo dreamed of being a New Canaan Ram. His best childhood memories include New Canaan Football’s “Youth Night,” when grade school kids run across Dunning Field in front of a packed house during halftime of a Rams game.

“You’d see the big stands and to me it looked like there were thousands of people there,” Torromeo told NewCanaanite.com. “I was just thinking one day I’d be here.”

After a successful stint in NCYF, during which his teams won five league championships in six seasons, Torromeo worked toward his dream, playing freshman and junior varsity football before finally seeing time on Friday nights as a varsity member of the Rams, as a junior last season. And although Torromeo’s playing time was limited on last season’s state championship team, with the majority of it coming in the second half of blowout wins, just being a part of it was the realization of years of hard work and sacrifice.

“It was thrilling just to throw on the varsity uniform and wear the jersey at school on Fridays,” Torromeo said. “It was great just being out there on Dunning Field with Lou Marinelli as my coach.”

Entering the 2015 season, Torromeo was poised to play a bigger role for the Rams, having ingratiated himself with the coaching staff due his work ethic, athleticism and positive attitude. 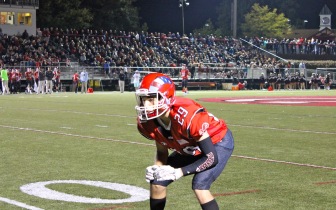 “He’s one of the hardest-working kids,” New Canaan head coach Lou Marinelli told NewCanaanite.com. “You talk about a kid who was really looking forward to it. He worked his way up the ranks—he played freshman, sophomore, junior varsity and now it was his time to shine.”

Yet for Jarrett Torromeo, that time would never come.

New Canaan was playing Mount St. Michael’s in the final scrimmage before the regular season was to begin. Torromeo was in his customary defensive back position, when an opposing runner bounced a carry to the outside and into the secondary.

“I squared him up, put my helmet into his gut and I had my foot perched up,” Torromeo said. “I saw my leg twist underneath me and felt a little snap and pop. Immediately I fell to the ground screaming. At first I thought it was my ankle, but it turned out to be my foot.”

Torromeo suffered a lisfranc injury, severely fracturing two bones in his foot. Surgery was needed to implant screws and piece the bones back together. His New Canaan football career was over.

“It’s so unfortunate because he was just getting to the point where he really felt confident that he could just shut down anybody that he faced,” Marinelli said. “And then something like that happens and it’s that harsh life lesson that you have to learn.”

Torromeo said: “At first I was really upset. I started to cry, and I just was upset knowing that everything I had worked for was gone at the moment.”

Until his teammates came to his side.

Led by senior co-captain Cass Knox, himself a victim of a potentially season-ending knee injury, Torromeo’s teammates and coaches besieged him with post-op visits, phone calls, emails and texts, encouraging him to recover quickly so that he could return to the Rams’ sidelines.

And that’s exactly what he did.

The very next day, the Rams opened their regular season against Ridgefield. And on the sidelines, replete with cast, crutches and a New Canaan Rams jersey was No. 29, Jarrett Torromeo.

“I thought the most impressive thing was that he had surgery and was back the next day,” Rams defensive back coach Frank Granito said. “He hasn’t missed a single day. He’s handled it much better than you could ever ask anyone to handle one of these things.”

Torromeo has taken on a role more akin to a coach than a player, and it’s a role that he has embraced, helping out younger players such as juniors Tommy Root and Ryan O’Connell improve their game.

“I just tell them what I see—technique-wise and how great they’re playing,” Torromeo said. “I help out our safeties in coverage and help coach up the younger players in practice.”

“He’s been in their ear,” Granito told NewCanaanite.com. “He’s helping them out every step of the way and giving them everything he’s got.”

“He’s at practice every day with the little scooter, coming around the field and doing whatever he can,” Marinelli said. “Whatever you ask him to do, he’ll do it. And that really says a lot—you can count him every day to be there. He knows he’s not going to play, but he’s still a part of us.” 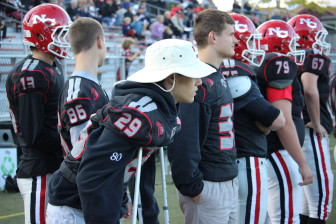 Should the Rams continue to win, it will undoubtedly be because of players like Collins, the Cognetta twins, Kyle Smith, Lucas Niang and many of the other stars who will get due recognition for their on-field accomplishments.

But it will also be because of players like Jarrett Torromeo, who is learning that although life isn’t always easy or fair, it’s how you respond to adversity that defines you.

“Things won’t go your way all the time, and that when there’s a bump in the road you have to find your way around it,” Torromeo said. “My takeaway is that whenever something doesn’t go your way, you can’t just hang your head and give up. You’ve got to find a way to complete your path.”