The problem is exacerbated at the complicated East Avenue/Main Street intersection, where motorists enter from three different directions (not counting those rolling out of the lot behind Varnum’s) and exit in four (if you include Forest). 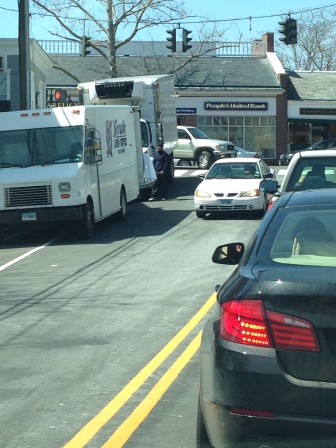 The way the light works, cars approaching from East Avenue often are forward in the intersection by the time the light turns red, and they continue either north or south on Main even though pedestrians have a walk signal, officials said.

“I must see 30 people go through that red light at East and Main every day,” Parking Bureau Supervisor Karen Miller said at the May 1 meeting of the Parking Commission, held at Lapham Community Center.

“It is just rampant. You will see two, three cars do it all at once. It’s really frightening. And I think that combined with the trucks obstructing the view, it’s a dangerous problem.”

In searching for an answer to the problem, Parking Commission Secretary Rick Franco urged the group to avoid restricting the trucks, saying, “Deliveries are a way of life.”

“Small businesses need daily deliveries not only because they most likely do not have the financial resources to stock substantial amounts of goods, but they also do not have the space,” Franco said. “Restaurants need deliveries every day.”

Parking Commission Chairman Keith Richey said that the group for years has been addressing problems caused by double-parking delivery trucks. In New Canaan, on-street parking matters are handled by the Police Commission—as parking commissioner Peter Ogilvie noted at the meeting. 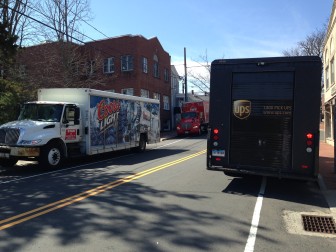 Asked about the problems at East and Main, Police Commission Chairman Stuart Sawabini noted that the matter has not yet been brought before the group. He did say that the problems at that intersection are aggravated by the Post Office.

“There is an issue with the Post office having caused concern related to the parking and volume of parking and trucks,” Sawabini said.

It’s a tricky area, too, because motorists traveling on Main aren’t able to access Town Hall, which is undergoing a renovation, or get directly from Main into one of the lots up behind it.

“Right now it’s just a very, very difficult spot in town and hopefully when [Town Hall] construction is finished—if we are fortunate enough to have the Post Office find a new location—this intersection will become safer and better,” Sawabini said. “We are in a tight spot. We cannot move the Post Office and cannot make the construction go faster.”

Asked at the Parking Commission for her point of view, Tucker Murphy—who works downtown but said she was at the meeting as a tax-paying resident—said, “You can’t mess around with safety.”

“When you can’t see behind a truck and you have to walk out and peek behind an 18-wheeler to see if you can walk across the street, and a car comes? I’m telling you, I will not negotiate with safety.”

Bill Walbert, a guest at the meeting who works in a Main Street office near the bottom of Elm, said double-parking right at intersections is the major problem.

“Main-and-East and Main-and-Elm,” he said. “They didn’t used to do this but in the last 12 months or so, they have double-parked right on corner, where you wouldn’t even allow a car to park.”

The next regular meeting of the Police Commission is scheduled for May 20.

Franco said he interacts regularly with truck drivers who are able to park in the alley around back of his Elm Street wine shop, to make deliveries.

“That is work,” Franco said of the delivery drivers’ jobs. “And I think a lot of us in New Canaan, we’re not in the same socio-economic group as the man with the delivery truck. They have to get their work done, too. And believe me, they cannot possibly enjoy being in New Canaan during the course of a workday and they’re probably pretty anxious to get to the next stop. And subsequently get home at the end of the day.”