Rather than search for violations connected to a proposed 116-unit apartment-and-condo complex, where no cemetery exists, leaders and historic preservationists in New Canaan should focus on the “high level of desecration” that has affected known burial plots next door, an expert in the field said Tuesday night. 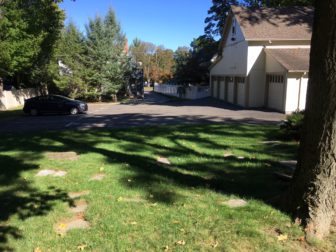 Looking east from the M2 property toward a paved driveway behind a South Avenue condo, where a cemetery expert says a burial ground has been paved over. Credit: Michael Dinan

The eastern portion of the historic ‘Maple Street Cemetery’—not the portion owned by hopeful ‘Merritt Village’ developer M2 Partners—includes plants and mulch placed directly over known graves, and “what makes matters worse in terms of demonstrating the desecration” is a driveway that has paved over the burial sites of Rufus St. John and Richard Fairweather, according to Andrew Mellilo of Greenwich-based RVDI, a land use consulting firm.

“We know there are bodies in those plots and it has been paved over,” Mellilo told members of the Planning & Zoning Commission during a special meeting, held at Town Hall. He told the commission that an underground surveying company determined that there has been no disturbance in the soil on M2’s property, such as would be caused by a decomposing body or the presence of graves.

“Perhaps the goal should not be to attempt to suggest that there should be a buffer when M2 has already made the proper preparations and demonstrated consideration in their building plans to not allow a desecration to occur during the building process, but maybe we should focus on the desecration that has been allowed to go on for decades.”

He spoke during the sixth public hearing on Merritt Village, a widely discussed and divisive plan to create 116 new units on a combined 3.29-acre parcel where 38 now exist. The neighbor to which Mellilo referred appears to be 83 South Ave., a multi-unit, 1890-built structure called ‘Southfield Lane Condo’ that encompasses 1.23 acres, tax records show. The single-lane driveway for the structure runs alongside and behind it, stopping short of several gravestones that dot a lawn that backs up to the Merritt Apartments property.

Ultimately P&Z continued the Merritt Village application to a future hearing. Commissioner Laszlo Papp, who chaired the meeting in the absence of Chairman John Goodwin, noted that—given proof of clear title and a formal opinion submitted by the office of the town attorney—P&Z has little else to hear regarding the cemetery vis-à-vis the M2 application. Papp noted that a further test on the M2 land, which involves a 1-foot excavation, would further confirm that no bodies are buried at the site.

P&Z commissioners asked whether a state dictum regarding a 50-foot buffer for historic cemeteries is a recommendation rather than a requirement (yes), whether anything is in that radius now (a garage now stands 10 to 15 feet away), whether any attempt has ever been made before to protect the Maple Street Cemetery (no, though during a meeting in 1939—great year for movies—the Board of Selectmen meeting noted its poor condition), how many gravestones have been found in the cemetery (26) and how certain Mellilo is that there are bodies under the driveway (100 percent).

The public hearing followed an opinion rendered by attorney Peter Gelderman of Westport-based Berchem, Moses & Devlin, P.C. Speaking as counsel to the town, Gelderman found that since there’s no evidence anyone is buried on the portion of the Maple Street Cemetery site that is owned by M2 Partners, then the ownership group would not run afoul of any laws that govern cemetery preservation by building near it (the area is to be preserved as green open space in any case, according to the Merritt Village site plan).

Gelderman addressed P&Z at the hearing and reviewed the reasons he reached his conclusion, noting that he relied on the applicant for the title search though he did contact the title insurance company directly in his research.

Asked by commissioner Tony Shizari whether the town would be at risk if it turns out later that someone is buried in the M2 property, Gelderman said no so long as it’s approved with a condition.

“The risk is on the applicant,” Gelderman said.

For the final time, several members of the public took to the podium to express their thoughts and feelings on the proposed development. A handful of those speaking out against Merritt Village cited the cemetery findings and said that they were concerned about the possibility that residents of newly built units could be in place when a question of title came up because of buried bodies found, a prospect that could disrupt the lives of New Canaanites living there.

Town resident Chris Hussey identified herself as a longtime trustee of St. Aloysius Church and said she’s heard from many people throughout town who are concerned about the safety of kids who attend the school there.

Between Monday and Thursday, some 1,200 kids come to St. Aloysius, she said.

“As far as the children, I am trying to process in my mind how we can have buses and trucks,” Hussey said. “Children are not necessarily controllable. They go all over the place. God forbid anything should happen.”

She called for P&Z to ensure that safeguards are put into place.

“I would hope that something can be done—not haphazardly, but in a very organized fashion, to make sure, whether it is police or whoever gets them, we have someone on site to watch,” Hussey said.

Speaking in favor of Merritt Village, town resident Mary Davis Cody told P&Z that New Canaan has “changed tremendously” since 1992, when she bought a house God’s Acre and “nobody wanted to live in town.”

“Now you can’t get any closer,” she said. “So I think that it’s great that the commission is looking to say, ‘Where are we going in the future? Where is our population?’ ”

Davis Cody said she’s a CPA with many older clients and “right now those people with their houses on the market, they are looking for some place they can move to in New Canaan.”

P&Z’s next regular meeting is scheduled for Oct. 25.