The hopeful developer of the Roger Sherman Inn property has clarified that he does not intend to raze all of the existing historic structure under his newest application, as NewCanaanite.com had reported last week. Andrew Glazer of Rowayton’s Glazer Group intends to pick up and move the oldest portion of the 18th Century-built inn closer to Oenoke Ridge Road, converting it into one of six new residences planned for the 1.89-acre site. He outlined that plan during a public hearing last month before the Planning & Zoning Commission.

New Canaan’s Michael Nowacki is featured in a Connecticut Mirror news story that ran Jan. 13, regarding his interest in hearings in Hartford before the state legislature on judges seeking reappointment.

***
The Town Council on Wednesday night voted 11-0 in favor of a $267,000 special appropriation for the New Canaan Land Trust to help the organization purchase the Fowler property on Silvermine Road. The acquisition will create a 47-acre “Silvermine Fowler Preserve.” The local legislature’s unanimous vote follows similar support from the Boards of Selectmen and Finance last week. Councilman John Engel abstained from the vote. He sits on the Land Trust Board of Directors. 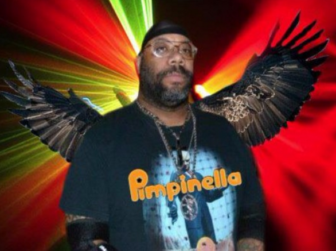 Longtime New Canaanite James Trusty has launched a GoFundMe page to help get over a hump where he’s out of work and facing some serious health issues. Donations will go toward rent and basic utilities, while Trusty waits for disability insurance to cover costs associate with heart and kidney problems. His page is called “Staying alive and roof over my head.” As of early Thursday, Trusty had raised $1,215 of his $6,500 goal. 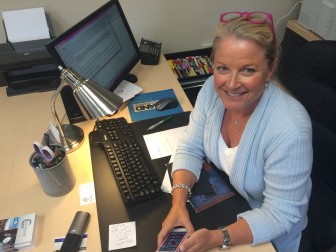 Town resident Tucker Murphy is now qualified as a Justice of the Peace.

New Canaan’s highest elected official on Tuesday issued a town-wide water conservation alert. Though New Canaan has seen some rain and snow, it hasn’t addressed the severe shortage that carried over from last summer. First Selectman Rob Mallozzi said New Canaan is still under a water emergency and that there’s a plea for further conservation of water usage by 20 percent. The water company is posting information online here. 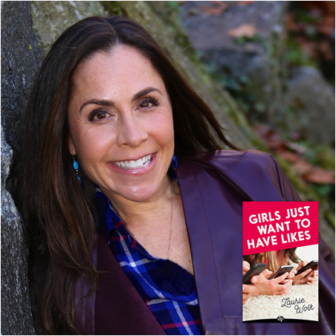 Mark your calendars for “Smart * Strong * Special”—a mother-daughter workshop from New Canaan-founded nonprofit organization LiveGirl. Featuring author Laurie Wolk, the free workshop (registration is required) is to be held at 7 p.m. on Wednesday, Feb. 1 in the cafeteria at Saxe Middle School.

The New Canaan Police Department reported Wednesday night that drunk driving charges are up year-over-year, from 32 to 43 YTD. Overall, motor vehicle violations are up 13 percent year-over-year, Police Chief Leon Krolikowski told members of the Police Commission at their regular meeting.

The Stamford woman who is suing New Canaan after tripping on a stair at Outback Teen Center two years ago and falling down has removed builder Ashforth Properties from her lawsuit, documents show. 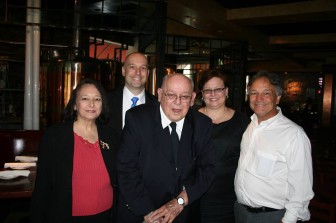 Finally, here’s a gallery of other news from around town: 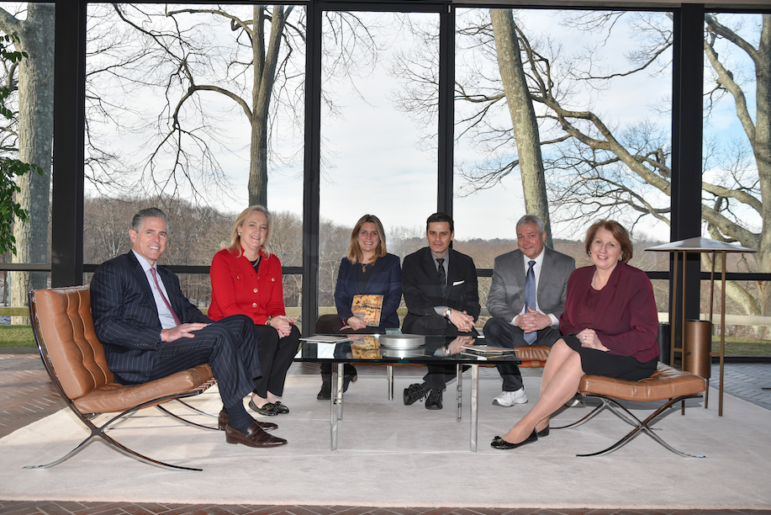 Bank of America announced the Glass House is the recipient of a grant from the Bank of America 2016 Art Conservation Project. This grant will provide funding for the complete replacement of the Glass House ceiling, consisting of approximately 1,800 square feet of self-colored plaster. The Glass House, built in 1949 by architect Phillip Johnson, is a site of the National Trust for Historic Preservation. Johnson and his partner, David Whitney, hosted legendary gatherings at the house during their life together, which brought together artists, architects, philanthropists and other cultural figures. Today the Glass House continues this rich tradition by presenting exhibitions, performances and programs. “The Glass House is an international icon of modern architecture where visitors come to study and celebrate architecture, art, design and landscape architecture,” said Glass House Executive Director, Gregory Sages. “The replaced ceiling will allow visitors to experience Johnson’s intended design and functionality of the house and the objects contained inside.” “The arts are a powerful tool to help economies thrive and help individuals connect across cultures,” said Bill Tommins, Southern Connecticut market president at Bank of America. “The Glass House has provided residents of Southern Connecticut with rich cultural experiences for a decade, and Bank of America is proud to support the restoration of its ceiling through the Art Conservation Project so that this iconic house can be enjoyed for years to come.” The Bank of America Art Conservation Project is a unique program that provides grants to nonprofit museums throughout the world to conserve historically or culturally significant works of art that are in danger of deterioration. Since the program’s launch in 2010, Bank of America has provided grants to museums in 29 countries supporting over 100 conservation projects. Projects in 2016 include ‘Blue Boy’ a painting by Thomas Gainsborough at The Huntington Library in Los Angeles; a painting by Claude Monet at the Kimbell Art Museum in Ft. Worth, Texas; 11 works of art at the Museum of Contemporary Art in Chicago including ‘Jackie Frieze, 1964’; three monumental paintings by Salvador Dali at the Dalí Museum in St. Petersburg. Fla.; and a 6th century haniwa (terracotta tomb figure) at the Tokyo National Museum. For more information please visit Bank of America’s Art Conservation Project website. 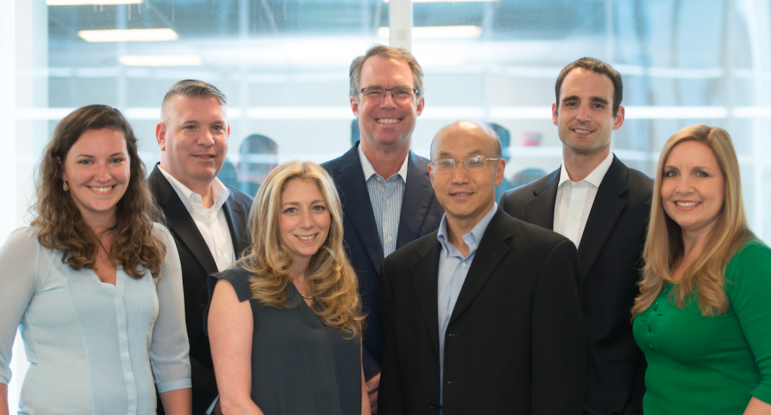 BenchmarkITs Team, L-R: Alexa Papp, John Wilson, Allison Junquera, John Bemis, James Shen, Vince Greco, and Erika Murray. John Bemis believes when recruiting in today’s white-hot technology marketplace, nothing beats a face-to-face meeting. Bemis, a New Canaan resident, is the founder and president of Benchmark IT, a leading technology recruiting and staffing firm based in Stamford, CT, serving the Tri-state area. Benchmark IT recently moved their headquarters to newly renovated offices at 2777 Summer Street in Stamford. “We firmly believe the best way to determine a candidate is the right fit for a position is to meet them in person,” says Bemis. “While the right technical experience and skill set are vital, an individual interview is a more high-touch approach to understanding each candidate's overall fit. The same goes for our clients. We visit them frequently to experience the company culture so we can share the entire picture with an applicant.” Benchmark IT is all about creating to an ideal fit, ensuring each candidate is selectively matched to each client. This produces a minimum of unproductive interviews for all parties involved. Benchmark IT’s spacious new headquarters include private interview rooms for recruiters to confidentially consult with the dozens of IT professionals they meet on a weekly basis. The space also includes a sizable conference room, open-plan sales floor and dedicated break room. New offices aren’t the only facelift for Benchmark IT in 2017. The company recently rebranded their identity and launched a robust company website www.bmarkits.com. The site includes an enhanced array of job search features including an all-new online job board, automatic job alerts, real-time chat with recruiters, and social sharing capabilities. “Our goal is to not only make it easy and desirable for qualified candidates to engage with us,” say Bemis, “but also to ensure our clients are presented with the best technology talent in the industry.”

Back row, L-R: Deanna Gladstone, Kara McLaughlin, Stephanie Tancs, Madeline Ciampa, Rachel Iannazzo, Vanessa Wynter, Olivia Linnartz. Front row, L-R: Michelle Han, Isabella Osinovsky, Alyssa Fish, Natalie Pesantez, Danielle Nugent, Sarah Meyer The Southern CT Synchronized Skating team (SCSS) of the Shadows, Shimmers, and the Sprites—which include New Canaan athletes—racked up their medal count at the 33rd Annual Colonial Classic Synchronized Skating Competition in Lowell, MA this past weekend. Seven judges unanimously ranked the SCSS Sprites in first place for their gold-winning program to Motown classic, “Ain’t Too Proud to Beg” by The Temptations. This is the line’s second gold this season, and their 5th consecutive gold in two seasons. In Saturday’s group of four Synchro Skills Level 2 teams, the Sprites performed their program flawlessly with energy and big smiles. “We hope we make it look easy as our line has its challenges with different skill levels and big age differences from our youngest seven-year olds to our oldest 13-year-olds,” said 10-year-old Sprite Caroline Ellis. Rebecca Middlen, a second year Sprite and 13-year-old skater from Norwalk added, “The older, more experienced Sprites try to help the younger or first year Sprites by preparing them for what it’s like to skate at the awesome Tsongas Center arena.” The SCSS Shadows earned silver on the podium for their captivating swing dance performance to Jessica Simpson’s “Swing with Me Baby”. The group of seven Open Juvenile teams was highly competitive with first place winner Rainbow Connection from Potsdam, NY, skating a fast Irish jig; a British-Bond theme from Team Esprit; a Latin theme from Team Munchkins, and other teams skating to music from Beyoncé, Queen, and 80’s pop tunes. “We got a lot of things right today – we felt together and there was good energy from the audience and judges,” said 15-year-old Shadows skater Danielle Nugent. Gina Valenzano-Gomez, SCSS Head Coach said, “While it’s been a long day, I am very, very proud of all three lines. They practiced hard, handled challenges really well, and today, we really pulled together as one team supporting each other on and off the ice.” The three coaches Gina, Val Legutko and Kari Pace started their challenging 16-hour Saturday with a 5AM practice, followed by a full day of competitions for each of the three SCSS lines, and ended the day after 9PM at the rink. The consistently successful SCSS team benefits from these coaches’ unwavering commitment and dedication that they demonstrate every day – and have done so for the last 20 years. This year’s team is comprised of 41 skaters from Stamford, Greenwich, Westport, Darien, Norwalk, New Canaan, Southport, and White Plains, NY. For more information about the SCSS team, visit: www.terryconnerssynchro.org 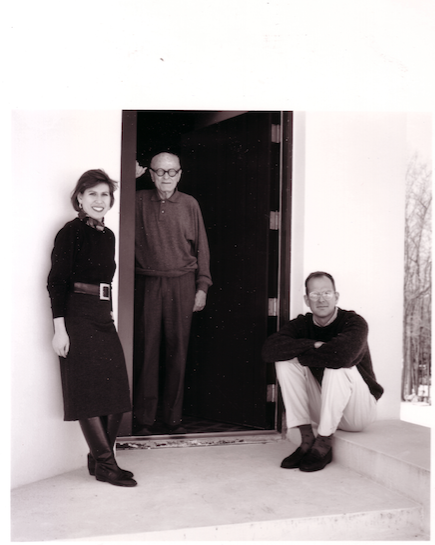 The Glass House, a site of the National Trust for Historic Preservation, is pleased to announce the appointment of Hilary Lewis as the site’s Chief Curator & Creative Director starting January 17, 2017. Lewis has spent more than two decades focused on the work of Philip Johnson. As an architectural historian, curator and journalist, she has researched, presented and written many materials on Johnson since her first collaboration with the architect in 1992. She spent over a decade working directly with Johnson on texts, exhibitions and a multiyear project of recording his memoirs. “Having sat side-by-side with Johnson for years, I feel confident that what would honor his and David Whitney’s memory most would be for the property to evolve further as a center for the appreciation of architecture, design and art not just as a museum of Johnson and Whitney’s lives in New Canaan,” noted Lewis. “It’s an honor to have the opportunity to work directly with the Glass House as it looks forward to its second decade of public engagement.” “Hilary Lewis has influenced the Glass House site since its inception as a public museum. She will be a great addition to a great team. I look forward to her continuing contributions in programming content, visitation alternatives, site interpretation and team management.,” said Gregory Sages, Executive Director at the Glass House. Lewis received her training in architectural history and urban planning at MIT and Harvard, where she also taught. Since that time, she has co-authored Philip Johnson: The Architect in His Own Words and The Architecture of Philip Johnson, the former receiving the 1995 AIA International Architecture Book Award. As an author, she has contributed to a variety of books on architecture and planning and has been a founding editor of four magazines on architecture and design, which deepened her knowledge and experience relating to Midcentury Modern architecture. Overall, her work addresses the public aspects of architecture, preservation and design. As a curator, Lewis developed the show and catalog Philip Johnson: Architecture + Art for the Johnson-designed Kreeger Museum. In 2007 she was named the Philip Johnson Scholar at the site. Until recently, Lewis served on the Glass House’s Advisory Council.