First Selectman Kevin Moynihan said during Tuesday’s meeting of the Board of Finance that the next phase of the natural gas installation project, bringing it to the downtown, will start in April.

First Presbyterian Nursery School aced its most recent unannounced inspection by the New Canaan Health Department. It was conducted Dec. 11 and officials found no code violations at the Oenoke Ridge Road facility.

Looking to do something special on Valentine’s Day? Aetheria Relaxation Spa on Cherry Street is hosting a “Package of Love” that includes a duet massage, flowers and chocolates, a $25 gift card to Red Grape Wine and dinner for two at Cava Wine Bar.

Starting Feb. 19, Town Hall hours will shift 30 minutes earlier, to 8 a.m. to 4 p.m., a decision made by the first selectman to help municipal workers who use busy roads such as the Merritt Parkway. Moynihan also is seeking the public’s feedback on proposed “special summer hours” that could include one late-day of closing hours—for example, staying open until 6 p.m. Mondays or Wednesdays—while closing at 1:30 p.m. Fridays. 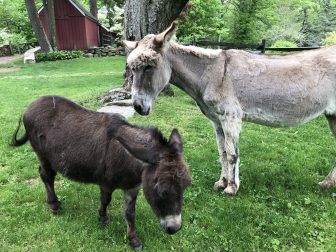 Two of the four donkeys that will be joining the Nature Center mini-farm. Credit: Eva Pace

The town on Wednesday issued a permit allowing the installation of a new pre-built barn at the New Canaan Nature Center that will house four donkeys. At a cost of about $6,000, according to the permit, the 360-square-foot barn will sit on a 30-by-12-foot stone bed.

Congratulations to Rucci Law Group’s George Reilly, a nine-time, top-rated attorney included in New England Super Lawyers and Kate Diehm, a “Rising Star” for three years in a row! Reilly has also been recognized in Best Lawyers in America 2019 and an “Honored Listee” in Marquis Who’s Who in America 2018.

A reminder that New Canaan Library’s Spring Edition of the “Author Talk and Lunch,” to be held March 7, features Tayari Jones, author of the novel “An American Marriage.” Tickets are on sale now and details can be found here. 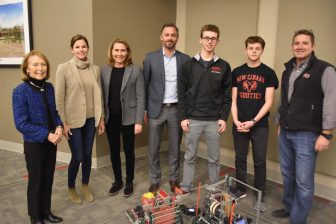 Congratulations to the New Canaan High School‘s Vex Robotics Team, which advanced into the Southern New England Vex Robotics Regional Competition taking place March 2 to 3, in Worcester, Mass. Members of the team made an informal presentation to the Board of Education prior to its Jan. 22 meeting.

The New Canaan Land Trust is holding its free “Stone Wall Building Workshop” from 8 a.m. to 12 p.m. Saturday at Hicks Meadow, across from 514 Silvermine Road. In addition to a number of habitat restoration projects at the Hicks Meadow, the nonprofit organization is continuing its efforts to rebuild a historic stone wall along Silvermine Road. Local stone mason, Greg Faillaci will teach participants the art of building a dry stone wall. This event is weather-dependent, so please RSVP to Info@NewCanaanLandTrust.org in case inclement weather forces NCLT to reschedule.

The Land Trust also is announcing its summer steward internship for local high school students. Details about the popular program, including application instructions, can be found on the NCLT website here: https://www.newcanaanlandtrust.org/summer-steward-internship.

For anyone who was unable to attend, here’s the Channel 79 video of January’s “Forum on Public Buildings”:

Finally, congratulations to the NCHS Boys’ Varsity Squash team for its successful run at US Nationals. The following write-up is from Lisa Platt:

“The NCHS Boys’ Varsity Squash team was one of 120 teams from around the nation that competed in the US High School Squash Championships this past weekend. This year, the team played in Division IV, one division higher than last year. The squad consisted of seniors Will Comyns at 1, Teddy Manges at 2 and Reid Dahill at 3, juniors Brad Hennessy at 4 and Jamie Cutler at 5, and sophomores Charles Brossy at 6 and Austin Platt at 7. Comyns, Cutler and Brossy won their first-round matches, but the team would fall in a heartbreaking 4-3 loss to Loomis Chaffee, the eventual runner-up of the division. The team was able to regroup and win their next three matches to win the consolation. They defeated Riverdale handily 7-0, with each player winning 3-0. The team then faced Greens Farms, who they had lost to earlier in the season. This time would be different, with Platt securing an exciting first win 3-2, after overcoming a 2-0 game deficit. Dahill was next to win, needing 4 games to finish while Comyns was able to win easily 3-0. All tied at 3 wins each, it would all come down to Hennessy, who would go the distance and outlast his opponent 11-6 in the fifth and final game, moving NCHS to the consolation finals. Their finals opponent would be Kent, who NCHS had beaten earlier in the year but Kent’s #2 player had not played that day. It would be a grueling contest, with each match close, but NCHS would prevail 5-2 overall. Manges, Dahill and Brossy each won 3-1, Platt won 3-0 and Comyns, behind 2-1 after the first three games, battled back and played long, arduous points to win his incredibly exciting match 3-2. The team’s final contest of the season will be the FairWest tournament at Chelsea Piers this coming weekend.”