The owner of 69 Hoyt Farms Road paid the town $1,225 in fees after the Building Department issued an after-the-fact permit for $60,000 of work that he’d done on his own home. The work involved finishing a 917-square-foot basement, creating a bathroom, pantry, main room and back room plus a food prep area, according to the permit. “Kindly note that all the above work was done without obtaining the necessary permits,” the permit said. “This means that all required inspections during construction were not performed.”

The town has scheduled 421 assessment appeal hearings in March, according to a schedule published on the municipal website. Officials have said the town could see a reduction of about $20 million to its Grand List after the Board of Assessment Appeals finishes its work.

We wish the very best to Nelson Oliveira, a journalist that locals will remember fondly as the New Canaan News reporter from about four years ago. He made this professional announcement earlier in the week:

We interrupt this program for some PERSONAL NEWS: After almost two years away from newspapers, I am back! And I’m excited to join the national desk of New York’s Hometown Newspaper, the @NYDailyNews, as a breaking news reporter.

The town on Feb. 27 issued a permit to demolish part of a 1951-built Cape Cod-style home at 42 Osborn Lane.

The owner of 35 Benedict Hill Road paid the town $800 in fees after the Building Department issued an after-the-fact permit for $32,000 in work, including the creation of one large room in a 500-square-foot space. The work included sheetrocking, carpet, outlets and lighting, the permit said.

Julie Pryor, founder of Pryority Wellness on Grove Street, has teamed up this month with New Canaan-based Diane Nickelberg-Barnett of Grounded Meditation to offer meditation, which they’re calling “the ultimate mind-body programming.”  They’ll offer five classes per week at the Pryority Wellness Center at 45 Grove St. beginning March 26, as well as, “Mantra Meditation,” on Tuesday and Saturday mornings at 9:30 a.m. and 9 a.m. respectively. 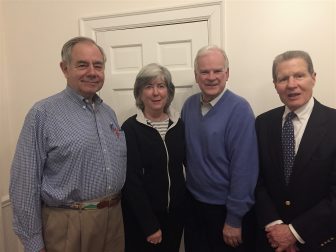 Staying Put in New Canaan welcomed four new members to its Board of Directors: Dr. Sherman Bull, Donna Simone, Chris Snyder, and Tom Stadler. Bull—a graduate of Yale University and Columbia Medical School—had a 42-year career as a general surgeon at Stamford Health, and served as Chief of Staff, as well as Associate Chief of Surgery, at Stamford Hospital. Simone, a town resident for 32 years who graduated from Thomas Jefferson University Hospital in Philadelphia and is currently a licensed RN in Connecticut, served as Assistant Director of Staying Put in New Canaan from the day it opened its doors in 2008 until 2017. She had a 20-year career as a Mental Health and Home Care Nurse, and has been an active volunteer with the Junior League of Stamford-Norwalk, the Boy Scouts of America, and the New Canaan Red Cross. Stadler moved to New Canaan in 1990 and has served as the Town’s Administrative Officer for the last 10 years. A graduate of Xavier University, where he earned his bachelor’s degree in business administration in accounting, he worked as a partner with Deloitte LLP, where he served 16 years in client service and 22 years in national firm management. Snyder, who holds a doctorate degree in econometrics from Lehigh University, spent more than four decades developing infotech applications for financial companies and the Pentagon. 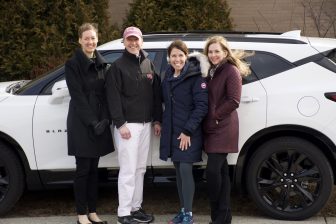 NCHS Service League of Boys demonstrated its mission of community responsibility and leadership skills at the Tim Tebow Foundation’s “Night To Shine” event in New Canaan. Night To Shine is a prom for young adults with special needs that includes limo rides, dinner and dancing. SLOBs members assisted with parking (Aidan Smith), clean up (Alexander Meintzer, Ben Thorsheim, and Miles Wheeler) and as a buddy to attendees (Luke Hickey and Skylar Timberlake). 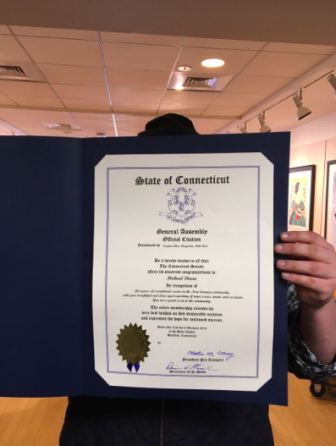 Here it is. Mike Chen photo

Finally, my heartfelt thanks to state Sen. Alex Bergstein and to Lisa Vasquez, who took me completely by surprise in delivering a generous citation from the General Assembly during Thursday’s monthly coffee at New Canaan Library. Part of it says: “In recognition of five years of exceptional service to the New Canaan community with your insightful and clear-eyed reporting of town issues, events and residents. You are a great asset to the community. The entire membership extends its very best wishes on this memorable occasion and expresses the hope for continued success.” I hope so, too—thanks again.