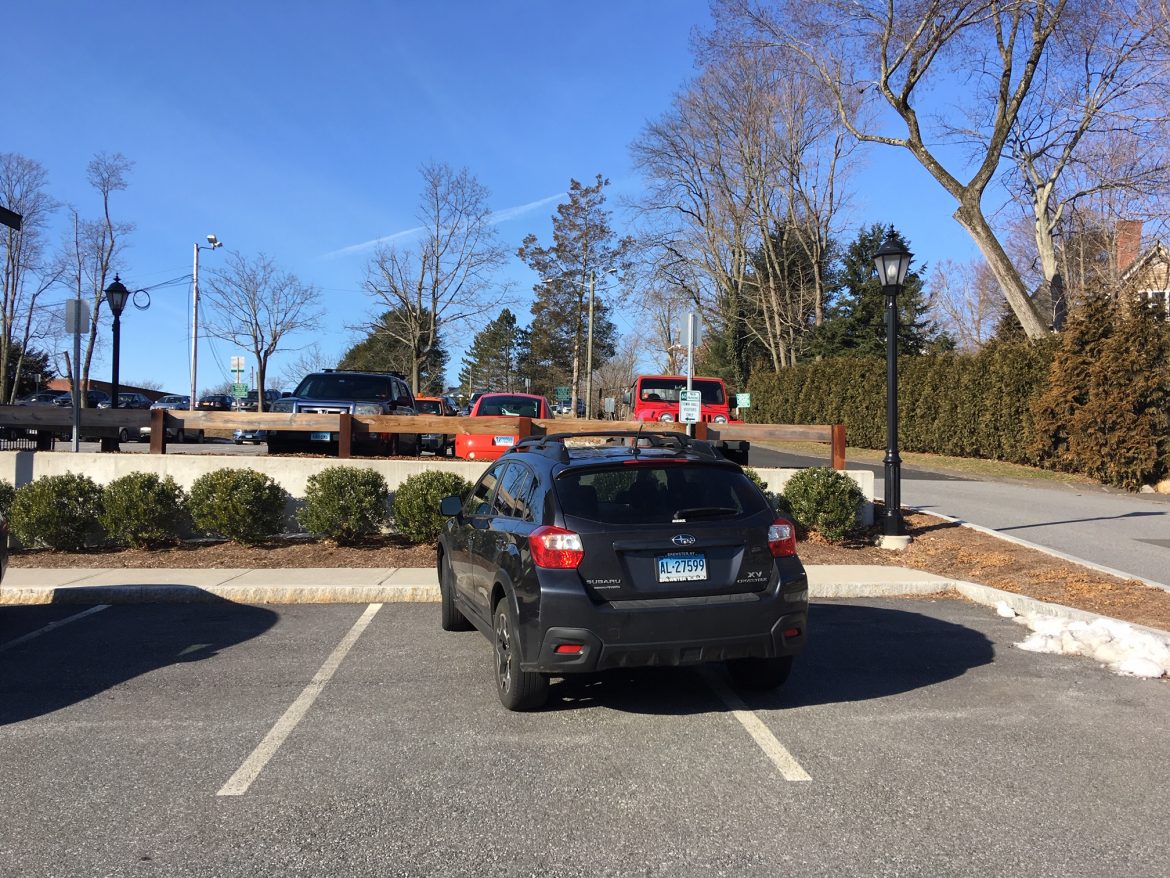 How do you park like this and then walk away from your car like everything is normal? Credit: Michael Dinan 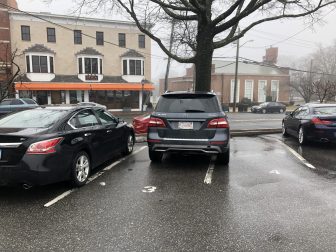 The answer is ‘No,’ this Massachusetts person did not park like this because of the car on the left. It’s diagonal parking, you can swing your door open by pulling into a space the right way. BT photo

“Delivery driving—had to rush to complete customer order and avoid reprimand from employer (GrubHub), snowfall made it unclear where the no parking zone began and ended. $30 would eliminate a few hours of delivery work. Better parking locations were pointed out afterward.”

“Left my car for under 5 mins to go down to Elm Street to pick up my phone after I could no longer find a pkg place on Elm.”

“I was parking in the lot near Spiga with my 2 year old son to take him to lunch, on one of the extremely cold days and it was very windy. I went to machine to pay and it would not take my credit card. Under ordinary circumstances, I would have tried the other machine, but my child started screaming from the cold and salt was blowing in his face and I thought I had to get him out of the cold asap. I am willing to pay the $2.00 to park and would have been that if I was able. But I appeal the ticket given the circumstances and the safety issue for my toddler in the wind chill.”

“I was parked where there was a sign signifying the area as a landing zone. I can provide a picture of said sign. Sign states no parking between 7 am & 11 am. I briefly pulled up to load an order from Organika Kitchen. I was there for no more than 2 minutes in the loading zone. Why there is a sign for a loading zone in a crosswalk is beyond me. Tried to issue 2 tickets for the same offense.”

“I live in Westport but occasionally shop in New Canaan. Today around 2:30 pm I parked in the meters parking lot to shop at Space NK and Polo (Spot #38) and went to pay $1 for an hour at the meter machine. The sun was hindering the visibility of the screen, and I sincerely thought I had paid the $1 with my Visa card as I saw a portion of the screen say I had until 3:39 pm or so until my time expired. I did not see anything that indicated I had to press further buttons, likely due to the glare of the day. At any rate, I did think I had paid the $1. There are so many situations where there is either no receipt provided or the payment is automatic, I did not think there was an extra stop to finish the transaction, once I saw the time of 3:39 pm. I was therefore very surprised to see a ticket on my car. I dutifully pay for parking and I would respectfully request a waiver of this $25 charge on a one-time basis.”

“I received a ticket during the snowstorm on the 12th. I was the only one at work and could not leave. There was ample parking and feel it was unnecessary during the snow storm.”

“At 10:11, I arrived on Elm Street in New Canaan, Connecticut. I parked within 30 feet of the Starbucks on the corner. I was attempting to pick up a check from a job. I was recently employed at Baldanza Restaurant. There was still a good amount of snow on the ground of where I parked. I have photographic proof showing the distance I parked and where shows no indication of a no parking zone. Do to the excess snow on the ground.”

“I am a longtime volunteer at the NC Library (10 years!). I go every Monday to work on the biannual booksale. Today I got a ticket on Main St. fro 15 min over the 2-hr limit. But when I got to the library at 10:15, there were no (0) spaces in the library parking lot. I would like to appeal this ticket because volunteers should not have to pay for parking at the library.”

“I work for the Boy Scouts of America and came to New Canaan for a meeting to discuss how to help develop the scouts and young people of New Canaan. The meeting went well and took longer than expected. I received a $25 ticket. The Boy Scouts of America works hard to develop young people. However we operate on a shoe string budget. It would be greatly appreciated if you would waive the 25 fine.”

“My mother, who has lived in New Canaan for over 50 years, had a stroke in October and is thankfully living back at home now. I was picking something up at the Health Food store and puled into a parking spot where the sign posted said ’15 minute parking.’ I did not see any yellow lines on the road when I parked. I believe it was a combination of the lines missing paint and being covered by sand. I saw someone taking a photo of my car from the window of the health food store as I was paying and literally ran out because I thought someone hit my car. I explained to the parking officer that I was unable to see the lines and followed the sign said ’15 minute parking.’ She said it was too late and I immediately moved my car so I could go in and finish paying.”

One thought on “‘My Child Started Screaming from the Cold’: Parking Ticket Appeals ”