Congratulations to New Canaan’s Steve Benko and Garland Allen, who are to be inducted this summer into the FCIAC Hall of Fame. The conference’s banquet is to be held June 13 at the Norwalk Inn. Many know Benko as the town’s recreation director. He is being honored for “officiating and cross country roles,” according to the FCIAC. Allen serves on New Canaan’s Youth Sports Committee and he is to be honored for “Greenwich athletics,” the conference said. Other members of the Class of 2019 induction class include Lisa Lindley (Darien Girls Lacrosse), Paul McNulty (Wilton/Staples Boys Lacrosse), Jim Moriarty (Stamford Athletics) and Shaun Ratchford (Danbury Baseball). In addition, John Keogh is receiving the Ralph King Award and Ro Carlucci the John Kuczo Award.

Saying the superintendent of schools and Board of Education have “made great strides” in bringing forth a responsible spending plan for next fiscal year, First Selectman Kevin Moynihan on Thursday night broke a 6-6 tie on the Town Council to preserve the district’s proposed operating budget, which came in at a 1.86% year-over-year increase. The Town Council passed a total budget of $150.9 million that’s essentially flat over the budget approved one year ago and represents a decrease of .43% from this year’s amended budget. During its regular meeting, the Town Council voted to tighten up the proposed capital budget, removing $225,000 earmarked for a roof replacement at the Playhouse as well as reducing public funding for Waveny trail work from $50,000 to $30,000.

Tony’s Deli failed an unannounced health inspection Monday after a sanitarian with the New Canaan Health Department found a “risk factor violation”—namely, pastrami at 74 degrees in a reach-in refrigerator wrapped in plastic wrap, tuna salad at 71.6 degrees in a covered plastic container in a walk-in refrigerator and potatoes in a covered plastic container at 53.6 degrees in a walk-in refrigerator. A note on the inspection report says: “All potentially hazardous foods must be 41 degrees or less; food items that are cooling must be uncovered and protected until they reach 41 degrees or less. Thick food items like tuna salad will not coo properly in a covered container. The temperature of the food in the middle will be warmer, and not cool properly.” A re-inspection is to occur “ASAP” at the Pine Street food service establishment, according to the inspector’s report, and before April 15.

Mark them on your calendar:

As expected, demolition of the Richmond Hill Garage commenced Thursday. Here’s a video from the Franco’s Wine Store Twitter account:

For it or against it, down comes the #NewCanaan Mead Park Barn pic.twitter.com/ifTGZxaBoq

The town on March 19 received an application for an after-the-fact building permit at 218 Summer St. The work involved a finished basement with two rooms, the finished space plus a mechanical room, totaling about 548, according to the application. The property’s owner did the work, the application said.

New Canaan Police at 12:11 a.m. on March 29 cited a 21-year-old Danbury man for possession of less than .5 ounces of marijuana after approaching a car that was pulled over at Old Stamford Road and Weed Street. 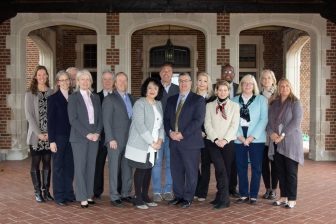 The New Canaan Community Foundation will hold its annual Philanthropy Luncheon on April 30 at Woodway Country Club. Writer, comedian, activist and author of “Boy Meets Depression” Kevin Breel will be the featured speaker. The luncheon is co-chaired by Annie Drapkin and Kajsa Sheibley. Sponsors include Bankwell, Karl Chevrolet and Rucci Law Group.

New Canaan’s Colleen Hann, a 1992 New Canaan High School graduate, is living with lupus and is a Lupus Foundation of America ambassador. Read her story here on the LFA website. Hann will participate in the May 4 Walk To End Lupus, and she’s met 61% of her $10,000 fundraising goal. Here’s her fundraising page for the Walk.

elm restaurant on Elm Street on March 1 passed its local health re-inspection, scoring 94 points out of 100, after failing its Feb. 15 inspection. A sanitarian at the time found “milk/cream at 64 degrees in a two-door reach-in refrigerator at the coffee station,” an overly high temperature. Several other food services establishments aced their health inspections, including Greens on the Go at Pine Street Concessions (96/100), Saxe Middle School cafeteria (100/100) and Cherry Street East (95/100). The Roger Sherman Inn also passed its March 22 unannounced inspection with a score of 83 out of 100. Among the non-risk factor issues cited was “food bags open in basement (rice and flour)” and “uncovered food in plastic container in walk-in.” 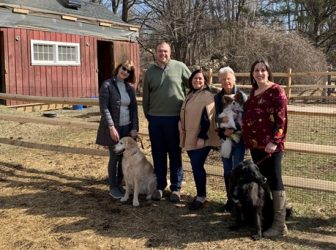 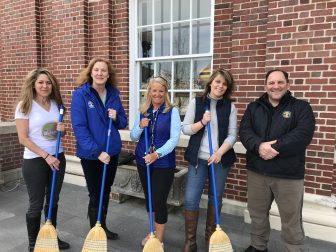 The Clean Your Mile effort is scheduled for the week of April 22 to 28.  More than 250 individual volunteers and members of numerous community organizations will be asked to help give New Canaan its annual spring cleaning to help beautify our Town and environment. Parks, parking lots, schools and public areas will be designated to youth groups and civic organizations. Individuals, families or groups who are willing to clean up roadside trash on their street can email Lola Sweeney, Administrative Assistant at lola.sweeney@newcanaanct.gov or call, 203.594.3089 to sign up for a location and provide a contact email. Organizers include the Town of New Canaan, Departments of Inland Wetlands and Watercourses, Parks, Highway and Public Works, Chamber of Commerce and Planet New Canaan.

Finally, the owners of the commercial building at 136 Elm St. filed a complaint in state Superior Court saying that Hamptonite, a women’s clothing retailer, stopped paying rent in October. The property owner is seeking to evict the business from the bundling.