The Waveny Park Conservancy wants to rename the pond at the foot of the sledding hill ‘Anderson Pond’ after receiving a $350,000 gift toward a restoration project there from the Harlan and Lois Anderson Foundation, according to the organization’s president, Caroline Garrity. The Parks & Recreation Commission on Wednesday voted 9-0 in favor of the naming rights proposal. Sally Campbell, a regular member of the Commission who also sits as vice chairman of the Conservancy, was among those who voted. New Canaan’s highest elected official has said her dual role amounts to an apparent conflict.

Months after a New Canaan Country School neighbor sued the Planning & Zoning Commission over its approval of a new athletic facility, the school purchased that neighbor’s property for $3 million, tax records show. New Canaan Country School has acquired the 8.3-acre property at 579 Frogtown Road, according to a property transfer recorded June 10 in the Town Clerk’s office. It’s located in the two-acre zone. On June 4, the private school applied for a permit to construct the new two-story, 48,000-square-foot facility, which will include basketball and squash courts and will cost about $10 million to build, according to a building permit application. Newtown-based Claris Construction will be the contractor on the job, the application said.

The New Canaan Board of Realtors on June 7 launched a #LiveNewCanaan marketing program to attract homebuyers. It includes this website and is grounded, in part, in the results of a survey of recent homebuyers that showed top schools, a walkable town center, strong sense of community, proximity to New York City and relative value ranked high among reasons they chose to live in New Canaan, according to the Board.

New Canaan High School graduate and former Rams quarterback Michael Angelo Covino, a film actor-writer-director, won the Coup de Coeur at Cannes Film Festival for “The Climb.” The feature film has been picked up by Sony Pictures Classics for distribution.

Police on Tuesday put down a raccoon determined to be sick after multiple sightings downtown. The animal first was seen in the parking lot behind Bank of America in the morning, and then at 2:30 p.m. in the alley next to Mackenzie’s.

The New Canaan Police Department is to undergo an assessment from the Commission on Accreditation for Law Enforcement Agencies, Inc. or ‘CALEA,’ to demonstrate its compliance with numerous professional standards. A CALEA assessment team will take comments from the public during an information session to be held at 6 p.m. on June 25 in the Board Room at Town Hall. 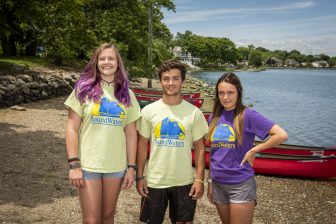 SoundWaters, a Stamford-based environmental education organization, has welcomed three New Canaan High School seniors for its spring internship program. Virginia Smith, Max Findlay and Evelyn Pickering have worked for five weeks at the organization’s Coastal Education Center at Cove Island Park. Under the guidance of SoundWaters professional educators, they’ve been teaching the science of Long Island Sound to elementary and middle school students from schools across the region. They are helping students in a classroom and lab setting, as well as on the beach and in boats on Holly Pond where their young students do their field work.

Police on May 8 issued a $75 ticket for nuisance dog to a New Canaan resident whose bullmastiff had broken through its Colonial Road invisible fence the prior morning and attacked a Havanese walking past. The small dog suffered minor injuries, according to the Animal Control section of the New Canaan Police Department.

The website niche.com has rated New Canaan the 6th-best place to raise a family in Connecticut. Darien, home of the runners-up to the 2018 Turkey Bowl, was ranked 14th. 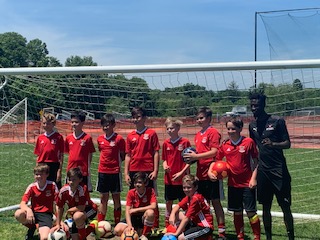 Finally, congratulations to the to the NCFC U12 Boys Black soccer team on ending the season a perfect 8-0. The squad capped a strong season with a 6-1 win against Westport. This write-up from Ashley Prymas:

“Simon Tchakarov led the team with a hat trick when he out-muscled the Westport defense. Leading 3-1 Dylan Ho, Brendan Ma and Tyler Bliel all added goals in the second half adding to Simon’s insurmountable lead. The season was a team effort all the way around. Starting with the back bone of the defense, Donnie “Clean Sheets” West stood out in goal. Holden Prymas and John Murphy anchored the center backs positions while Tyler “Speed Demon” Bliel and Caden “Spirit of the Team” Leslie flanked the wings.  Together, the defense held their opponents to a league leading 10 goals in 8 games. The offense was spirited by Joey DeKlerk‘s long boot, Parker Della Bitta‘s crafty play and Mason Park’s ripping volley’s and sweet crosses. Coupled with wings Mazin Sihweil and George Matviak, the offense scored 38 goals on the season, 15 goals over the closest opponent. Last, but not least, special thanks goes to coach Lamin Janneh who led this rag tag team of scrappers to a well oiled machine.”