The Board of Selectmen on Tuesday voted 3-0 to approve a $14,624.78 sewer tax refund for the owner of 32 Thrush Lane. The property is located more than one mile outside of the sewer district, but had been improperly coded in the town system, so the the owner had paid 14 years’ worth of sewer taxes erroneously, officials said. The homeowner filed a claim related to the overpayment and the town approved the refund based on the town attorney’s advice, officials said.

The case of a New Canaan woman arrested last month following a complaint that she’d accosted another woman and her daughter at CVS was continued Tuesday to Aug. 29 by Judge Stephanie McLaughlin at state Superior Court in Norwalk.

A reminder of three great local events coming up soon:

New Canaan Police on Sunday afternoon arrested a pair of Norwalk men and charged them with possession with intent to sell after finding about one pound of marijuana in their car. An officer stopped the car at about 4:47 p.m. after seeing it had illegally tinted windows while traveling on South Avenue.

The New Canaan Building Department on Wednesday issued a permit for $83,850 of work to be done inside 105 Elm St. to make the commercial space ready for FatFace, a United Kingdom-based clothing and accessories retailer. 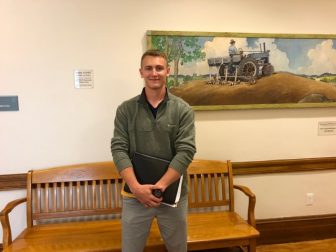 The selectmen on Tuesday voted 3-0 to hire Stephanie Stiles as a part-time employee at Lapham Community Center and to hire Richard “Will” Garbus as a full-time firefighter.

After promoting the individual who had held the position, The Maddox Law Firm LLC on Elm Street downtown is hiring a receptionist/legal assistant. Details here.

A woman who now resides in New Canaan was named as a defendant in a U.S. District Court complaint involving billionaire convicted sex offender Jeffrey Epstein. According to a legal filing, she was among a group of support staff for Epstein who “wittingly and unwittingly” ensured that the financier was supplied with young females for “sexual purposes.” Specifically, the complaint said, she “coordinated schedules between Defendant Epstein and the various young females used for sex; made travel arrangements for the girls; tended to their living needs; and communicated with them in order to maintain their compliance with the rules of behavior imposed upon them by the enterprise.”

Finally, the Building Department on July 31 issued a permit to install solar panels on the town’s Highway Department garage at 394 Main St., an estimated $263,000 job.

[Comments have been disabled on this article]