New Canaan Police at 12:09 a.m. Tuesday cited a 29-year-old New Canaan man with possession of less than .5 ounces of marijuana, possession of drug paraphernalia and speeding after stopping him on Old Stamford Road for traveling 46 mph in a 30 mph zone.

The New Canaan Building Department on Monday issued a demolition permit for a 1967 custom-built home at 1077 Oenoke Ridge. The 3.59-acre property had been purchased three years ago for $2.6 million by a limited liability company controlled by a Stafford Springs family.

Farmer’s Table scored 93 points out of a possible 100 during an unannounced health inspection Wednesday. Mackenzie’s scored a perfect 100 points during a Sept. 11 inspection by a sanitarian with the New Canaan Health Department. 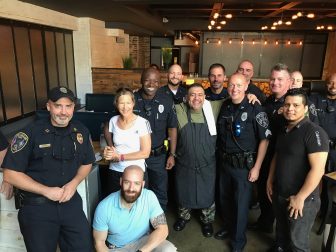 Members of NCPD gathered with residents at Gates on Monday morning for the department’s regular “Coffee with a Cop,” a chance to interact with officers in a casual setting.

New Canaan Country School on Tuesday applied to the town to build a 25-by-75-foot swimming pool with equipment and 2,540-square-foot uncovered patio and pool fence on its campus. The pool is planned for an area next to a barn that the school wants to demolish to make way for a pool house. The Historical Review Committee imposed a 90-day delay on that demolition in the hopes that the barn can be preserved and incorporated in some way into plans for the new structure. The pool construction project that’s planned is to cost about $150,000, the building permit application said, and will be done by Stamford-based Shoreline Pools.

A group calling its website ‘Preserve New Canaan’ has reserved the domain oenokeridge.com (and email address TheOenoke@gmail.com) to push back on a proposed residential retirement housing complex on Oenoke Ridge. The site reads: “We are longtime residents and consistent supporters of the Historical Society, as well as the Waveny LifeCare Network and its charitable mission to care for the elderly in our community. We believe this project is misplaced in this location and will detract from the look and feel of New Canaan. This facility should be situated in a different location as opposed to being crammed into a tiny parcel located on the gateway to town, adjacent to three churches, God’s Acre, and the New Canaan Historical Society.” 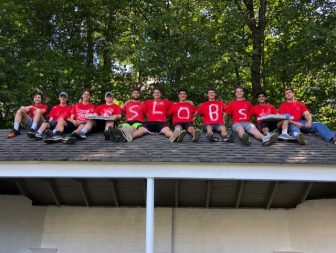 Members of the Service League of Boys or SLOBs spent the day refurbishing the “Lions Den” at Mill Pond. Contributed

On Sept. 22, two dozen members of the Service League of Boys or SLOBs spent the day refurbishing the “Lions Den” three-sided lean-to warming hut structure at Mill Pond. Records show that the Lions Den officially opened on June 11, 1959, as a shelter and warming station for skaters, complete with two fireplaces. 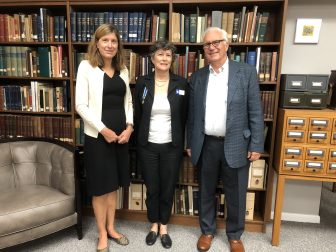 Organizers say an “entertaining and informative evening was held at the New Canaan Historical Society on Sept. 12 titled “The Merritt Parkway: History and Future of a National Treasure.” Wes Haynes, Executive Director of the Merritt Parkway Conservancy presented an in-depth and visual history of the Parkway. “Aesthetics were paramount in the planning and construction of the parkway that opened in 1939 with a speed limit of 45 mph,” a press release said. “With its gently curving road, arching bridges, indigenous plantings and views of Connecticut farmlands, the Merritt consistently remains on the ‘Most Scenic Roads in the USA’ list.”