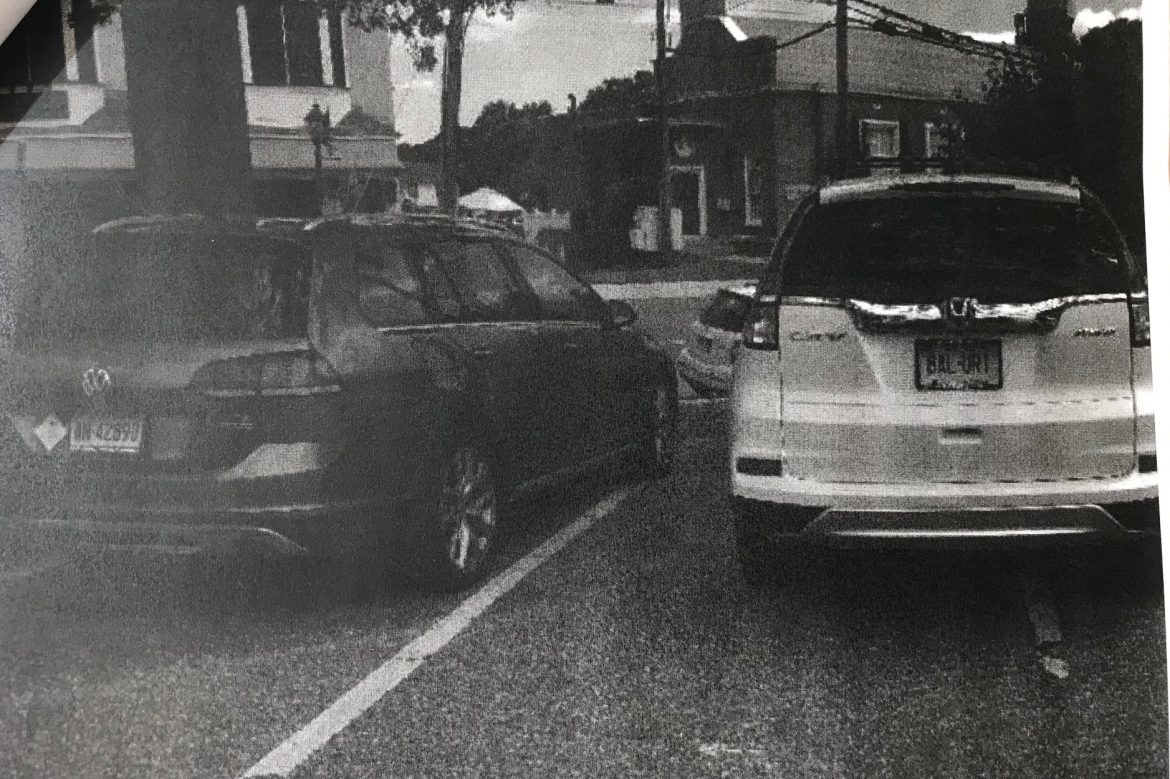 That's her car on the right.

The Parking Commission this month upheld a $30 ticket issued to a woman who obstructed two spaces in Morse Court.

Unable to attend an appeal hearing herself due to a business trip, Fern Ghavidel’s husband, Kambuj Ghavidel, told members of the Commission that the violation was unintentional.

On the afternoon in question, Ghavidel said, his wife arrived at Morse Court for an appointment at a beauty salon. She parked over the line of the space to her right because the car already parked to her left was over the line, preventing her from using the stall, he said.

“It was a chain reaction,” Ghavidel said during the Sept. 4 appeal hearing, held at Town Hall.

“She thought she was doing the right thing,” he added.

Ultimately, the Commission voted 5-0 to uphold the ticket.

Chairman Keith Richey cited Fern Ghavidel’s own appeal in explaining his vote. In her appeal, she said, “[T]he attendant could plainly see that the car parked in Space #4 was parked on an angle necessitating me to the same. My mistake was that the spaces to my right to the end of the parking lot were clear and I parked along side Vehicle #4 because I believed I was doing the courteous thing by parking in the next available space which was apparently incorrect thinking.”

Richey said during the hearing, “I think she convicted herself out of her own appeal.”

Ghavidel said he asked his wife why she didn’t park in one of the other available spaces at Morse Court.

“She said I didn’t see the line, I went next to the guy and I paralleled that,” he said.

Richey said the explanation “kind of undercuts her argument.”

“She had an opportunity to park legally, there was nothing to impede her from parking between lines properly,” he said. “If she had taken the last spot in the series and everyone was off-line, that would be a strong argument.”

Commission Secretary Pam Crum noted that the violation was photographed.

“She parked in two spaces,” Crum said. “She could have parked in the space over one and been legal.”

After the vote, Ghavidel said that he had “one other reason” for coming to the hearing. One of the enforcement officers is “rude” and “is trying to teach people driving lessons” and arguing while writing tickets, he said.

Ghavidel said he’s a resident of north Stamford who has lived in the area for 28 years. Ghavidel said he dines in New Canaan “because I love this town” and prefers not to argue with parking enforcement officers.