The commercial building at 102 Main St. has sold for $1.1 million, according to a property transfer recorded Aug. 28 in the Town Clerk’s office. Located at the corner of East Avenue, tenants include a tailor’s and day spa. The new owner is a limited liability company whose managing principals include a Ponus Ridge man, state records show.

Filling In The Blanks, a nonprofit organization founded by two New Canaan women that provides children in need with meal bags on the weekends, is running its annual Holiday Backpack Drive downtown from Sept. 19 to 26. As part of their meal bag program, every child receives a Holiday Backpack filled with gifts, dental kits, and pancake mix and syrup. This year, Filling in the Blanks plans to distribute 3,200 filled backpacks.  Those who want to support the drive can drop off a new 17-inch backpack and/or purchase a new backpack at Athletic Shoe Factory and Groove—participants will receive 10% off of their total purchase. Supporters can also purchase an item from the Holiday Backpack wishlist at Elm Street Books, The Toy Chest and the New Canaan Toy Store. The New Canaan Chamber of Commerce is also involved in the effort.

Municipal human resources officials confirmed Thursday that the two figures at the center of a lawsuit alleging racist and homomisic verbal abuse in the New Canaan Fire Department—the firefighter who filed the legal action and the captain accused of abuse—both remain employed there. After initially moving to dismiss the suit, the town is in the process of settling, court documents show.

The New Canaan Rotary Club will mark its 35th Lobsterfest with a “contactless” event on Friday and Saturday evenings, Oct. 16 and 17. With a newly expanded menu of lobster, salmon and chicken dinners, meals prepared by New Canaan’s Fjord Fish Market and Walter Stewart’s Market will be available for curbside pickup at the Waveny Pool pavilion to be eaten at home. Dinners are $45 per person ($40 if purchased by Sept. 30) and all funds go toward the club’s annual grants for local nonprofit organizations. Ticket info here.

The position of communications director for New Canaan Public Schools has been eliminated due to budget cuts that took hold this fiscal year, officials say.

New Canaan Police at about 10:47 a.m. Tuesday fined a motorist $450 for passing a school bus at Ponus Ridge and Jelliff Mill Road. 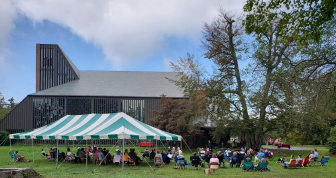 First Presbyterian Church on Sunday held “Rally Day” on its lawn to welcome its new senior pastor, the Rev. Dr. Scott Herr. Here’s a podcast with him.

It’s unclear whether local police will enforce a $100 fine, as allowed by a new order from Gov. Ned Lamont—for those violating a prior order requiring “any person in a public place in Connecticut, whether indoors or outdoors” to “cover their mouth and nose with a mask or cloth face-covering” when within “a safe social distance of approximately six feet from every other person.” The chief of police declined to comment on the matter when reached by NewCanaanite.com. The new order also allows for a $250 fine for those attending large, unsanctioned gatherings and $500 for organizing, hosting or sponsoring such events.

GetAbout announced this week that it has elected William S. Post as its new president and that in the past year it has added four new directors: Sally Campbell, Carolyn Corcoran, Rick Nietsch and Rick Pivirotto.

The Town Council’s committee reports, a roundup from members of the elected body, lasted 51 minutes and 18 seconds during Wednesday’s regular meeting.

Police at 10:30 p.m. Sunday received a report of a cellphone found on South Avenue near the intersection of Farm Road. 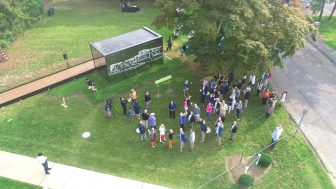 New Canaan Library’s “Mirror House,” located at South Avenue and Maple Street, opened this week for visits by appointment. In it, visitors get an augmented reality tour of the library’s planned new building and green.

Finally, the 23rd Annual Rich-Mich Softball Game will be played at 4 p.m. Sunday at Waveny. The 7-inning game is for men aged 40 to 80 and teams are picked at random. Players will social distance and wear masks when that’s not possible. Bats and balls are provided. There’s no cost or solicitation. The interested should contact Keith Richey at 1keithrichey@gmail.com.