New Canaan’s Shawnee Knight and Tina Kramer had been packing food for needy Stamford kids for some six months before they had a chance to meet, in person, the children and teens they’d been helping. 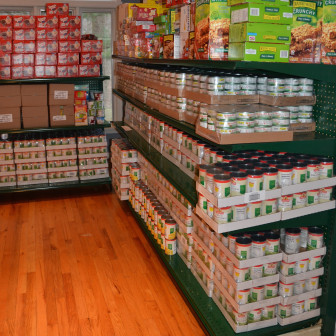 Here’s a room in the home where New Canaan-based Filling in the Blanks, a new nonprofit that’s grown out of Blessings in a Backpack, does its work. It’s operated locally by Shawnee Knight and Tina Kramer. Contributed photo” credit=”

The moment came during a special Christmas delivery. Knight and Kramer the summer prior had developed their model of giving under the national Blessings in a Backpack program. At Christmas, the pair arranged to deliver, themselves, special holiday backpacks for the 100 kids they served at Stamford’s Domus—kids on free or reduced lunch at a school that serves some of the city’s most at-risk youth.

In those backpacks—themselves new and donated—the kids found not just food but also socks, ear buds, candy, nail polish and shampoo for the girls, Skittles, shampoo and conditioner, pancake mix and syrup. 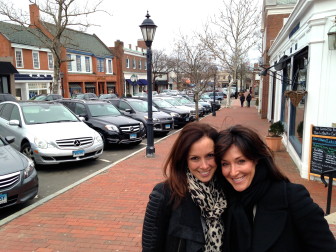 Tina Kramer (L) and Shawnee Knight (R) met in New Canaan as Oenoke Ridge Road neighbors. Last year, they launched a local program of Blessings in a Backpack, which sees weekend packs of food go to kids on reduced or free meal plans at their schools. Now, the pair has created Filling in the Blanks, a new nonprofit that takes that model and extends it through the summer and to more places.” credit=”Michael Dinan / NewCanaanite.com

One boy, about 13, after receiving his gift, approached Knight and Kramer—bearing an unexpected gift of his own.

“He came back in with his bag and said, ‘I don’t need a bag. I have a book bag. Give it to someone who needs it,’ “ Kramer recalled during an interview on a recent afternoon at Dunkin Donuts on Elm Street. “And then he took the candy and gave it to my son and my daughter. And he gave me the pancake mix and said, ‘I don’t think my mom knows how to use this.’ ” 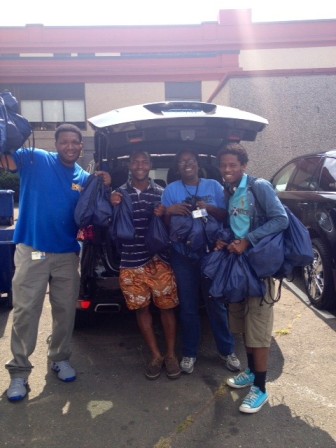 Beneficiaries of New Canaan residents Tina Kramer and Shawnee Knight’s work. While they continue with Blessings in a Backpack for school year-related packed food work, the pair is launching Filling in the Blanks, a new nonprofit that will operate through the summer. Contributed photo” credit=”

It’s a moment that touched both women. Kramer said she felt sad that the Stamford boy thought his mom wouldn’t know how to mix pancake batter.

“But it was so sweet to know that someone that might not have a lot is now giving back to us,” she said.

Which encapsulates much of what the organization that Knight and Kramer just founded—Filling in the Blanks—is all about.

‘I Wanted To Do Something’

Each hailing from a lower middle-class family—Knight from Portland, OR and Kramer from the Briarwood section of Queens, NY—the women both entered the working world at 15 years old (Knight in a bikini shop in Hawaii, where she lived with her dad, and Kramer at a deli in Queens), and eventually would move to New Canaan, mostly because of their husbands’ work (Kramer about 14 years ago, Knight 10). 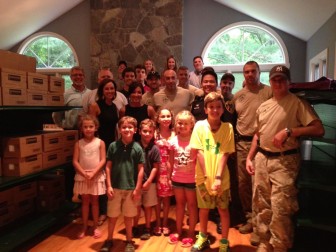 Volunteers assist with New Canaan-based Filling in the Blanks, a new nonprofit that’s grown out of Blessings in a Backpack, operated locally by Shawnee Knight and Tina Kramer. Contributed photo” credit=”

“Where I grew up there was not a lot of money at all,” Kramer recalled. “Not everyone went to college. I went to secretarial school. I didn’t finish college until I moved here. It was always trying to figure your way out of a hole.”

Kramer and her family had resided on Oenoke Ridge Road for about four years when, one day, she went to meet her new next-door neighbor.

As Knight recalls: “When I moved in, she had a new baby and they came over with a plate of cookies. On weekend one.”

The pair became fast friends. As Knight recalled with a laugh: “I think I was the second brunette in town.” 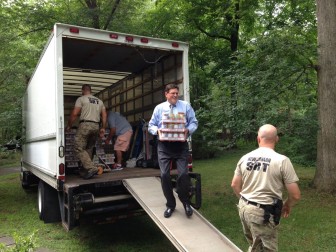 Volunteers assist with New Canaan-based Filling in the Blanks, a new nonprofit that’s grown out of Blessings in a Backpack, operated locally by Shawnee Knight and Tina Kramer. This looks like New Canaan’s own Tom O’Dea (R—125) with the police Special Response Team. Contributed photo” credit=”

Knight is mom to a Saxe Middle School eighth-grader and freshman at New Canaan High School. Kramer has third- and fourth-graders at East School and a senior at St. Luke’s School.

As they raised their families and for different periods of time joined nonprofit group sin New Canaan—such as the Young Women’s League and Newcomers Club—the women also felt the urge to do something a bit different on their own. 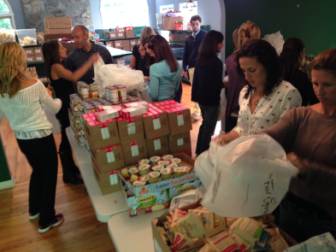 Volunteers assist with New Canaan-based Filling in the Blanks, a new nonprofit that’s grown out of Blessings in a Backpack, operated locally by Shawnee Knight and Tina Kramer. Contributed photo” credit=”

So, they hooked up with a summer camp and created a packed food program on their own, funded entirely by themselves.

The pair has learned a lot about the logistics of the program—including the sheer amount of food they need—since that very early-going.

“For the summer camp, we thought, ‘No big deal, we’ll go grocery shopping,’ ” Knight recalled with a smile. “We walk into the grocery store with two carts, like idiots. And we’re like, ‘Four hundred cans is actually not going to fit into that cart. What are we going to do?’ ”

What they’ve done is astounding.

Raising $30,000 at their own fundraiser last June, then working with the Cingari family to get a discount at a ShopRite Grade A at Newfield Green for their super-sized orders, Knight and Kramer have evolved this local Blessings in a Backpack into an inclusive community organization that sees kids from several different groups—such as the Brownies, New Canaan High School Service League of Boys (or “SLOBs”), church youth groups, Darien youth hockey, New Canaan youth football—give of their time on weekends to pack food. East, West and South Schools held a week-long food drive that produced 7,000 items for the cause.

“Every other weekend we pack 300 bags and we wanted the kids in the community to come pack with us, so they knew what was going on around them and where this was going,” Kramer said. They pack at a home the Kramers own (the family now lives on North Wilton Road).

Here’s how Knight describes the impetus for the larger effort: “I think the main thing is that it’s a crime for kids not to have food and it’s not their fault. If their parents are in a situation where they can’t provide for their kids, someone has to break that cycle. And that’s a good place to start. It’s the kids that are going to lead our communities and our neighborhoods in the future, and just getting them off with the right foods so they think and perform better, it will make a better generation of people.”

The women drive the packed bags themselves to Domus, where a program coordinator there takes them over for distribution.

Thanks to a connection through a friend, New Canaan Police Lt. Jason Ferraro, they get huge support from the department’s Special Response Team, too: Officers have helped them drive and unload the truckloads of food they collect (Knight and Kramer get six months’ worth of non-perishables at a time, so it’s been two mammoth loads so far).

The Cingaris agreed to rent a truck for Knight and Kramer, “and we didn’t have to drive—thankfully, because that would’ve been like Laverne and Shirley getting stuck under one of the underpasses,” Knight said.

‘Filling in the Blanks’

While Knight and Kramer are under a three-year commitment with Blessings in a Backpack, they also are moving quickly to provide a stopgap for times when that national program isn’t operating, such as during the summer. 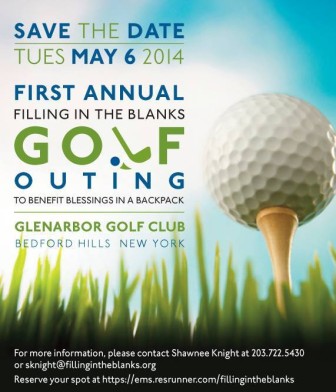 Filling in the Blanks will hold its first fundraiser, a golf outing, on May 6.” credit=”

Enter the new organization the women recently founded, applying last month with the IRS for 501(c)(3) nonprofit status: Filling in the Blanks.

“We want to do a summer program similar to the program we do now during the school year,” Kramer said. A member organization of the New Canaan Chamber of Commerce, Filling in the Blanks additionally will serve 50 children on free lunch programs at Bedford Hills Elementary in northern Westchester, New York (where Ferraro’s wife works as a teacher).

Knight and Kramer already been awarded the Young Women’s League of New Canaan’s “Rookie of the Year” award—and could garner up to $10,000 for that, depending on how much is raised at the league’s May 9 Couture for a Cause Fashion Show.

They’ve also nearly sold out the foursomes at their own fundraiser—the First Annual Filling in the Blanks Golf Outing—scheduled for May 6 at Glenarbor Golf Club in Bedford Hills, NY. It’ll include a silent auction as well as fundraising games on the course, the women said.

It’ll take about six to nine months for the government to approve their organization’s nonprofit status, they said, and in the meantime they’ll continue to work under the Blessings in a Backpack banner for the school year program.

“I don’t know how anybody could not help kids,” Knight said. “They’re innocent in everything.”