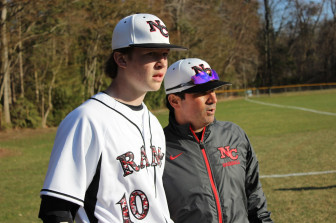 Almost one year ago to the day, Tommy John surgery put an end to Rajkowski’s junior season, forcing the flame-throwing righthander to the bench during the Rams’ storybook 2013 state title run, and clouding the pitcher’s baseball future.

“When I found out that I had to have Tommy John surgery, it was heartbreaking,” Rajkowski told NewCanaanite.com. “I just thought to myself if I ever come back out I’ll make it the best year of my life.”

He’s off to a good start. 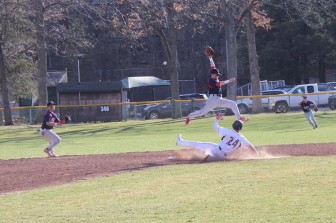 Rajkowski made a triumphant return to the Mead Park diamond Wednesday night, driving in the first two runs of the game with a booming triple off the tree in right center and–perhaps more importantly–closing out the game with a scoreless 7th inning on the mound, as the Rams began their title defense with an 9-0 win over New Fairfield. 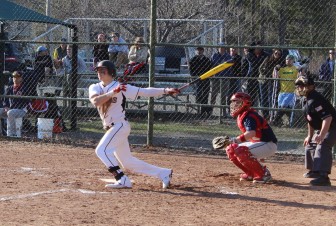 As they did so many times in 2013, the Rams wasted no time jumping out to an early lead. With one out, junior Alex LaPolice was hit by a pitch and promptly stole second. After senior captain Matt Toth reached on an error, up stepped Rajkowski with two men in scoring position.

“Men on second and third is a great situation,” Rajkowski said. “Hitting a first-pitch fastball off the tree, it was a great confidence booster and a great way to get team morale up in the first inning.”

After his 2-RBI triple, Rajkowski would come in to score on senior captain Erik Jager’s single, extending New Canaan’s lead to 3-0. 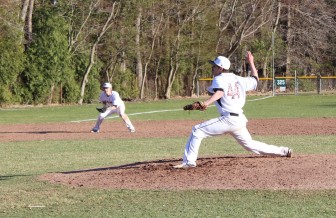 Junior pitcher David Giusti – making his second consecutive season-opening start – was brilliant on the mound, taking a no-hitter into the 5th inning.

“I was feeling good. I was hitting my spots, which I always like and I got a few strikeouts along the way, which is always good,” Giusti said. “So whatever I could do, I was doing it.” 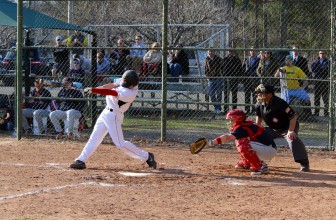 The Rams broke the game open in the bottom of the 5th, scoring 5 runs. The big blows came from the bottom of the order as #7 hitter, junior Brandon Abate laced a 2-run triple to right, and #9 hitter, senior Max Wilson’s drilled a 2-run double to left center.

“The bottom came up big,” said New Canaan head coach Mitch Hoffman. “Wilson was hitting the ball hard, Kane Curtin hit the ball, Brandon Abate hit the ball hard…the top did fine, but what we just talked about was don’t try to do too much yourself. Other guys will pick each other up, because not everybody is going to hit on the same day.” 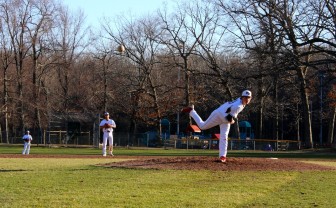 Dan Rajkowski fires in a pitch.

New Canaan tacked on one more run the 6th inning as Victor Lu ripped an RBI double to left, giving the Rams a 9-0 lead. Giusti pitched shutout ball through the 6th inning, giving up 3 hits and striking out 6 before giving way to Rajkowski, who worked through an error and two hit-by-pitches to close the door on the Rebels and preserve the shutout. 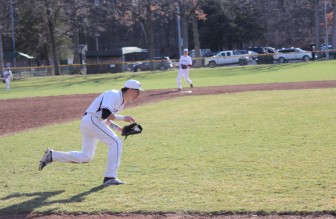 Erik Jager makes the play at 3B.

“I had a lot of adrenaline…nerves and adrenaline mixed together,” Rajkowski said. “I was excited overall to get back out there and get my first inning under my belt. Hopefully from here on, it’s going to be a great season.”