Two more buildings at The Vue—the apartment and condo complex formerly known as Merritt Village—are on track to get their Certificates of Occupancy in the first week of June, according to a March activity report that the fire marshal presented Tuesday to the Fire Commission. Buildings C and D are located at 160 and 180 Park Street, respectively, according to Fire Marshal Paul Payne’s report.

A 2021 Range Rover, its keys left inside the vehicle, was reported stolen from a Jelliff Mill Road driveway at 10:12 a.m. Wednesday, according to New Canaan Police. The SUV last was seen parked there at about 10 p.m. the night before, Chief Leon Krolikowski said in a press release, and had not been recovered as of Wednesday afternoon. 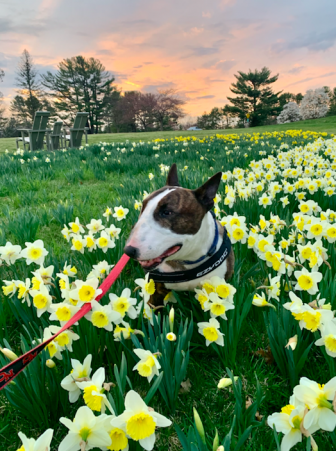 The daffodils are blooming at Irwin Park, visited April 9 by Weed Street resident Duke Radman. He’s recovering from heart issues and has a newly installed pacemaker. “We are very, very thankful that he is still with us,” mom Stephanie Radman said. “We always take time to stop and smell the flowers.”

The Town Clerk’s office on Tuesday received a notice of intention to petition the Town Council’s decision to reject a motion that would have reduced the Board of Education’s operating budget next fiscal year by about $460,000. Designed to forestall changes to school start times (which come with higher busing costs), the motion failed by a 2-10 vote during the legislative body’s March 31 meeting. Councilmen Mike Mauro and Maria Naughton voted in favor and Councilmen John Engel, Rich Townsend, Sven Englund, Steve Karl, Penny Young, Liz Donovan, Cristina A. Ross, Mark Grzymski, Tom Butterworth and Robin Bates-Mason voted against. The petitioners have until May 7 to collect and submit the qualifying number of signatures required (682) to force a referendum vote on the matter. 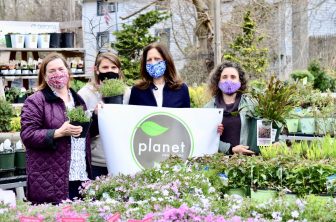 Baldanza has terminated its lease for 21 Forest St., according to the fire marshal.

Local nonprofit Staying Put in New Canaan is marking Friday as National Healthcare Decisions Day by urging residents to talk to their loved ones about end-of-life care. Staying Put issued these tips:

According to new data from the Connecticut Department of Public Health, the average daily rate of COVID-19 cases per 100,000 in New Canaan for the most recent reporting period is 31.1, compared to 28 for Wilton, 22.4 for Westport and 22.3 for Ridgefield.

Bankwell on March 29 began occupying its new headquarters at 258 Elm St., the former Unimin building, the fire marshal said in his report.

Finally, the Town Clerk’s office on April 7 recorded the sale of 93 Harrison Ave. for $2,225,000 and the buyer is a Connecticut company called “Chocolate Souffle LLC.” The company is registered to residents of Garibaldi Lane, according to Connecticut Secretary of the State records.