Parks officials this week voted to recommend that a proposed seasonal outdoor ice rink be located in Waveny. 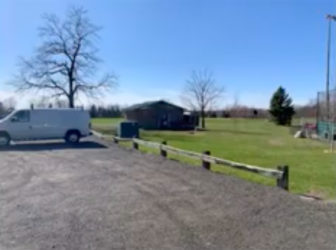 The parking lot that serves the Orchard Field at Waveny can be entered by traffic coming into the park from South Avenue on the right after climbing the hill on the main road. Parks & Rec photo

Based on the findings of a subcommittee, the Parks & Recreation Commission voted 10-0 in favor of trying out a winter “mini rink” in the parking lot that serves the Orchard Field softball diamonds.

One commissioner abstained from voting during the April 14 meeting, held via videoconference.

It’s a large area that’s “also good because you have the grass fields behind it,” Granito said.

“The bathrooms are right there. There’s still plenty of parking. We can bring in food trucks—that would just be an easier option than getting a shed and pulling a permit and dealing with the Health Department. This is a great area. We think that this is a good location. The power is already there. The water is there and the bathrooms are there.”

Goodman more than two years ago took a lead on information-gathering for the proposed ice rink and in July 2019 reported back that several possible sites had been eliminated for practical reasons while Kiwanis Park emerged as a strong contender. He was part of a group of town officials and community volunteers who went so far as to focus on identifying a place within Kiwanis for the rink itself.

Yet when plans were aired at public meetings, several neighbors of the Old Norwalk Road park, among others, raised concerns, such as noise, lighting, traffic, activity and effect on property values. Goodman has continued to advocate for Kiwanis as a location, along with New Canaan’s Tom O’Dea, who has helped lead private fundraising efforts for an open-air ice rink. Both addressed the subcommittee at a meeting Monday dedicated to discussing possible locations.

Siegel thanked O’Dea and Goodman for all the work they’ve done so far saying it will help go toward putting “permanent ice rink in our town for all to enjoy.”

The rink will be “just one more benefit to Waveny Park,” Siegel said.

“And I think continuing to sell the community on how an ice rink could really benefit the residents is a no-brainer,” she said.

In order for the Orchard Lot to work it will need to be leveled out and Public Works officials have talked to a paving contractor and “did not see an issue with it,” Granito said.

Commissioners and guests at the meeting asked whether wind was a concern (no), what hours the rink would run (that’s to be decided), whether lighting would be required (yes), whether projected costs have been detailed yet (no) and whether the site would accommodate a full-size rink if the town wanted to scale up in the future (no).

Segalas said she asked about the hours because Waveny is a “sundown park.”

“People are supposed to be out of there after dark,” she said. “So I guess the rule is going to change somewhat for this, or what?”

“We already have lights on the the girls’ softball field, we have lights at the paddle tennis courts, we have events at Waveny House that go to 11 o’clock at night,” he said. “So that sunrise-sunset only pertains to walking the trails.”