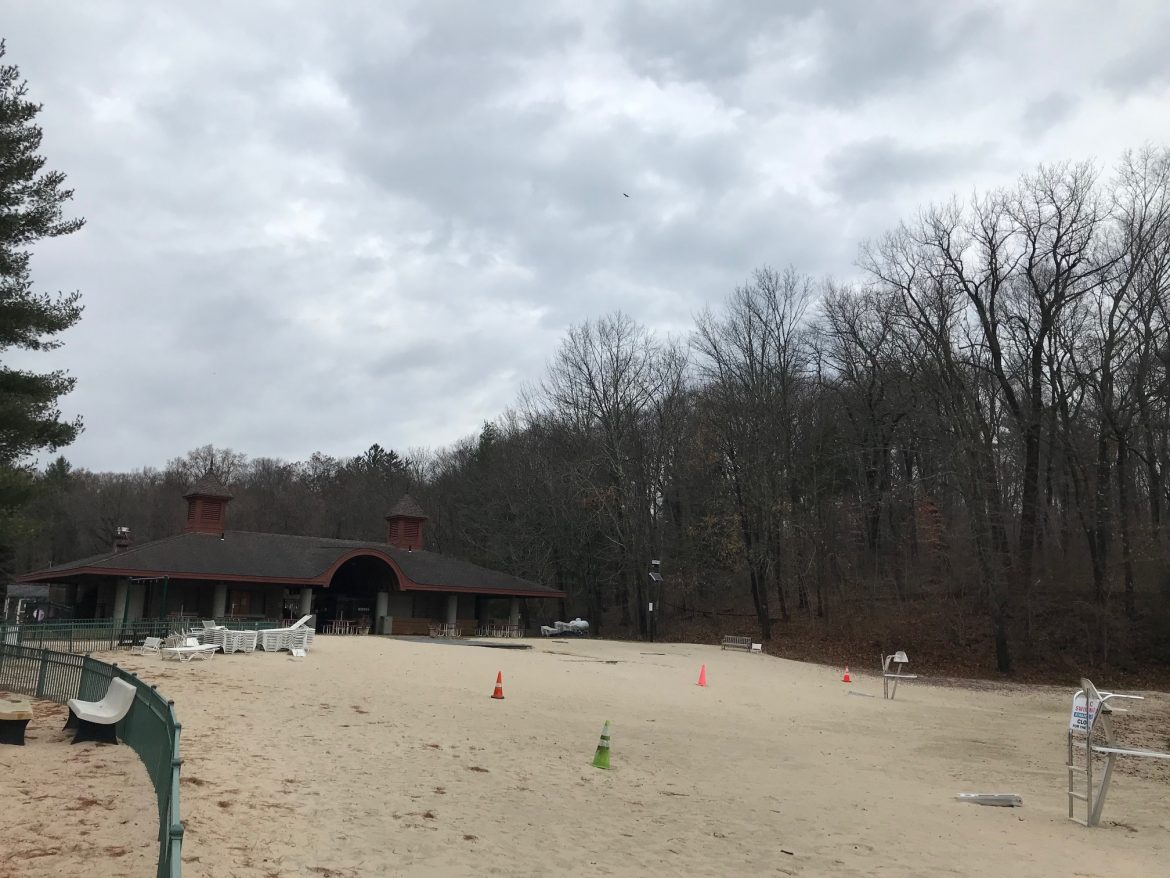 Town officials said Tuesday they’re trying to identify just where in Kiwanis Park would be the best place for a proposed open-air ice rink.

A leading contender for a seasonal rink site in New Canaan that would be open to the public with an admission charge, Kiwanis is attractive in that it has sufficiently large areas, parking, access to bathrooms, running water and electricity, and structures that could house changing areas, snack bar and skate shop, members of the Parks & Recreation Commission have said. 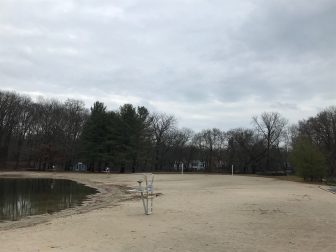 Officials are looking at whether the area below the swimming hole at Kiwanis could be a viable site for a seasonal open-air ice rink. Credit: Michael Dinan

Yet a level area out front of the main pavilion traditionally has been used by a local service organization for a large chunk of the late-November-through-February trial season that Parks & Rec has floated.

And early cost estimates to level out an area behind the pavilion and install a retaining wall there appear cost-prohibitive, a group of town officials and community volunteers said during a meeting of a Parks & Rec subcommittee.

It’s also unclear whether installing the ice rink deeper into the park—on the far side of the swimming hole—would create a sufficiently attractive and workable facility, officials said during the Parks & Rec skating subcommittee meeting.

While excavation, fill, retaining wall construction and other costs would push the total expense for an ice rink located between the rear of the pavilion and swimming hole to an estimated $200,000 to $250,000, creating a facility out front of the building, where the Exchange Club of New Canaan in past years has set up its approximately month-long Christmas tree sale would be far less money, official said.

Rona Siegel, chair of Parks & Rec, asked whether the club had ever looked at setting up its sale in the Waveny Pool parking lot instead.

“It’s ideal,” Siegel said at the meeting, held in a conference room at Town Hall. “It’s screened with trees. Its’ just a huge lot, not used: You drive in, you drive out either the front or the back. To me—not that I am speaking for Exchange Club—but if this is our roadblock of $200,000 versus the town potentially approving a $75,000 rink and us getting a nice rink?”

Though Goodman noted that the Parks & Rec subcommittee and Exchange Club “have not come up with a plan of how to co-share,” others at the meeting said it would be best all-around if the two activities—picking up a Christmas tree and ice skating—could be offered together.

Karl said Exchange Club leaders he’s talked to have been “excited to figure out a way to make this work, because there is a lot of synergy there.”

“It’s amazing, you picture that rink with a big lit Christmas tree and bringing kids there with cocoa, it is just another dimension where that Christmas tree sale, I think it would blow up,” he said.

Goodman took a lead on information-gathering for the proposed ice rink following a Parks & Rec meeting in January, and in July reported back that several possible sites had been eliminated for practical reasons while Kiwanis emerged as a strong contender.

Goodman said that Moynihan asked him to investigate areas behind the pavilion.

Told that a quick estimate from the Department of Public Works came in at about $230,000, Moynihan indicated that the figure was prohibitively high, saying, “It’s a lot of money in a year that we are not going to be looking to [unintelligible] any kind of capital.”

Benko said an area south of the swimming hole, near a single-story town-owned structure that recently became vacant, would be far less expensive to develop because it’s already flat. Yet downsides of the area are that it’s at such a distance from the park’s largest parking areas as well as the main pavilion itself, which Goodman and others envisioned as a building that could be winterized and heated for use by parents watching their kids skating. Also, there are also limits to the main pavilion building, Benko said—for example, it’s a non-insulated concrete block structure.

If the rink were built off of the rear of the pavilion, it also could be converted during the summertime for new uses, such as a sundeck or kiddie pool-play area with fountains, similar to the one at Waveny Pool, meeting attendees said.

Preliminary discussions with Inland Wetlands and Planning & Zoning officials indicate that there would be no regulatory roadblocks to creating the ice rink directly behind the pavilion at Kiwanis, so long as rules regarding limits on noise and light are observed, Goodman said.

Some pieces of the $200,000-plus estimate appear flexible—for example, Goodman said, if the width of a proposed 40-foot deck extending out from the pavilion were halved that would save about $20,000, and using a pre-engineered concrete retaining wall could save another $25,000.

Those in attendance discussed how other towns operate their own rinks, the need to find adequate storage for all of the equipment that a pop-up ice rink would require, the upside of seeing Kiwanis Park used for a larger portion of the year and about other areas in the park that the Exchange Club might run its tree sale, though the operation requires ample space for pickup and turning.

They also talked about the impact on neighbors of the various sites within Kiwanis.

Murphy said, “I get it, there are always going to be neighbors—it seems, though, that is a perfect place for something like this. I like the idea of outdoor spaces, I love the fact that it is multigenerational. We are not just talking children. There are a lot of adults that love to skate and would come out on a Tuesday at 11 just like they do with paddle tennis and all of the above. The stumbling block is really going to be the cost of getting this set up in the perfect location and who pays that.”

In terms of coming to the municipal funding bodies for money during the budget season, Karl noted that a far smaller project to get a fifth platform tennis court at Waveny took several years to win approval, even though there was substantial private funding behind it. Karl added that it’s still a good idea to present all of the research and findings already in hand, along with cost estimates.

Goodman said that further study was needed for the area south of the swimming hole, and that he would make preliminary inquiries of P&Z and Inland Wetlands staff about the site.

Siegel said the proposed ice rink could bring much to New Canaan that locals now must travel outside of town to find.

“We are missing skating,” she said. “We should have an ice rink. We should not have to drive to Darien to skate. We really shouldn’t.”