The New Canaan Building Department on April 21 received an application to demolish the 9,000-square-foot home at 84 Turtle Back Road.

Police say they’ve identified the driver who struck a cyclist on Route 123 in New Canaan on Wednesday. Read the update here. 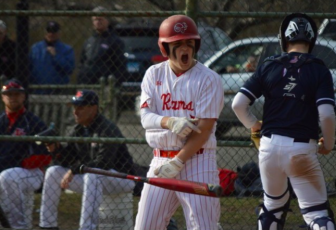 Congratulations to Zack Ramppen on being named last week’s “Ram of the Week” by the New Canaan High School Athletic Department. He led the NCHS varsity baseball team in RBIs (7), is tied for runs scored (5), and is second on the team in batting average (.500), according to a citation. Coach Anthony Bloss said in a press release, “Zack leads He is a leader on and off the field. He has led defensively, manages our pitching staff very well, and is, without a doubt, our field manager. Zack brings an intensity and positive energy that helps our players during both good and bad portions of a game. All members of the team look to him during important stages of the game.” The Ram of the Week’s sponsors include Walter Stewart’s Market and Rwambuya-Harrow at William Raveis Real Estate.

New Canaan High School has been ranked No. 5 in the state by U.S. News & World Report.

The owners of 2 Wing Road on Wednesday filed a complaint in state Superior Court challenging an October tax assessment and decision in March by the New Canaan Board of Assessment Appeals to forgo a hearing on their appeal.

Dr. John A. Kerchoff, New Canaan family dentist for 47 years has retired and announced that Dr. Mark DeWaele and Dr. Spencer Meyers, of 208 South Ave., will continue his practice, with Cindy Gramling, Kerchoff’s hygienist transferring to their practice. (Patients may begin scheduling appointments at 203-966-5944.) 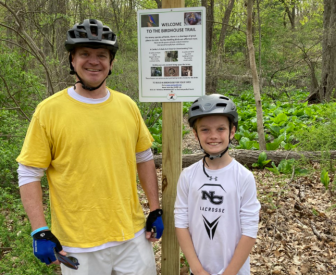 Jeep and Carter Post helped install the new “Birdhouse Trail” in Bristow Bird Sanctuary and Wildwood Preserve last weekend. The exhibit displays 14 different birdhouses and information about birds that nest in the area. The exhibit, supported by the Stuart Higley Foundation, meets the Conservation Commission and Bristow Park mission of educating the general public about bird life and biodiversity in our Town. The official opening of the birdhouse trail will be May 2.

First Selectman Kevin Moynihan said during the April 20 meeting of the Board of Selectmen, “We had been trying to make this a hybrid at least for today, but Channel 79 and our IT Department weren’t ready, so in two weeks I expect we will have an in-person meeting or more likely, a hybrid meeting.” The Board’s next meeting is scheduled for Tuesday. 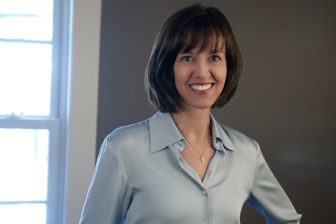 Margaret Riley has been hired as the executive director of the New Canaan YMCA. Contributed photo

New Canaan resident Margaret Riley has been hired as the new executive director of the New Canaan YMCA, succeeding Craig Panzano in the position. “I am extremely excited and grateful for this opportunity to join the talented and dedicated staff of our Y,” Riley said in a press release. “I had the pleasure of serving as a Board member for two years and look forward to serving the Y and our community in this new role.” A graduate of Providence College, where she double-majored in Italian and Business, Riley went on to St. John’s University School of Law, and has practiced at Darien-based Carta, McAlister, & Moore since 2013. Past volunteer roles include president of the South School PTC, editor of the New Canaan High School PFA newsletter, grant review team member with the New Canaan Community Foundation and religious education instructor. On the YMCA board, she chaired the Post-COVID Reopening Task Force.

Before and after photos at the Gold Star Walk in Mead Park from June 2017 and April 2021. Photos from Catherine Gorey and Michael Dinan

Quick follow-up on this week’s article about the Gold Star Walk in Mead Park, the before-and-after photos at left show how much the area has been improved in four years thanks to the Department of Public Works and many volunteers.

The New Canaan Chamber of Commerce in a “Save The Date” Instagram post said this summer’s Sidewalk Sale will be held July 17.

According to the newest data from the state Department of Public Health, New Canaan’s average daily rate of COVID-19 infections per 100,000 population during the most recent report period stands at 23, compared to 20.4 for Darien, 18.6 for Wilton, 16.3 for Ridgefield and 20.6 for Westport.

Moynihan during the April 20 selectmen meeting noted that the agenda didn’t have names in parentheses of who was presenting the various items to the Board, as it usually does. Addressing Administrative Officer Tucker Murphy, he said, “Tucker, why don’t I have, parenthetically, who is covering these today?”

Finally, here are some upcoming events worth putting on the calendar: