Police are investigating the theft of a backpack that was reported stolen from St. Aloysius School around 11:21 a.m. on Oct. 8. 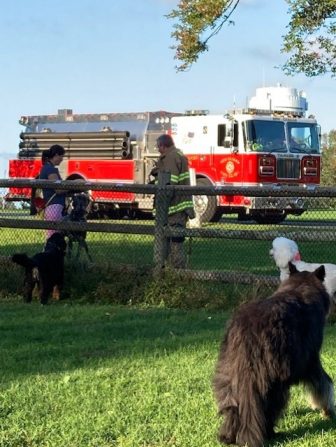 Firefighters at about 5 p.m. Monday responded to a leak in the water supply at Spencer’s Run dog park in Waveny. Dogs played in the puddle that formed there before the problem was addressed.

First Selectman Kevin Moynihan said during Tuesday’s Board of Finance meeting that he received a notarized copy of the town’s Memorandum of Understanding with New Canaan Library signed Oct. 11, at that point only requiring his own signature. “I will sign the MOU,” Moynihan said. The document outlines the terms of New Canaan’s $10 million grant to the library for its building project. Regarding the building permit for the project, Public Works Director Tiger Mann said at the meeting, “Every department has finished their initial review. We are waiting for some comments back and then we will be able to move forward at that point.”

A reminder that New Canaan artist Hans Neleman‘s show, “Beauty is Truth” opens with a reception to be held 6 to 9 p.m. Saturday at Jean Jacobs Gallery at 84 Main St. Featuring assemblages, collages, paintings and photographs, the show is curated by town resident Eleanor Flatow.

The New Canaan Building Department on Tuesday received an application to demolish a 1954-built house at 831 Carter St. 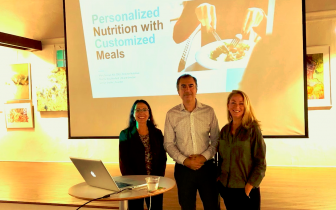 The Dil Figaro team at its Oct. 5 tasting event at the Carriage Barn Arts Center. contributed

Dil Figaro introduced itself to the community with a tastings event held Oct. 5 at the Carriage Barn Arts Center. Dil Figaro is a personalized nutrition company whose dietitians help customize healthy meals from local restaurants to become “health-fit and taste-matched for its clients,” the company said in a press release. “These meals are delivered fresh, saving stress and time on meal preparation.”

New Canaan Police at about 5:04 p.m. on Oct. 9 received shotgun shells turned in from a Benedict Hill Road residence.

Book it: The next New Canaan Chamber Music concerts are coming up, at 4 p.m. and 7 p.m. on Friday, Oct. 29. They will be held at First Presbyterian Church and will feature Andrew Armstrong on piano and James Ehnes on violin. More info here. 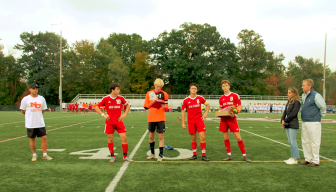 New Canaan High School boys varsity soccer captains Milan Afshar, Tommy Kurz, Michael Norton and Alex Wolter took the mic at halftime during Wednesday’s “Rivals Cup” game versus Darien to remember their beloved friend and classmate Kaleigh Griffiths who died in 2019.“Every year the NCHS boys soccer team selects an organization to support,” Wolter said during the halftime address. “This year we chose to remember our friend and classmate Kaleigh Griffiths, her fight with cancer, and the organization that made her journey a little bit easier.” Kurz said, “Friends of Karen was very supportive of our friend Kaleigh and her family. And for that we are grateful. We are proud to be able to provide funds that allow them to continue their work with families along their journey.” (The game ended in a 1-1 tie.)

Caffeine & Carburetors will be held starting at 8 a.m. Sunday in Waveny. 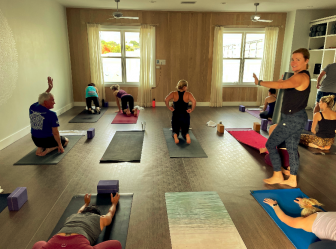 Inside Kaia Yoga on Park Street during the first-ever “Yogis Support Our VFW Day” on Oct. 11. John McLane, a U.S. Army captain in Vietnam, can be seen waving his hand. Photo courtesy of Margaret Roscoe

The inaugural “Yogis Support Our VFW Day” on Oct. 11 raised 1,210 for the local Post 653. The next event will be held in May, leading up to Memorial Day.

Wednesday’s regular meeting of the Parks & Recreation Commission was the last for longtime member Laura Costigan. “We will miss you,” Chair Rona Siegel told her. “Thank you for your many years.”

Costigan said, “Every time I was through town, I notice everything that is going on and I am going to miss being part of this group, I really will.”

The town will honor longtime Planning & Zoning Commissioner Laszlo Papp by dedicating a bench in his name in the Mead Park plaza along Richmond Hill Road at the end of Grove Street at 12 p.m. Friday.

A motorist was cited for passing a school bus on South Avenue following a report made to police at 4:39 p.m. on Oct. 6. 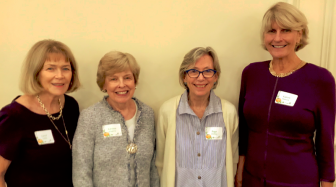 The New Canaan Beautification League held its annual Members Fall Luncheon on Wednesday at Woodway. Gardener and author Page Dickey talked about her new book, “Uprooted: A Gardener Reflects on Beginning Again” which is available at Elm Street Books.

NewCanaanite.com‘s 10 “0684-Radi0” podcasts with Board of Education candidates have had more than 2,500 total downloads since the interview series launched in August.

Charles Salmans will speak during Friday’s meeting of the New Canaan Men’s Club on the Ford Motor Company’s role building the B-24 Bomber plane. The Men’s Club meets Fridays at St. Mark’s Episcopal Church at 10 a.m., with the speaker’s presentation beginning shortly after 10:30 a.m.

A wallet found in Waveny around 2 p.m. on Oct. 11 was turned in to police and placed in property management, as were car keys found in the park on the evening of Oct. 9. 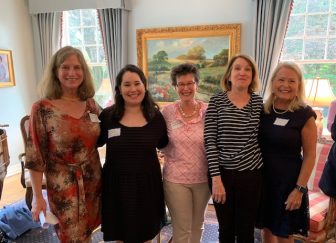 P.E.O. Scholar Award recipient Paola Odriozola spoke at Chapter N’s meeting last week. She is a doctorate degree candidate in psychology (with a neuroscience concentration) at Yale University. Her research interest is related to how we can better use our knowledge of brain development to optimize treatment for anxiety in teenagers. The typical approach used in adults does not work sufficiently for teens, partly because their brains, including the prefrontal cortex, are still developing, Odriozola said. She is researching techniques that might target alternative brain regions and thus may be a better fit for developing brains. The P.E.O. Sisterhood is a philanthropic educational organization dedicated to supporting higher education for women.

New Canaan Police at about 6:01 p.m. Sunday arrested a 68-year-old East Avenue man by warrant and charged him with second-degree failure to appear. He had been charged by Norwalk Police with fifth-degree larceny in 2017, court records show.

Police are investigating the theft of packages from a mailbox on Silvermine Road reported at 9:27 p.m on Oct. 6. 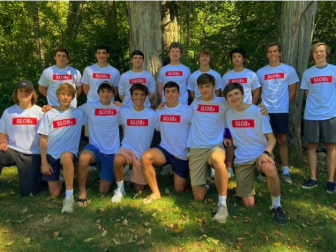 Finally, an announcement that membership is open for the New Canaan High School’s Service League of Boys or “SLOBs,” a philanthropic club for sons and parents to initiate and promote educational and charitable endeavors. Members currently serve over 30 philanthropic organizations with over 70 different events each school year. SLOBs is the largest service club at NCHS and has served the community with more than 32,000 volunteer hours.