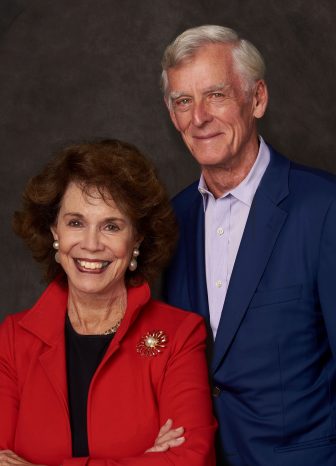 New Canaan Library announced Friday that longtime residents Jim and Dede Bartlett donated $3 million toward the library’s capital campaign. They’ve been “our partners from the beginning, offering their strong encouragement and support throughout,” Ellen Sullivan Crovatto, CEO of the capital campaign, said in a press release. “Their incredible generosity accompanies an exemplary and unwavering fidelity to culture and civic life in New Canaan. The Jim and Dede Bartlett Auditorium will forever honor their exceptional leadership. We are so grateful for the tangible momentum it gives the capital campaign just as our new fundraising effort has begun.” In addition to the naming of the auditorium, the library will launch a new annual lecture series named for Dede Bartlett to honor women in leadership, the press release said.

New Canaan Police are investigating a complaint of a purse stolen reported stolen at about 11:59 a.m. Sunday from an unlocked vehicle parked at Waveny.

The Board of Selectmen on Tuesday voted 3-0 to approve the appointment of Paul Knag to an alternate seat on the Planning & Zoning Commission.

Very proud of our 2019 NCHS senior intern Olivia Flaherty-Lovy and the path she’s taking in college:

A post shared by School of General Studies (@columbiags)

The town is seeing an uptick in new COVID-19 virus cases, First Selectman Kevin Moynihan said during Tuesday’s meeting. The town already had 14 cases this week alone, he said, “so we are going in the wrong direction.” Moynihan continued, “I am very concerned. People act as though the pandemic is over.”

Police are investigating a report of mail illegally removed from a mailbox on Stonehenge Drive, lodged at 4:39 p.m. Tuesday.

Here are some noteworthy events that are coming up:

The @MFIAclinic is defending local news site the @NewCanaanite in a defamation suit because “Small local news outlets shouldn’t have to choose between foregoing their reporting on controversial issues and facing meritless lawsuits that can break the bank.”https://t.co/MOd9GuMqxc

Staying Put in New Canaan is looking for part-time volunteers:

The selectmen ended up not voting on the “Review and possible action to approve the acquisition of 220 Elm Street” during their meeting Tuesday. The Board met in executive session to discuss the matter. P&Z this week voted in favor of the town’s acquisition of the building there, as required by state law.

***
Finally, on Nov. 27, a number of community groups in New Canaan will place wreaths on graves in honor of New Canaan’s veterans. The annual effort is organized by the VFW and covers all of the known veterans in New Canaan’s public and private cemeteries. The effort is supported financially by the Exchange Club, which provides the wreaths at cost, money raised from poppy sales over Memorial Day weekend and private donations. If you know of a recently deceased veteran buried in New Canaan or if you would like to contribute to the annual cost of purchasing 1,200 wreaths and bows, please contact Mike McGlinn at 203-962-1302 or email at Michael@mcglinnins.com.