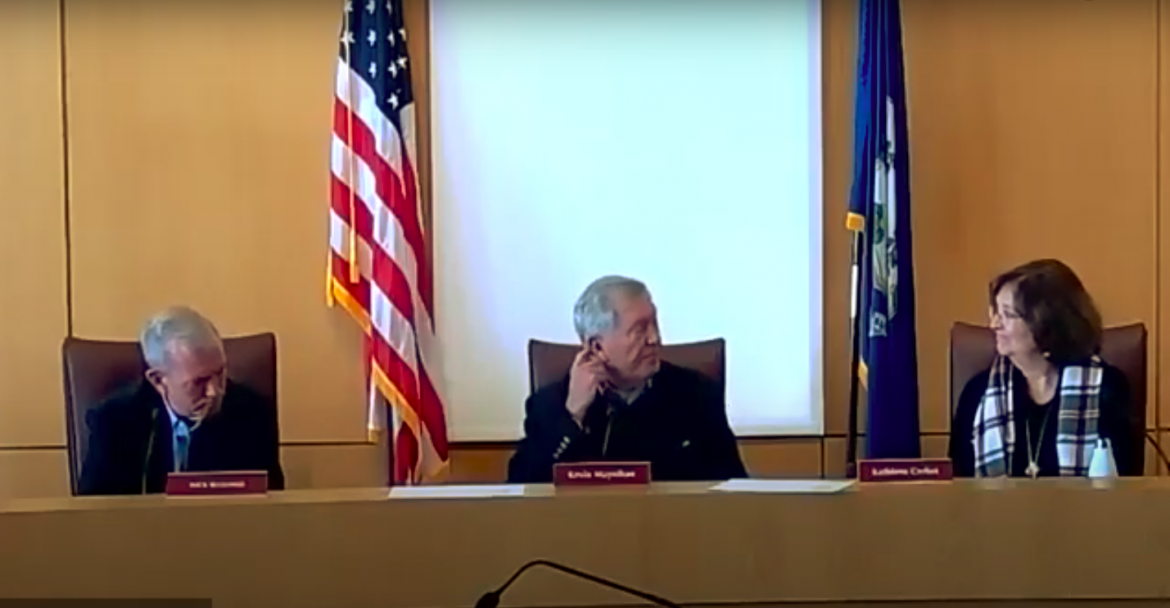 The Board of Selectmen at the Nov. 16, 2021 meeting in Town Hall, L-R: Nick Williams, Kevin Moynihan and Kathleen Corbet. Zoom screenshot

New Canaan’s highest elected official is pushing back on a request from a fellow member of the Board of Selectmen to move a meeting next month back by one day.

First Selectman Kevin Moynihan said Tuesday that “it would be a very bad precedent” to honor such requests.

“We know when our meetings are scheduled and we have to be here,” Moynihan told Selectman Kathleen Corbet during the Board’s regular meeting, held at Town Hall.

He referred to a request that Corbet had made more than 30 days prior to the scheduled Dec. 14 selectmen meeting, to move it back one day.

Corbet had introduced the topic, saying she had asked to swap the Board’s Dec. 14 meeting with the Dec. 13 meeting of the Selectmen’s Advisory Committee on Buildings and Infrastructure “since two out of the three of us actually participate in both those meetings.”

“Kevin wrote and said I am ‘choosing to attend a meeting that involves personal financial gain over the town’s regular business,’ ” Corbet said.

That assertion is “absolutely not” true, she said.

“We all have different responsibilities, different jobs and so forth,” Corbet said. “One of mine is also serving on the board of the Fortune 100 insurance company. And I gave plenty of notice in terms of the opportunity to change—there’s only three of us, hopefully that’s easy to make a change. I have attended every single meeting of the Board of Selectmen, without asking for any change, even when I’ve had to call in from vacation. I have no problem with that. So this was just a kind request to make the change, just flip it to one day earlier. Kevin, you said you think it’s an Ethics Code violation, and I argue that it’s not. I’m just asking for an opportunity to change for something that I don’t do often. This is the first time.”

It wasn’t immediately clear whether Corbet’s reference to an accusation of an “Ethics Code violation” meant that Moynihan had actually a lodged a formal complaint with the New Canaan Ethics Board. That appointed body had held a special meeting last week “to consider a recently filed ethics complaint.” The complaint itself was not made public, as Ethics Board met in executive session to discuss it.

The revelation about Moynihan’s denial of Corbet’s request for a date change came during a section of the selectmen meeting dedicated to general matters before the town. It also came as both Corbet Selectman Nick Williams have voiced support for a New Canaan Police Department renovation-in-place at the current site rather than building anew elsewhere in town—an option long favored by Moynihan, who nearly three years ago aired the idea of constructing a new police station on a Saxe Middle School ballfield (a proposal formally unveiled in September following months of closed-door discussions).

According to a bio posted on the town website, Corbet since 2008 has served on the board of MassMutual Financial Group.

Moynihan appeared to refer to her role with the company during the meeting, saying, “Aren’t you required under SEC rules to attend a certain number of meetings? Get paid per meeting?”

Corbet responded, “No, I’m not paid per meeting, no.”

When Moynihan said that the selectmen would need to schedule a special meeting in order to accommodate Corbet’s request, she noted that it could be a regular meeting if it was scheduled more than 30 days before, and that she had given ample time for such a meeting to be scheduled. (The selectmen do sometimes meet on Mondays, as they did the week of Election Day earlier this month.)

Corbet said, “If you would be kind as to reconsider possibly switching it to 13th, I would be most grateful.”

The Town Council adopted its Code of Ethics four years ago. Corbet, who served as secretary of the legislative body at the time, helped lead the effort to draft the updated Code, and create an Ethics Board.

Here’s the section of the selectmen meeting where the exchange happened, bookmarked: