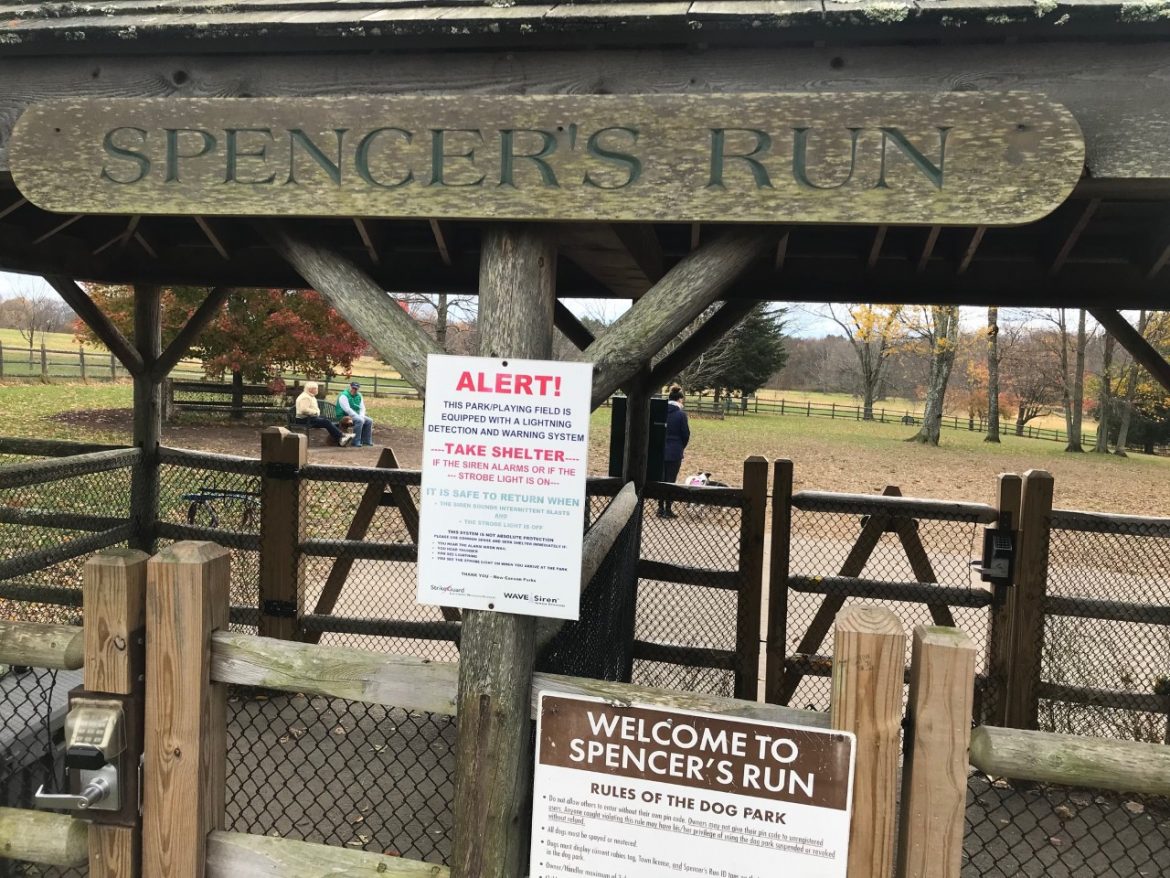 The rules sign is posted outside the entrance gate at Spencer's Run, the dog park in Waveny. Credit: Michael Dinan

Saying some of those who use the dog run at Waveny are breaking a rule that prohibits young children from entering the fenced-in area, officials are planning to install an even more explicit sign there.

This wording already appears on a “Rules of the Dog Park” sign outside Spencer’s Run: “Children under five are prohibited from entering Spencer’s Run—no exceptions. This is for the protection of the children.”

Yet recently, Parks & Recreation Commissioner George Benington said, when he’s gone to the popular dog run “there have been some not-so-bright adults who have been bringing in some of their toddlers.”

Addressing the full Commission during its Nov. 10 meeting, Benington asked whether a dedicated sign saying “No children under the age of five” could be posted at the gated entrance to Spencer’s Run.

“One mother gives us some pushback in there,” he said at the meeting, held via videoconference.

Recreation Director Steve Benko said that although the rules of the park are spelled out on the gate, people don’t read them. He said that the town has two two new signs for the gate—one specifying that membership is required, the other about the prohibition on young children. Benko said the new signs would be posted soon.

The 1.5-acre dog run, located near the “paddle hut” toward the Lapham Road side of Waveny, is gated with a user code-activated entrance for registered members. Dogs must be vaccinated and licensed. Residents pay annual dues of $25 for the first dog and $15 for each additional dog, nonresidents $40 and $15. About two-thirds of the 700-plus members are nonresidents, officials have said. Police have been called to the dog run at times when there are fights and other problems between dogs and their owners.

Parks Superintendent John Howe said during the meeting that “the dog park hasn’t been as of a friendly a place for us for maintenance this year, either.”

“Besides people going in and breaking their own rules, we have problems when we go in there and try to mow,” he said.

“You will be there quite often and you will see someone come in with their coffee and their dog and their stroller,” she said.

Benington added, “And they’re on their cell phone.”