A team assembled by First Selectman Kevin Moynihan on Wednesday night unveiled a proposed new $23.5 million police station that would be built on a Saxe Middle School baseball diamond.

The two-story, approximately 24,000- to 25,000-square-foot glass-and-brick exterior building would sit on 3.6 acres running east off of South Avenue, along a line of trees that separates the school property from the New Canaan Y (see videos embedded above and below), according to a presentation from a New Britain-based architectural firm. 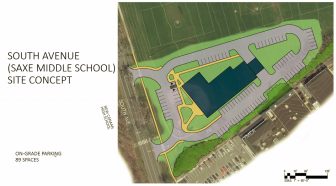 The new station would also include an underground level with a shooting range, and 89 parking spots would be spaced across about 36,000-square-feet around the building, according to Eric Rossi and Chuck Boos, a specialist and founding principal, respectively, at Kaestle Boos Associates, Inc.

The Saxe ballfield was one of about a dozen potential sites that the firm’s representatives, Moynihan, New Canaan Department of Public Works officials and a former Police Commission chair have been studying out of the public eye for months and it’s “the site that’s risen to the top of the heap,” Rossi said.

“This site is fairly flat,” he told members of members of the Board of Selectmen, Board of Finance and Town Council gathered at Town Hall and via videoconference for a special meeting.

“It’s an existing [baseball] field, 60-foot baseline [baseball] field. Using the site allows us to get all the redundancies and all the site and mechanical systems that we need to get into police station in an easy way. The generator can go on-grade. All the mechanicals would go on-grade. We’ve designed a range in the basement, so all the mechanicals for that can go on. And we could design around that range to reduce any sound impacts associated with it.”

The new building also would be oriented on the field in such a way that a soccer or lacrosse field would fit between it and the driveway into Saxe off of South Avenue, he said.

Under the Moynihan group’s plan, use of the baseball diamond that would be eliminated by new police station could be made up by turfing the existing one in the southwest corner of Conner field for an additional $500,000. In addition, two of four Saxe athletic fields that face South Avenue also would be turfed as part of the overall plan, Moynihan said.

Moynihan first shared the idea of building a new police station on the ballfield during a press briefing in January 2019 (audio here). Moynihan, who later canceled the press briefings, said the idea originated with Stuart Sawabini, former chair of the Police Commission.

Sawabini now sits as an “advisor” on a Police Department Building Committee that began meeting last December. At the Committee’s first meeting, Sawabini said that if a suitable location could be found, he would prefer to build anew versus renovating the existing structure.

In February, Moynihan spoke in favor of building a new police station somewhere else in town. He then formed a group of town workers who, together with the architectural firm, have been studying the possibility of building a new police station elsewhere in New Canaan, while the Committee itself has been focused on the possibilities of renovation or rebuilding on-site (see below). Moynihan has been tight-lipped about prospective new locations, withholding the information even from Committee members. (Such groups of municipal employees—without board or commission members present—are allowed to meet out of the public eye, under state law.)

Some voiced frustration over being kept in the dark, and last month Committee member Penny Rashin said her understanding is that the Moynihan group is studying the possibility of siting a new department on school property. Selectman Nick Williams the following week called building it on the Saxe field “a dumb idea.”

Williams, and others, voiced skepticism and criticism of the proposal at Wednesday’s meeting.

“I think keeping it where it is sounds like a good plan,” Williams said of a police station project.

He added, “I do see any change in location, whether it’s next to the Y—which I think is completely untenable politically, and it shouldn’t be anyway, because aesthetically that’s important to people from New Canaan—but I just think that time is of the essence and we’ve got to get these guys a new and better police department.”

Town officials have discussed the need to renovate the 1927-built Police Department on South Avenue—originally built as the first New Canaan High School—for many years. The cost originally was pegged at $5 million, then $7 million, then $10 million and, most recently, somewhere in the $14.7 million to $18 million range.

Town Councilman Steve Karl noted that many residents live in the area of the New Canaan Y, and also flagged a potential traffic problem with the proposed site.

“I drive down South Avenue probably two to three times a day,” Karl said. Referring to the proposed driveways running off of South Avenue to a new police station, he continued, “Those two driveways right there would be completely blocked at 230 to 245. I mean completely blocked, with bumper-to-bumper traffic coming through there. So unless we figure out way a mitigate that, that’s going to be an issue. That is just my first take on this design. And that’s five days a week.”

The first part of Wednesday’s meeting was dedicated to potential Police Department projects that have been discussed publicly already—namely, renovating the existing building or demolishing it and constructing a new one on-site. Brian Humes of Berlin-based Jacunski Humes Architects, LLC once again presented cost estimates for three projects at the current Police Department site, as follows (each would include about 18 months of construction, he has said):

Moynihan has said that building a new police station that requires minimal site work could yield up to $1 million in cost savings. As he has in the past, Moynihan said during the meeting that the South Avenue property where the Police Department now sits could be sold for upwards of $6 million to a developer, and that doing so could increase not only senior housing in New Canaan but also the town’s tax base. Moynihan said he’s talked to the New Canaan Housing Authority and that that agency could be involved in such a development project, given the Planning & Zoning Commission’s adoption Tuesday night of amendments to the town’s Zoning Regulations on inclusionary zoning and affordable housing.

Yet several of the elected and appointed officials at the meeting appeared to push back on Moynihan’s suggestion that the other potential sites for a new building had been fully vetted. Rossi reviewed several of those sites—such as the upper section of the Locust Avenue Lot, the mulch pile site and Lumberyard Lot—and explained why due to projected cost, site restrictions such as wetlands or other reasons they were rejected.

Board of Finance member Colm Dobbyn said, “I feel like we are being driven towards one choice, because it’s all pre-determined that all the other ones are no good, when we haven’t gone through the decision-making. I have talked to quite a few people around town. I have yet to meet a single person who thinks that putting gate police station beside the Y is a good choice.”

He added, “I think we do need to take into account public opinion, because it is going to be a controversial decision. And I think we shouldn’t ramrod a single choice among all these choices.”

When Moynihan first aired the idea of building a new police station on the Saxe field, in early 2019, he also said a “replacement” baseball field could be built at Kiwanis Park. In a comment posted to NewCanaanite.com he said, in part, that officials from the New Canaan Athletic Foundation were interested in having a new ball field at Kiwanis, though representatives from the organization did not confirm that assertion.

In the same comment, Moynihan said this news outlet had “misreported” the idea that he was pressing the idea of siting a new police station at the Saxe field, adding, “We are a long way from reaching a recommendation about renovation versus relocation because there are several variables still in motion, but I assure you that there will be ample opportunity for community input before a final recommendation is reached.”

Town Council Chair John Engel said at the meeting that the conceptual rendering of the proposed new building on the ball field was “a nice design.”

“I like it,” Engel said. “It’s better than I was expecting, and I think you have really nice job of locating it in that location but I will give feedback that this location remains highly controversial. I think it is the elephant in the room. I think that we can talk all day long about $1 million worth of price, cost-benefit and we can talk about features and ranges, but all of that is secondary to location.”

The assembled officials at the meeting asked whether the Kaestle Boos estimate includes the dispatch center (yes), whether the figure includes the cost of redoing Conner Field (no, that’s another $500,000), whether the firm looked at the safety implications at putting police station between an active YMCA and the biggest middle school in Connecticut (in other towns new police stations have been located near schools), whether there’s an estimate to the cost of making the New Canaan EMS building standalone (not yet), what would be the height of the fencing between the police station and school property (whatever it needs to be), whether LEED certification is built into the design (yes), whether here have been traffic impact studies on the site (no) and whether all the glass on the facade is bullet proof (that would be up to the police).

Board of Finance Chair Todd Lavieri noted that the financials on the options for keeping the police station where it is appeared to be more fleshed out, and said the open questions regarding costs and potential revenue related to the build-as-new option will be studied by the Board of Finance. Moynihan said the finance board is the next public body that should take up the question of whether to renovate the existing station or build anew elsewhere.