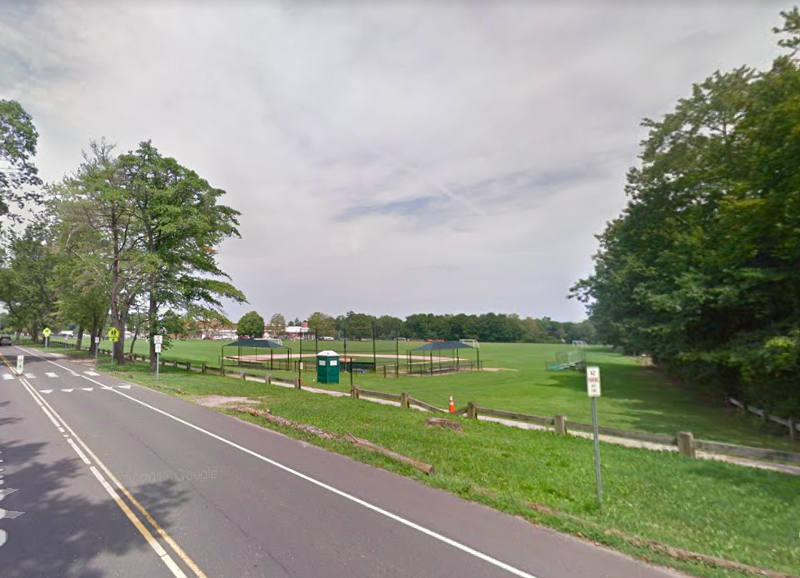 A proposal floated by First Selectman Kevin Moynihan in the past was to build a new Police Station at the Saxe Middle School baseball diamond. Streetview

A group of town workers meeting out of the public eye is expected to propose building a new police station somewhere on New Canaan Public Schools grounds, according to a member of a separate committee that also is working on options for a future police facility.

The volunteer Police Department Building Committee has met publicly since last December to study renovation or rebuilding options for a new facility at the current South Avenue site. At the same time, a group of town employees at First Selectman Kevin Moynihan’s behest has been reviewing alternate locations for a future police station in New Canaan. Under state sunshine laws, groups of employees are not required to hold public meetings, and it’s in recent months the secrecy surrounding their findings has emerged as a source of frustration for some Committee members.

During a regular Committee meeting held Aug. 12 via videoconference, Moynihan said the Board of Selectmen would soon take up his group’s recommendations regarding “alternate locations” fora police building.

Committee member Penny Rashin responded, “But why aren’t you bringing it to us? why are you keeping us in the dark on this question? I am understanding we’re basically looking at other school locations. We’re trying to do our work.”

Moynihan replied, “Penny, your [the Committee’s] job is to do a project once we decide what the project is.”

The exchange came after an architect working with the town—Brian Humes of Berlin-based Jacunski Humes Architects, LLC—presented cost estimates for three projects at the current Police Department site, as follows (each would include about 18 months of construction, he said):

Moynihan said during the meeting that building a new police station somewhere that “does not have a lot of site work” could yield up to $1 million in cost savings.

“Keep in mind the big factor here is what South Avenue could be sold for to a developer to make it into residential housing with the iconic look of the front,” Moynihan said. Returning to an idea he’s aired in the past, Moynihan added that town officials “have talked to a leading commercial real estate broker in Fairfield County who toured the building and the property” and that it could be worth $6 million to $9 million to a developer, depending largely on how many residential units could be created.

It isn’t clear what alternate sites the Moynihan group is considering. In February, Moynihan spoke in favor of building a new police station somewhere else in town. Two years ago, he floated the idea of building it along South Avenue where a Saxe Middle School baseball diamond now stands.

Rashin during last week’s meeting told Moynihan that his group “should present to us [the Committee].”

“Obviously the decision is going to be up to the town bodies,” she’s aid. “Whatever we present has to go through the town bodies. But we need to know what is going on with the other stream. You split it like last April and we have had no information on it since.”

Moynihan said, “That is intentional. OK?”

Rashin responded, “Intentional because you are trying to avoid public conflict, but I think it’s time to come out and tell us what various options are.”

Even if the selectmen weighed in on a decision and Moynihan himself wanted to build a new police station elsewhere in New Canaan, it’s not clear the Board would vote for that. Selectman Nick Williams said in March that the current Police Department location is the best option.

Moynihan said his group would make its recommendations public in September. Officials had said earlier this summer that the alternate NCPD sites would be revealed in July. (Moynihan in a comment posted to NewCanaanite.com more than two-and-a-half years ago said, “We are a long way from reaching a recommendation about renovation versus relocation because there are several variables still in motion, but I assure you that there will be ample opportunity for community input before a final recommendation is reached.”)

Committee members said the renovation options they’ve studied are most likely to earn the support of the town funding bodies, the Board of Finance and Town Council.

Referring to the cost estimates, Rashin said, “These numbers seem to create a pretty compelling case to renovate in place. It seems like it’s the most bang for the buck for the town.”
Committee Chair Bill Walbert said that a proposal to build anew elsewhere in New Canaan would have “a lower probability or lower chance of town approvals, potentially, than to renovate the existing building, which would probably have the lowest chance of meeting a lot of resistance.”

The Committee spent part of the meeting talking about how and when it should presents its own renovation options to the town funding bodies.

Part of the meeting appeared to have been cut from the video recording posted to the town’s YouTube channel. That section of the meeting (audio embedded above) followed Rashin’s asking Moynihan whether he would come to the Committee’s September meeting with an architect and present on alternate locations.

“I mean, we just want to know what’s going on, Kevin,” she said.

This followed (transcribed from recording embedded above):

Moynihan: OK I’ve got to go for now.

Committee member Amy Murphy Carroll: So wait, are you going to come to the meeting?

Murphy Carroll: What about the rest of us?

Moynihan left the meeting at that point, inadvertently ending the Zoom call (which relaunched soon after).

Opened in 1927 as the first New Canaan High School, the police headquarters on South Avenue is inefficient and has failing systems, officials have said. The New Canaan Police Department got its last major renovation in 1981. Officials have called for a project there for years. In 2017, a panel that studied and made recommendations about town-owned buildings in New Canaan said the town should fund architectural and engineering needed for renovations.

The building was designed in 1926 by John Nobel Pierson and Son, Architects, of Perth Amboy, N.J. The same architectural firm was again selected in 1932 for its neighbor, the former Junior High School, now the Schoolhouse Apartments.