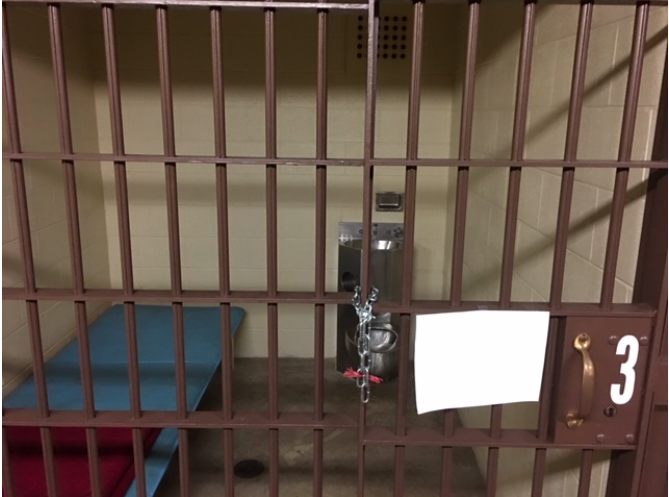 Though it may look perfectly fine to those driving past on South Avenue, the New Canaan Police Department building has defective plumbing, mold, crumbling masonry, 16 broken windows, a leaking skylight, a sewer fly problem in the men’s locker room, loose and broken tiles in the women’s and poor or non-existent ventilation throughout, officials said Wednesday.

Two of four men’s jail cells have been closed due to plumbing issues, Police Chief Leon Krolikowski said during a regular meeting of the Police Commission, and the old-style cell bars in them also must be replaced with flat plexiglass doors because prisoners have tried to hang themselves by the bars.

Several offices in the building are not connected to its centralized HVAC system, and 48 windows require hardware that’s no longer available because the windows themselves are so old, he said.

“There is moisture in some rooms—that’s not a good thing,” Krolikowski said during the meeting, held in the training room at police headquarters. “Ventilation in processing areas is nonexistent and we often get narcotic smells in our hallways due to evidence storage and no way to ventilate that.”

The comments came during a general update to the Commission, as the police building itself—though multiple town bodies have acknowledged the pressing need for renovation—sits as-is while town officials consider a complicated, multi-transaction proposal that would see the department relocated downtown (more on that below).

“I don’t think the public knows any of this,” Police Commissioner Jim McLaughlin said, referring to the problems enumerated by the chief during his brief presentation. “They think, ‘Oh there is the Police Department and the police are out and everything seems fine to me.’ They don’t come in to look around.”

The problems are well-documented and have been in front of town officials for years.

Though a selectmen-appointed committee in December 2017 concluded that the Police Department building has outdated major systems and a “chronically underutilized” upper floor, and also that it is “past due for a full renovation” with an “urgent need to correct existing physical and code compliance problems in the building,” the town has no funds earmarked in its five-year capital plan for that renovation.

Opened in 1927 as the original New Canaan High School, the police headquarters at 174 South Ave. hasn’t had a major renovation in nearly four decades, Krolikowski said.

“I think it’s time to do something substantial,” Krolikowski said. “Just what that answer is is the question.”

The highest level of municipal government has been wrestling with that same question. First Selectman Kevin Moynihan has said the town has three options regarding the Police Department: renovate it in place, build a new one or acquire a large commercial building that’s on the market downtown and move both the police and Board of Education into it.

Yet each of those options also presents challenges.

An estimated $10.6 million renovation of the existing building is complicated because it’s difficult to house an agency in a structure while it’s being renovated, Moynihan has said.

A new $15 million structure would require New Canaan to identify town-owned property where it could be built, and the only location identified so far—a baseball field at Saxe Middle School—received immediate and wide criticism when the idea was made public in January.

Moynihan also has floated the idea of purchasing the “Covia” building at Grove and Elm Streets for a yet-unknown price, putting an addition on it to make a new NCPD-Board of Ed work, also at an unknown cost, and offsetting those expenses by selling the current NCPD headquarters for conversion to senior housing.

“From a police viewpoint, I am staggered that we would in any way really consider a downtown location where you’ve got a train station blocking Grove [Street] every hour and then you’ve got a highly congested Elm Street, going up and down,” he said. “To me it makes no sense at all.”

Krolikowski said he’s “grateful for the energy that has been invested and the desire to do something for us and to think outside the box.”

“I’m grateful for that kind of energy, that’s a positive thing,” he said. “But I think it was smart for us to explore these three different options and cost them out and determine what is the best way for these things to proceed.”

The Commission and Krolikowski agreed that their preference would be to move forward with a renovation of the existing building. DeCew said he would issue a memorandum to the town outlining the Commission’s position.

Krolikowski said he knows of other police departments that have operated out of buildings that undergo renovations and that so long as it’s well-planned and phased, it’s not a problem. Commissioner Paul Foley said the New Canaan Fire Department underwent a similar project recently and that it worked out fine.

Meanwhile, no area of the Police Department is free from physical problems. The company that makes the radio equipment for all of New Canaan, gear that is housed in the NCPD’s attic space, said recently that they’re “very concerned” that the extreme heat there could affect that equipment, Krolikowski said.

And one jail cell has been padlocked shut for the foreseeable future because a toilet is broken and the town estimates it would cost up to $10,000 to replace it, the chief said.

Town building officials told Krolikowski that “they are not going to spend money on it considering a potential renovation or whatever ends up happening, so that just contributes to the complexity of it,” he said.

“The town said it would not repair a toilet because there might be a renovation?” he said.

When Krolikowski said yes, DeCew asked how long that problem has lingered.

“About a month,” Krolikowski said.

The chief said the Commission would need to put pressure on the town to get that fixed if there’s no comprehensive renovation of the building coming, noting that it’s too bad because the $10,000 “would be lost, because you are repairing something that may not be usable when the renovation happens.”

6 thoughts on “‘I Don’t Think the Public Knows’: Police Commission Calls for Renovation of NCPD Headquarters”