Though fellow members of the Board of Selectmen are voicing strong opposition, New Canaan’s highest elected official this week has pushed the idea of building a new police station on a Saxe Middle School field where a baseball diamond now stands.

First Selectman Kevin Moynihan during budget discussions on Thursday questioned the superintendent of schools about the demand for athletic fields at Saxe and later pressed the recreation director about the prospect of building a replacement baseball diamond at Kiwanis Park.

Referring to a grass lot at the Old Norwalk Road park, Moynihan told Recreation Director Steve Benko during a budget presentation to the selectmen at Town Hall, “What I have raised is the possibility of building a ballpark there.”

Benko responded that the area “is not big enough” because it lacks the 205 feet down a right-field line and 225 feet to center field that the current diamond at Saxe has. 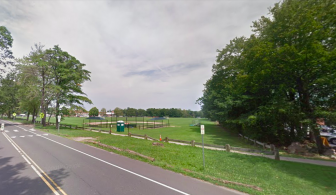 A proposal has been floated to build a new Police Station at the Saxe Middle School baseball diamond. Streetview

“If you are trying to replicate what we have at Saxe … we do not have that distance,” Benko said. “I taped it out. And someone said to cut into the hillside there, but the problem with the hillside is there’s a rural pond back there.”

Moynihan responded that former Police Commissioner Stuart Sawabini—who brought forward the idea of building a new police headquarters on the Saxe field–also had measured it, as had the parks superintendent.

Benko said, “I don’t think they have the right measurements.”

The first selectman mentioned Sawabini’s proposal during a press briefing last week, generating wide discussion in town. Opened in 1927 as the town’s first high school, the Police Department building on South Avenue is in need of a renovation that’s estimated to cost about $10 million. Moynihan has eyed a commercial building downtown that could serve as a future police station (as well as a headquarters for district administrators) and has also said the major hurdle in building a new police station is finding town land to build on.

Sawabini’s proposal, to build a new station along South Avenue, just north of the YMCA, is the only option that’s emerged, Moynihan said.

Selectman Kit Devereaux on Tuesday suggested that New Canaan may be best served if the current building is renovated in place, instead of building anew or moving NCPD.

“My point is simply that a new building would be fantastic but I don’t know the the town is in a place to do that right now when there are so many unsure things in the world,” Devereaux said during the Board’s regular meeting Tuesday, also held at Town Hall. “But I am very much in favor of seeing the current building made habitable and good place to be.”

Selectman Nick Williams said, “I am opposed to moving the police station to the Saxe playing fields. I think it would be a big mistake. I am not against rehabbing the police station, because we have been talking about that for years, but with respect to the specific issue of moving it to the Saxe playing fields, I would not want to see a building and parking lot tomorrow where today we have young children running around with lacrosse sticks and soccer balls and such.”

He added: “I think when you get off the Merritt Parkway and come to New Canaan for the first time, you pass the [Mormon] church, you pass the Y, which looks great, and then you have this Norman Rockwell-like vista of young kids running around playing sports on verdant green grass, and I would hate to see that spoiled—nothing against the PD—by putting a police station there.”

Even so, as Superintendent of Schools Dr. Bryan Luizzi presented the district’s revised operating budget for next fiscal year—a 2.03 percent year-over-year increase from current spending—Moynihan asked, “What is the need for the Saxe athletic fields?”

Luizzi responded that while NCHS Athletic Director Jay Egan would have more information, “I know that there is always pressure on all the fields in town.”

“But I don’t know the specifics of the Saxe fields. I know it’s the high school programs that go right after school to use them and then there is typically whether it’s 5:30 or 6 o’clock—whatever the timing is—when they come off and then the town programs move in. But we do use them. We are over at Saxe with our lacrosse teams, our soccers teams, the others. They are over there.”

Asked during Tuesday’s Board meeting while he presented NCPD’s budget whether the department’s current location is better than a proposed downtown site, Police Chief Leon Krolikowski said each location has advantages.

When Williams noted that the current location is closer to schools than a building at the corner of Grove and Elm Streets, Krolikowski said that’s true and that’s why the Saxe fields location was suggested.

“It’s one of the concepts and everybody has got their point of view on things,” the chief said. “The good news there is a lot of initiative to do something, but we just need to figure out what the right is for us long term given the town’s economic issues right now. What is the smartest thing to do long term? Because this should be 40- or 50-year-project. It should not be a 10-year project and we are looking at things again saying we need more money. So whatever it is we do, I am pretty confident that there are people doing real careful analysis and we need to figure out what the right option is.”