The number of New Canaan residents fully vaccinated against COVID-19 virus stands at 16,233, or 80.23% of the population, Health Director Jenn Eielson told members of the Health & Human Services Commission during their regular meeting Thursday. The data was up-to-date as of last week, Eielson said. Here’s a breakdown:

Source: New Canaan Health Department
*Data is current as of the week of Dec. 27, 2021

A dog bit a delivery person on Beacon Hill Lane, according to a report made to New Canaan Police at about 2:43 p.m. on Dec. 29.

The Health & Human Services Commission during the re-elected Dr. Harrison Pierce as chair and Alyssa MacKenzie as secretary. Commissioner Alicia Meyer was the first member of the appointed body to second MacKenzie’s nomination, though First Selectman Kevin Moynihan, who oversaw the election on the Zoom meeting, recognized a second made by Commissioner Jim Lisher instead.

The New Canaan Coalition’s free Zoom presentation on vaping is to be held at 7 p.m. on Jan. 12. Info here. 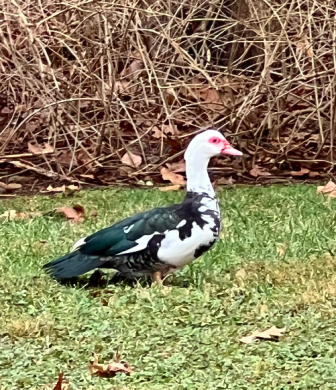 A lost Muscovy duck that had been spotted on Buttery Road on Dec. 30 was caught by Animal Nation on Comstock Hill Road the following day. The domestic duck had not been claimed and is being cared for by the nonprofit organization, according to Animal Control Officer Allyson Halm.

The Board of Selectmen during a special meeting Monday appointed Keith Richey to the Parks & Recreation Commission for the balance of a three-year term ending Dec. 1. He is filling the unexpired term of Commissioner Laura Costigan, Moynihan said. Richey had served as chair of the Parking Commission for 20-plus years. It’s unclear who will take his place on that appointed body. A Parking Commission meeting originally scheduled for Jan. 6 appears to have been rescheduled for Jan. 24, according to the town website.

Congratulations to 2020 New Canaan High School graduate Jaden Konspore on making the President’s List as a “highly distinguished” student in the fall 2021 term at the College of Charleston.

The number of ID theft incidents in New Canaan increased about 27% through the first 11 months of 2021—from 30 to 38—compared the same period the year before, according to data shared by Police Chief Leon Krolikowski at the Dec. 15 Police Commission meeting. Stolen vehicles increased from 27 to 36 in the same period, the chief reported. 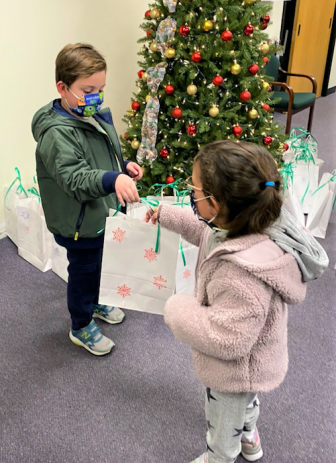 Will handing a bag to Parker. Photo courtesy of STAR Inc.

STAR board member and New Canaan resident Amanda King Heavey and her son, Will, a student at East School, along with the students in grades K-4, Community Service committee of volunteer parents, PTC board and Principal Kris Woleck came together over the holidays to give a gift to all children served by the STAR Rubino Family Center. Each child in the early intervention pediatric therapy program received a handmade card with a cheerful holiday note along with a book to enjoy during the holidays. Likewise, a specially curated selection of books that address age appropriate understanding of unique abilities, inclusion, diversity, and kindness will be shared at the school and donated to STAR Rubino Family Center lending library.

The “Women of Waveny” exhibit at the New Canaan Historical Society & Museum is open and runs through March 31. Some background here on the show.

Asked by Lisher at the Commission’s meeting about the status of the federally funded COVID-19 home-test kits being distributed through the state to individual towns, Eielson said that “a significantly reduced allocation” did arrive. “Those that had signed up on the SignUp Genius were notified, they picked them up at Lapham [Community Center] through a drive-thru,” Eielson said. CERT helped with the effort. Some of the kits were set aside for a vulnerable group of seniors, such as those with low incomes, that are part of a Human Services Department group, Eielson said.

The selectmen on Monday voted 3-0 to approve the hiring of Sarah Carey as assistant zoning inspector in Planning & Zoning effective Jan. 17. 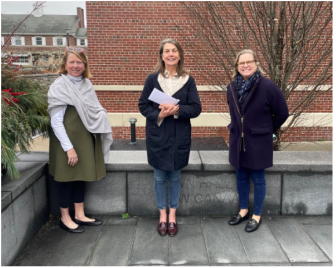 Throughout December members of the New Canaan Garden Club were busy once with annual civic projects in the community. To assist local families, the Club did its yearly tree decorating event for the Holiday Stroll.Six trees were given to Human Services to be delivered to residents in need of some holiday cheer. Through the generosity of individual club members, Co-Presidents Karen Murray and Debbie Simpson presented Director of Human Services Bethany Zaro with donations totaling more than $2,800 to benefit both the town’s Warm-Up Fund and the New Canaan Food Pantry.

New Canaan Library will offer its free, full-service AARP/VITA/IRS Volunteer Tax Assistance Program via both on-site personal counseling in-person and virtually through a secure Internet site. The service is open to all individuals, with special attention to seniors and low- to moderate-income households. On-site preparation in the library’s Lamb Room will be available from 2 to 7 p.m. Mondays Jan. 24 to April 15. Appointments are required at 860-590-8910. The library cannot book appointments. The appointment line will begin taking appointments Jan. 10. A virtual option is also available and can be accessed via https://simplifyct.org/

Here’s the “Dog of the Week” from the Cathy Kangas Foundation for Animals. Pete is owned by an employee of New Canaan-based PRAI Beauty, Kangas’s cruelty-free skincare company:

Michele Sloan, a residential real estate agent with Houlihan Lawrence’s New Canaan office, has been named recipient of the New Canaan Board of Realtors Citizen of the Year Award 2021. 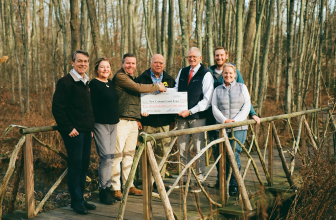 Finally, Dave Hunt, longtime New Canaan resident, was honored in October 2021 as the New Canaan Gridiron Club’s 61st ‘Fall Guy’ at the annual Gridiron “roast” at the Country Club of New Canaan. Since 1961, the Gridiron Club has celebrated a member of the community who has set an example of community spirit and leadership, in a musical roast of his life. Hunt and his wife, Sara, moved to New Canaan in 1976 and immediately became active in community service – they served as Co-Presidents of the NCHS Sports Council. Dave Hunt has also served on Boards for multiple New Canaan organizations, including the New Canaan Community Foundation, Silver Hill Hospital, Waveny LifeCare Network, and the Board of Assessment Appeals.  He also chaired the town’s Charter Revision Commission in 2016. Long a supporter of land preservation, Hunt chose the New Canaan Land Trust to be the recipient of the Gridiron Club’s annual charitable contribution from net show proceeds. Each year, the Gridiron Club makes a donation to a nonprofit organization in honor of the Fall Guy.