Weeks after New Canaan’s highest-elected official denied her request to schedule a special meeting so that she could attend, Selectman Kathleen Corbet on Monday called for a New Year’s resolution whereby town officials would “all work together” to “accommodate” one another.

“[I’m] certainly happy to do that to help for the change for tomorrow,” Corbet said during what was, ironically, a special meeting of the Board of Selectmen.

In November, First Selectman Kevin Moynihan denied Corbet’s request to move a Dec. 14 regular meeting of the selectmen back one day, saying at the time that it would set “a very bad precedent” to honor such requests given that “we know when our meetings are scheduled and we have to be here.” Corbet had asked to have the Board’s Dec. 14 meeting moved back one day because she would be out of town.

On Monday, Corbet opened a brief discussion about the change to the selectmen’s regular meeting schedule by asking, “I’m just curious, I don’t know—what was the purpose for the date change that we have a special meeting today versus tomorrow?”

Moynihan responded, “I’m scheduled to leave tomorrow [Jan. 4]. Like you, I’m going to be on vacation.”

Corbet said, “Good for you,” before making her comments about a New Year’s resolution. She spoke during a section of the Board’s meeting set aside for general matters before the town.

Moynihan has made specific and frequent references to Corbet’s attendance during the last two selectmen meetings. On Dec. 14—a meeting that Corbet could not attend as a result of his own denial of her request to move it back one day—Moyinhan opened the Board’s regular meeting by saying, “First of all, we have a quorum. Nick and I are here. Kathleen is absent.”

And prior to the start of Monday’s 9 a.m. meeting, Moynihan asked Corbet—who was attending via videoconference—“what time is it there?” 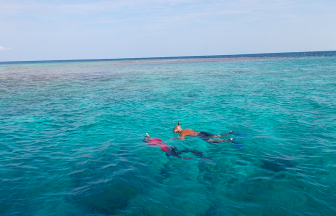 When Corbet said it was 6 p.m. where she was, this rather awkward exchange followed:

Moynihan: That’s cool. Are the beaches better there?

Moynihan: Than the Caribbean.

Corbet: No, they are cool. We are in the middle of the Indian Ocean. It’s a great scuba and snorkeling place.

Minutes later, Moynihan opened the selectmen meeting by saying, “Good morning everyone, including Kathleen from halfway around the world. Six p.m. your time?” This exchange followed:

Moynihan: This is a special meeting in lieu of tomorrow’s canceled regular meeting for the Board of Selectmen of the town of New Canaan.

In November, at the time Corbet raised the issue of Moynihan’s denial of her request, she noted that the first selectman had said her request amounted to “an Ethics Code violation.” It was disclosed during a Tuesday night Ethics Board meeting that an ethics complaint had been lodged Nov. 1 against Moynihan.

One thought on “Selectman Corbet on Scheduling Meetings: Let’s ‘All Work Together’”