New Canaan Police say a pillow case full of jewelry and other items was reported found on the side of White Oak Shade Road near the intersection of Gerdes Road at about 10:41 a.m. Tuesday. The items in it are connected to a residential burglary in Weston, police said, and will be turned over to detectives from that town. 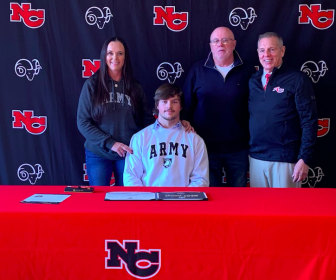 Congrats to New Canaan High School senior Ned Brady who signed his National Letter of Intent to play football at Army. Brady—a two-sport co-captain in football and basketball—was joined by family, coaches, NCHS administration, teammates and friends at a ceremony Wednesday afternoon at Waveny. One of the most highly recruited linemen in the state, Brady chose Army over several other Division 1 schools including Syracuse, Rutgers, Boston College, Navy and Buffalo. “Army was the only place I really ever wanted to go,” Brady told NewCanaanite.com. “My brother is in the military and that is something I’ve always wanted to do. It’s going to be tough to say goodbye to my teammates. We had a special bond with each other, but it’s a big honor and I’m proud to represent New Canaan playing for Army.”

Police at 10:06 a.m. on Dec. 11 received a report of checks stolen from a mailbox on Buttery Road.

Kindergarten pre-registration for next year is open on the New Canaan Public Schools website. Children entering kindergarten for the 2022-23 school year must be five years old on or before Jan. 1, 2023. More information is available here. 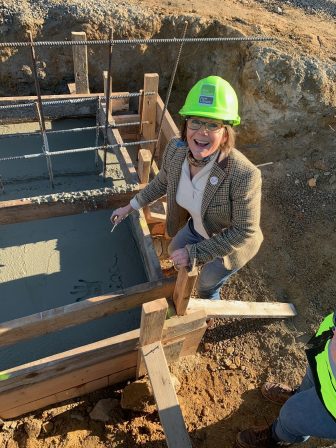 New Canaan Library’s Executive Director Lisa Oldham was close at hand as Turner Construction took the monumental step of pouring footings for the construction of the new building. Groups of school children were on hand as well to witness this exciting milestone. Photo courtesy of New Canaan Library

The Planning & Zoning Commission on Tuesday voted 7-2 in favor of accepting a proposal from New Canaan Library to relocate a portion of its historic building toward the western boundary of its property. Chair John Goodwin and Commissioners John Kriz, Krista Neilson, Kent Turner, Dick Ward, Arthur Casavant and Chris Hering. Those voting against included Commissioners Dan Radman and James Basch.

New Canaan’s Cobie Jane is featured in a an article published this week in Ms. magazine, titled “Empty Home for the Holidays: Mothers Who Can’t See Their Children Blame Broken Family Court System.”

Police at 10:07 a.m. Wednesday received a report of a wallet stolen from a motor vehicle parked at 564 South Ave. The street address is that of the New Canaan YMCA.

The Board of Selectmen during its regular meeting Tuesday voted 2-0 to approve the hiring of Enid Xhafa as a mechanic in the Highway Department and Kevin O’Connor as assistant to the Town Clerk.

Kelley Franco Throop (of the New Canaan Francos) has a new essay, “The Loop”—about running in her neighborhood of Rowayton the past 25 years—and it’s published here, in the new edition of Sound Watch Magazine. Take a look (and no, she wasn’t running from the cops).

First Selectman Kevin Moynihan opened Tuesday’s selectmen meeting by saying, “First of all, we have a quorum. Nick and I are here. Kathleen is absent.” He referred to Selectmen Kathleen Corbet and Nick Williams. Moynihan last month denied a request from Corbet to move this week’s Board meeting back one day so that she could attend. In making her request, Corbet noted that the Board meeting could be flip-flopped with that of the Selectmen’s Advisory Committee on Buildings & Infrastructure. That Committee’s meeting was canceled this week in any case. 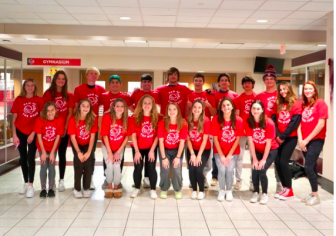 The collective New Canaan “Rams of the Week” of the fall season gathered for a group photo at NCHS recently. This year, Boys Golf won the D1 State and FCIAC Championships. Girls Soccer qualified for both the FCIAC and CIAC playoffs. Varsity Football won the Turkey Bowl over the Darien Blue Wave (12-7) and finished the season 10-2, Girls Swim and Dive finished third at the Class L Championship Meet, while Girls Cross Country had a great championship season, finishing third at the FCIAC Championship Meet, second at the CIAC Class L Championship and seventh in the State Open. The field hockey team won the Class L State Championship after an undefeated regular season. The “Rams of the Week” honorees “exemplified the department’s core values of responsibility, accountability, motivation and strength of character,” the NCHS Athletic Department said in a press release. Sponsor of the “Ram of the Week” include Karl Chevrolet, William Fessler, DDS and Walter Stewart’s Market.

During Tuesday’s selectmen meeting, Moynihan and Williams also voted 2-0 to approve these appointments and reappointments to volunteer municipal bodies:

While discussing the appointments above, Moynihan said, “The volunteers in this town are what makes this town work.” During his recently completed second term in office, Moynihan made headlines following the resignations, dismissals and non-reappointments of several volunteers, including Sperry DeCew (Police Commission), Pam Crum (Parking Commission), Judy Dunn (Health & Human Services Commission) and Mike Handler (Emergency Management).

Finally, Grace Farms on Dec. 10 had more than 200 people participating in “Gifting for Good,” with volunteers filling 1,004 backpacks with socks, toiletries, gloves, books, games, and food staples for preschool, middle school, and high school students in need. Grace Farms Foundation partnered with the nonprofit Filling in the Blanks, which is helping to deliver the backpacks to 32 schools and service providers around Fairfield County.