Town officials on Tuesday started the hiring process for the New Canaan Police Department to take on a 28-year-old Stamford woman as its newest officer. 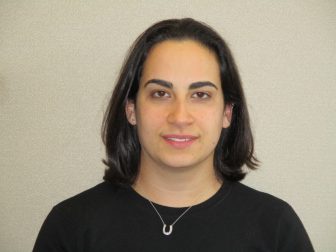 The Board of Selectmen’s 3-0 vote in favor of the classification and compensation for Nicole Vartuli clears the way for the department to hire its fourth female uniformed officer, officials said.

Vartuli, who underwent intense testing, was selected from a pool of 114 candidates, and the department is thrilled that such a decision improves the diversity of their officers, according to Police Chief Leon Krolikowski.

“We strive to hire the absolute best person, and when it turns out to help diversity it is a great victory,” Krolikowski said at the meeting, held in Town Hall.

He added: “It’s a very competitive market, and Stamford was actually on the cusp of hiring her, so we’re lucky that we got her.”

Vartuli has a degree in accounting, and was previously employed by the Stamford Police Department as a financial clerk, the chief said.

First Selectman Rob Mallozzi and Selectmen Beth Jones and Nick Williams all voted in favor of a starting salary of $61,303.12.

Williams, an attorney, said, “I run my firm’s hiring committee, and we hired twice as many females as males this year. I think it’s a great think thing.”

Jones added that there is always “strength in diversity.”

Mallozzi praised the department’s hiring system as a whole, saying, “Of your new hires, they’ve been terrific … This group that’s come in has definitely raised the bar. Their skill sets, their education background is right there. I have to commend our Police Commission.”

Vartuli’s swearing-in has been tentatively scheduled for 10 a.m. on June 27 at Lapham Community Center, in a ceremony that will also recognize the work of other officers. She will begin training July 7 at the State Training Police Academy in Meriden with an expected graduation in December. She then must undergo 400 hours of field training before becoming the force’s 47th probationary police officer.

During the meeting, Krolikowski cited a news piece which noted the diversity of the police force in comparison to the population of the town. Jones responded that such an accomplishment was “not a hard bar to reach, if that’s what you’re measuring it by. Jones, who is not running for reelection, also joked, “Am I too old to apply for the job?”