New Canaan Police at 2:07 p.m. on July 13 received a report of a bike stolen from Waveny.

Gloria Ann Calise Franco’s funeral will be held 10 a.m. Friday at Saint Aloysius Church and will be live-streamed here.

The Mobil on South Avenue appears to have the highest gas prices in the state, according to an article published on CT News Junkie.

New Canaan Chamber Music is holding an outdoor concert at 7:30 p.m. on Tuesday, July 26 at the Summer Theatre of New Canaan bandshell in Waveny. Details here.

During a special meeting Tuesday, after touring the property at 8 Husted Lane, documenting photographically and designating important elements for salvage, the Historical Review Committee voted unanimously to end the demolition delay there, according to the appointed body’s recording secretary, Rose Rothbart.

The Congregational Church of New Canaan is running Vacation Bible School from 9 a.m. to 12 p.m. Aug. 22 to 25. 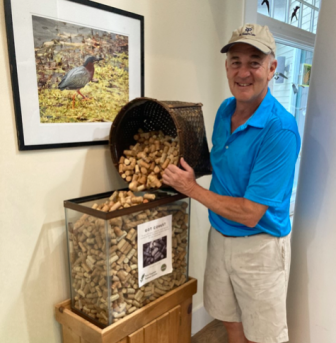 Conservation Commissioner Chris Schipper on Monday made a delivery of wine corks to the New Canaan Nature Center collection. “This recycling effort seems to be going well,” he said. “They’re going to need a bigger container.”

Captain Jack LLC on Monday filed eviction papers in state Superior Court against tenants of an apartment on Heritage Hill Road, saying they stopped paying rent following an increase in May from $2,550 to $2,850 monthly, according to the complaint.

Finally, a reminder regarding the following announcement from the town: Registrars of Voters, Joan McLaughlin and John Amarilios are preparing for the August 9, 2022 State Primaries for both parties. The Secretary has certified the following primary candidates:

There is no Election Day Registration for the Primaries.  The deadline for registering to vote for the Primary in Connecticut is Thursday August 4, 2022.  For many voters the districts, polling places have changed.
To be eligible, voters must be enrolled in the party having the Primary.  Unaffiliated voters may enroll in a party until 12:00pm Monday Aug. 8th. The eligibility deadline for switching parties for the Primary has passed.
Voters must be enrolled in the party to participate in either parties Primaries.  Seventeen year olds may register and vote in either primary if they will attain the age of eighteen by November 8, 2022.   The deadline for registering and/or enrolling in a party for the primary is Thursday August 4, 2022. Applicants may register or enroll in person, by mail, or by using the State Voter Registration website, https://voterregistration.ct.gov. This site also allows voters to verify their status, party enrollment, and address, and to update any information.
Absentee ballots will be available from the Town Clerk, Claudia Weber, beginning July 19.  For complete Information on the Absentee process, contact the Town Clerk at (203-594-3070).
Due to the state mandated Re-Districting of State and Town voting Districts,  New Canaan has gone from three districts to six voting districts.  The week of June 15, the Registrars mailed out letters to all voters assigned to a new polling place.  A new Assembly District (District 45, incorporating Wilton, and parts of Ridgefield and New Canaan) has been added.
Because of the redistricting, East School has been added as the third polling place for New Canaan.  District 1 (NCHS) is now represented by St. Sen. Dist. 36 and Assembly Dist. 125; District 2 (AD 36 and AD 42) and District 3 (SD 26 and AD 125) will vote at Saxe Middle School;  Districts 4 (SD 36 and AD 142), 5 (SD 26 and AD142), and District 6 (SD 26 and AD 42) will all vote at East School.
A map of the new districting, polling places, and representation is now on display in the lobby of Town Hall, and at the New Canaan Library. They will also be available on the town website and from a variety of sources. It is important that voters check with the state website, or the registrar’s office prior to voting.